Space 1979: The other one that’s supposed to be the worst movie ever 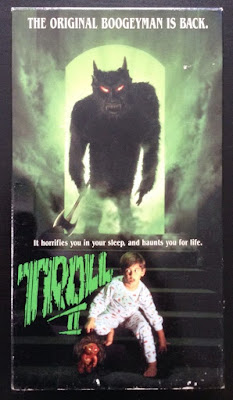 If there’s one thing people who know me don’t “get” when it comes to movies, it’s that I very rarely seek out movies just for being “bad”. No matter how notorious a given movie may be, I usually don’t watch it unless there is something about it that interests me on a deeper level. In hindsight, this feature has reflected that, to the extent that the occasional movie on others’ “worst” lists have ended up here more or less by chance. I planned to review Plan 9 From Outer Space before deciding on the form of this feature; I watched Space Mutiny as a suggestion; and I encountered Mac And Me in the wild all the way back in the 1990s. This time around, I’m back with one that has been widely listed as the “worst” movie ever, fittingly about as old now as Plan 9 was when it was released, and I’m doing it now simply because it came into my hands along with something else. Here is Troll 2, everyone else’s idea of the worst movie ever made.

Our story begins with a grandfather reading a young boy a bedtime story about goblins, a scene which ends with the revelation that the grandfather is dead. In short order, we meet the family, a bland mother and father and a sister, plus her boyfriend, who won’t choose between her and his sketchy friends. We also learn that the whole family is ready to go to a town called Nilbog. They get a more than warm welcome, but the grandfather appears to warn the boy not to trust them and especially not to accept the food they offer. Meanwhile, the boyfriend tries to make up for the couple’s latest fight by following in an RV he has somehow gotten hold of, with his friends still along for the ride. Soon after the second group reaches town, the dorkiest of the friends ventures out on his own and discovers the town’s secret: The inhabitants are really goblins, who have renounced eating meat at the command of a self-declared pagan priestess. But rather than leave humans alone, they are giving their visitors potions that turn them into plants and then eating them, as revealed in the movie’s most notorious scene… and all this is in the first 33 minutes of a 94-minute running time. Then there’s still an hour left! OH MY GAAWWD!!!

Troll 2 was an Italian/ American production from the company Filmirage, written and directed by Claudio Fragasso under the original title “Goblins”. The story was reportedly suggested by Fragasso’s spouse as a satire of vegetarians. In US release, the film was retitled Troll 2, after a 1986 film by Charles Band and the chronic offenders at Empire Pictures. While Filmirage producer Michael D’Amato was involved with the earlier film, both films and several others released with the Troll name are agreed to be unrelated. It is also unclear whether D’Amato either knew or approved of the Troll 2 title. The filming took place in Utah, with a mainly American cast that included the relatively accomplished Connie Young as the sister and author Deborah Reed as the villainess Creedence. Child actor Michael Stephenson went on to modest success as a writer and director, including a documentary Best Worst Movie about Troll 2.

For my personal experiences, it should go without saying that I heard of this one a long way back. I suppose what finally brought me to it was going through a multipack that included The Dungeonmaster and Creepers, one of the films known as Troll 3. (I will not acknowledge the title of the latter movie on the disc set, which is even more irrelevant than the “Troll” name.) That at least got me interested in the actual Empire Troll, which turned out to be relatively difficult to obtain without Troll 2, and that in itself should be enough said about the relative quality of the films. If I had bought any of the “series” packs then and there, I would probably have watched Troll and set the other movie aside indefinitely. Instead, I got a disc with both movies from Netflix, and I knew there was no way I was going to wait or pay to have it again. So I threw on Troll 2, and my immediate reaction was that I didn’t see what the big deal was. Yes, it’s bad, but I saw no reason for its notoriety (Creepers is certainly no better), at least up to the scene everyone knows about. But we can get back to that.

If there’s anything worth talking about as a “good” point for this movie, it’s the creatures and effects, and if you’ve seen the movie, you know that’s faint praise indeed. The goblins are fairly nondescript, realized with effects that are on par with a syndicated ‘80s-‘90s TV show. As rudimentary as the execution is, they “work”, conveying a genuine sense of ugliness, viciousness and low cunning. Things get a lot iffier with the human/ plant transformations. There are some good, creepy visuals of the infected bleeding or spitting green, notwithstanding the limits of the effects. The best visual is the discovery of one of the friends partly transformed, with a gruesome sort of suspense when the would-be rescuer tries to remove the plant matter from over his mouth. The one full transformation, however, is not nearly as well-done, and again, it happens at just past the half-hour mark.

That brings us to the one problem that is easily missed. Everything you need to know or learn to understand the story gets laid out well within the first third of the running time, and up to that point, it at least lives up to the “so bad it’s good” part of its reputation. But then, after the clip everyone laughs at, it just keeps going. It’s like a mystery novel where the killer’s identity is revealed by chapter 5. In the hands of a capable storyteller with a command of tension, humor and character development, it could have still been good, but that is certainly not in evidence here. As it is, we still get plenty of material that is bizarre enough to be amusing, especially from Reed and Robert Ormsby as the grandfather (the only role I can find evidence of). But these are increasingly isolated peaks in an unravelling mess of a story that I will admit I personally stopped trying to keep track of long before the end.

Now we’re far enough along for the one scene, and at this point I’ll admit one more thing: I started this review right at the limit of the time I normally allow between a viewing and a review, well after that disc went on its way back to where it came from (possibly Cocytus, the circle of Dante’s Hell that’s literally frozen over). Still, there was one scene that stood out to me as soon as I saw it. It happens a ways past the midpoint, when the kid starts to spy out the town. He manages to sneak into a gathering place of the townspeople and overhears their equivalent of a fire-and-brimstone sermon, entirely against the evils of meat. I couldn’t recount it without watching the movie again (and I really don’t want to), but I can easily play back the tone and inflections in my head, including an emphasis on “sausages!” It all sounds as equivocal as a minister slavering over the sins of carnality, raising the further question what the creatures were like before finding enlightenment. Of course, the kid accidentally reveals himself, and I don’t quite remember what happens after that, but none of it is any more interesting than the surreal sermon. It’s our clearest glimpse into the viewpoint and motivations of the goblins, and it definitely  brings out the satirical elements of the storyline. It even kind of sets up certain later developments, yet like far too many things in the film, it feels too isolated to improve the whole.

That brings us back to the status of the film, and especially how I would rate it. Usually, when I deal with films this notorious, I try to play defense. I gave Plan 9 a “good” review, and I found the likes of Space Mutiny, Planet of  Dinosaurs and Alien 2 to be at least technically competent. I cannot muster any similar good will for Troll 2, and I don’t have the kind of conflicted feelings that have brought me to use the “unrated” rating either (see House). What I find instead is an urge to resist the mob, if only to avoid giving the movie more “credit” than it deserves. Again, this is terrible by any standard, but it is certainly not the “worst” movie I’ve reviewed for this feature. (That probably goes to War of the Planets, with Space Mutiny and Inseminoid still very close behind.) Above all, I can’t find anything about this movie to make me actively hate it, which I have long since recognized as a better criterion than any other. If you want a bad movie that’s good for a laugh, this is by all means up your alley. If you really want to study a film that has no redeeming qualities or even unintentional insights to offer, keep walking, because it’s not going to be turning up here.