Space 1979: The one I thought was too bad to review 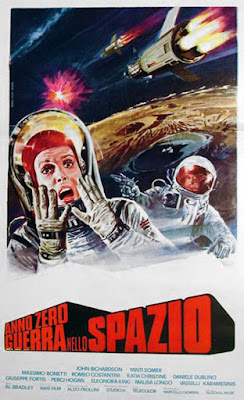 Back when I reviewed Laserblast, I first discussed whether there were movies too bad to be included in thisfeature. What this means to me is that all the movies included here have been chosen because there was something about them I found interesting and insightful, however unintentionally. That, in turn, comes down to the simple fact that, despite all appearances to the contrary, I don’t normally watch movies just to laugh at them for being “bad”. If a movie doesn’t offer something intriguing, I usually don’t watch it, and I don’t normally have much to say about it if I do. This time around, in keeping with the broadening of the field, I’m going back to a movie that put me to the test, a film I found so incompetent that I decided I could not work with it. I’m back for a rematch, and now it’s personal. Wait, no, that would be… boredom. At any rate, here is War of the Planets.

Our story begins with a shot of a spaceship that might be genuinely impressive on a good print, accompanied by music and sound effects that seem lifted directly from Space Invaders. We meet our crew and their captain, Mike Hamilton, a tough-guy captain who keeps getting in trouble for trusting his gut over the ship’s computer. We get some further misadventures for exposition, including a rescue of a panicky idiot (he might not have made it) and an encounter between Hamilton and a lady friend who further debates man versus machine. Something finally happens when they detect advanced incoming spaceships that aren’t from Earth. They follow the intrusion to its source, where they discover the remnants of an advanced civilization. Unfortunately, they also discover the cause of the race’s decline, a giant robot that stopped taking orders (possibly in anger at being cut from a Dr. Who episode) and its deadly mechanical warriors. It’s up to Mike to defeat the machine, and the machine certainly can’t count on intimidating him with superior reasoning.

War of the Planets was part of an estimated five science fiction movies directed by Italian veteran Alfonso Brescia, reportedly in response to Star Wars. The movies were known for heavily interchangeable sets, costumes and effects, to the point that casual researchers have been known to confuse them with each other.  War of the Planets was probably the first and most well-funded of the group, with a cast that included English actor John Richardson of One Million BC as Hamilton and Finnish starlet Yanti Somer as one of his lady friends. Accounts conflict whether the movie was made in 1977 or 1978, raising some further question how directly it was influenced by Star Wars. It is agreed that it was followed by the films The War of the Robots and Star Odyssey, of which the latter (featuring Somer) was released in Italy in late 1979.

For my personal experiences, this movie first came to my attention as part of a cheapie bulk DVD set I looked through very soon after thinking of this feature. The set listed it as from 1977, the same year as Star Wars, which was enough  to put it on my radar. I watched it not too long after that, and my immediate reaction was that this was a movie where calling it a knockoff was giving it too much credit. Everything about it feels like the true antithesis to what Star Wars and its better knockoffs and runnerups (especially Star Crash) accomplished. The dialogue is woody with a generous undercurrent of pompous smugness. The characters who aren’t actively annoying are barely there. Then as the cherry on top, most of the effects are painfully outdated they compare unfavorably to films from the 1960s, and not the “good” ones. Of course, my copy came with maximum public-domain indifference to quality, making the whole thing feel like Skynet sent its consciousness back to 1984 on a VHS tape. (See The Horror Express, because this isn’t even worth a new joke.)

After all that, it took me months to get back to this one. I finally watched it the day before writing this review, after literally going a night without sleep, because I keep  saying what other people consider “stoned” is what I go through without pharmaceutical intervention. For maximum effect, I got through most of it while working on a review of something else, more or less on the theory that peripheral awareness might better capture the essence of the film. After that experience, I won’t claim that I understand it any better. What I can say confidently is that I did not underestimate it before. Whether you’re carefully studying it or all but tuning it out, it will still feel the same: Inept, dull, and annoying.

Having gotten my way through this barely paying attention, there’s still the matter of the “one scene”. In fact, there’s one that’s bound to make an impression no matter how much you try to ignore the movie, and it’s when Hamilton meets the master robot. The whole thing looks like a cross between a tin toy, a slot machine and an orchestrion (look it up), and I’m absolutely sure the same prop appears in clips of War of the Robots. The  bot boasts about its power and perfection while railing against the weakness of its creators, who allowed it to be damaged by an attacking alien fleet. Of course, it then admits it needs assistance repairing its circuits, which it has totally drawn them to the world to perform and certainly didn’t run it all by the seat of its pants. All the while, its dialogue and delivery are egregiously self-confident even by this movie’s standards, and the script makes sure Hamilton points out it refers to the “Earthlings” with maximum contempt. Naturally, the tough guy momentarily gets the other hand, and the robot rattles off a last extravagant threat as it blows up.

In summary, all I can say is that if this barely feels like a review, it’s because this one is barely a movie. The one thing truly noteworthy about this movie is that it somehow got made the year Star Wars came out. What’s even more inexplicable is that it came from the same Italian studio system that gave the world the likes of Star Crash, Hercules and Zombie, a system that always nurtured pure creative energy no matter what the accompanying flaws. Call this the anti-review of the anti-Italian anti-Star Wars, and then let us never speak of it again.