Space 1979: The one with samurai, dinosaurs and Darth Vader 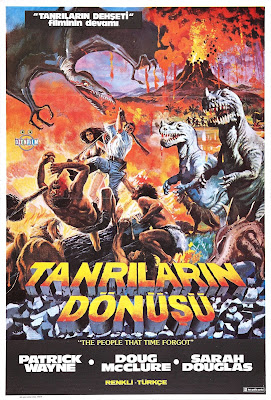 Title: The People That Time Forgot

If there’s one thing that might surprise anyone following this feature, especially if you know me or my earlier work, is that I haven’t done many dinosaur movies. To me, however, this was about what I expected. There were never that many dino movies, especially if you don’t count the kaiju genre, and by the 1970s they were getting few and far between. It’s been my inclination to only count the ones with stop-motion animation, which narrows things down to single digits. However, there was one set of films I’m willing to make an exception for, and I was sure I was going to cover at least one. I still put things off a lot longer, in part because I hadn’t watched the one that interested me most. I finally got around to it, and quickly concluded that it was indeed the one to cover. With that, I introduce The People That Time Forgot, the sequel to The Land That Time Forgot, one of the only good dinosaur movies without stop-motion.

Our story begins aboard a ship on an expedition to look for Bowen Tyler, hero of the original movie. We meet the new crew, led by standard-issue hero Ben, with a spunky lady photographer who goes by Charly along for the ride. They try to reach the icebound lost world of Caprona by biplane, leading to the inevitable crash. While they are trying to repair the craft, they run into a cave girl named Ajor, who reveals that Tyler taught her tribe the wonders of advanced technology, evidently including the bodice. Unfortunately, another tribe is on the warpath, killing or enslaving all in their path. Soon enough, they run into the leaders of the rival group, a warrior caste clad in something like samurai armor. The band is captured and brought to their lair, a temple built around a volcano where tribe believes their god dwells and speaks. The crew must race to plan their escape, or be the next offering to the volcano!

The People That Time Forgot was the last of a series of three 1970s films based on the science fiction/ fantasy stories of Edgar Rice Burroughs, following The Land That Time Forgot and At the Earth’s Core. Amicus Productions reported chose the book because they could not obtain the rights for John Carter Of Mars. The film was begun as a co-production between the British studio and American B-movie mill AIP (see Futureworld), but released under AIP’s name alone after the former studio went bankrupt. Patrick Wayne was cast as Ben, with Douglas McClure returning as Tyler in the final act. The roles of Charly and Ajor went to Sarah Douglas of Superman II and singer/ actress Dana Gillespie respectively. The late David Prowse appeared in a minor role, listed simply as the Executioner. Wayne also appeared in Sinbad And The Eye of the Tiger the same year, which was likely filmed first apart from effects by  Ray Harryhausen.

My experiences with this movie go back long before I knew anything about it. When I was a kid, I watched The Land That Time Forgot on TV. I loved it then, and it didn’t surprise me to learn that it has remained an accepted “classic”. However, when I finally picked it up a few years back, I didn’t quite get back into it, and it never felt like a good fit for this feature. I gave stronger consideration to At The Earth’s Core, which is like viewing a Godzilla movie on bad acid (even more so than the 1970s Godzilla movies), but it didn’t quite suit my needs either. My interest stayed on this one, which I had all along on the same disk as the first movie but hadn’t gotten around to watching. I finally watched both movies in a marathon, and while I still argued with myself a little, I knew the sequel was the one that belonged here.

The main thing that stands out about this movie is that it’s quite different in tone from the first movie, and I find it more agreeable. The original movie is startlingly dark giving the concept and genre, with much of the action being human-on-human violence that’s all the more uncomfortable between the stone-age natives and armed explorers. This one is pulp adventure through and through, with more sword fighting than gunplay. It also offers a much simpler story, without the wonky science the first movie carried over from the books. In the bargain, we get two interesting and self-reliant heroines, who only need rescuing once or twice and never quite become romantic interests. Surprisingly, the relative weak point is the lead villain, a glowering, almost silent fellow who looks like a professional wrestler. Fortunately, this is more than made up for by his completely surreal minions. It is surely Prowse who wields the sword in preparation for a sacrifice to the volcano, and he continues to make a good accounting in the ensuing fight if you’re looking for him. The volcano-god gives a nice extra touch. Unlike in At The Earth’s Core, it is never resolved if this is a “real” being, a believed myth or a less tangible animistic force, which works much better.

Naturally, there are the dinos, portrayed entirely with puppets and other “practical” effects. If anything, they look better than in the preceding films, which unfortunately isn’t saying that much. The early high points are a pterosaur and a semi-friendly stegosaurus, leading to some further good fun when the explorers try to get the stego to pull the plane out of the mud. Things take a turn for the worse when a pair of carnosaurs appear, looking like rejects from a Toho movie. Toward the final act, it gets absolutely incomprehensible when the band runs into a beast that doesn’t even look like a dinosaur. In fact, I almost immediately concluded that it looked exactly like a pareiasaur, a sort of proto-lizard that lived and died out before the dinosaurs, easily both the ugliest and the most hopelessly non-threatening  creature on record. (Even more inexplicably, Wikipedia agrees with me!) It’s portrayed with a full-sized rig they really try very hard to make threatening. It does ultimately prove formidable enough to hem the band in by sheer mass, but it acts like a mastiff that thinks it’s still a puppy, literally doing more damage to a sack than any of the people.

For the “one scene, however, my pick is the above-mentioned pterosaur, the very first to appear on-screen. Our very first sight of it is the long head coming into the frame, almost mockingly similar to the shot of the mile-long destroyer in Star Wars. Ben spots it as it circles, referring to it simply as a “pterodactyl”, though the toothy bill belong to the rhamphorhynchid line of the pterosaurs. We get a closeup of its grim visage as it approaches the plane, and the creation could pass muster even today. Further shots make it clear that the creature is much larger than an ordinary bird but still considerably smaller than the plane. It begins snapping and clawing at the plane, tentatively enough to suggest curiosity and confusion as much as aggression, yet even hesitant attacks are clearly taking a toll on wires, wood and canvas. For some reason, it’s the scientist along for the ride who tries to fend off the creature with a machine gun, perhaps succeeding temporarily, but it soon returns. Right about then, it finally strikes at the propeller, with results that are clearly disastrous for the creature and machines. It’s a well-done and effective scene, even compared to stop-motion sequences from masters like Harryhausen and Willis O’Brien, and it’s still one of the only depictions to come to my attention that gives something like a realistic picture of a pterosaur’s size and likely capabilities.

Like Sinbad and the Eye of the Tiger and Planet of Dinosaurs, The People That Time Forgot came out the same year as Star Wars, ultimately a major reason I decided to include it. It is in many ways as good as Eye of the Tiger, let alone the semi-amateur Planet of Dinosaurs, but for whatever reason, this is the one that has been largely forgotten. That’s a shame, because it’s certainly one of the better vintage dinosaur/ “lost world” movies out there. Its most impressive achievement is simply that it feels like an early-1900s pulp story, at a time when plenty of higher-budget movies were trying the same thing and failing. The fact that it wasn’t appreciated then or since is a further sign that the rest of the world was moving on, and worse for it.