Space 1979 Holiday Special: The one that's a cop movie 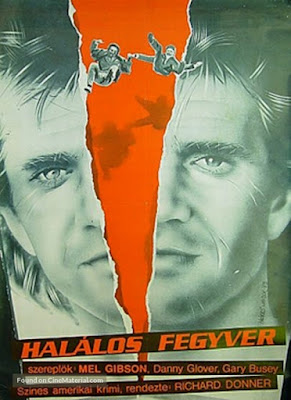 Throughout the time I’ve done this feature, there have been movies here and there that I knew didn’t “fit” but still wanted to review just to say something about them. I still reviewed a few that remained broadly in the SF/ fantasy genre, like House and Phantom Tollbooth. Quite a few more got farmed out to other features, like An American Werewolf In London and Hancock. But there was one that kept coming to my mind, not because I find it “science fictional” but because it kept intersecting with other movies I was covering. After a while, still well before the present review, it helped put the idea in my mind to do one or a few movies out of “genre”, simply as a kind of control group for what was going on in the wider world. With the holidays just around the corner, I decided it was time to get to it, and that I still wanted to do it here. With that, I present Lethal Weapon.

Our story begins with a spaced-out lady gazing down from a hotel room balcony, before taking a swan dive almost as an afterthought. We then meet Murtaugh, a friendly black detective, and his new partner Riggs, who the less-than-helpful police psychologist insists is suicidal. After a few minor adventures that seem to fully justify the assessment, we get back to the girl on the balcony. It turns out that she was poisoned before taking her own life, and that she is the daughter of an old friend of Murtaugh’s. When their leads keep dying, the two hero cops suspect they have found something bigger. That’s when the lady’s dad confesses that he has been part of a drug-smuggling ring run by a former (?) general and his crew of mercenaries. His big confession is cut short when he is picked off by the leader of the henchmen, Mr. Joshua. But the cops are in the bad guys’ sights, and shortly, Murtaugh’s own daughter is captured. Riggs and Murtaugh are on the warpath, and it’s personal!

Lethal Weapon was a Warner Brothers film released in 1987, part of a wave of action/ adventure films that also included Predator, Robocop and The Hidden . The feature was directed by Richard Donner, who had directed the first Christopher Reeve Superman movie. The film and subsequent sequels were remembered as a breakthrough for Mel Gibson, previously best known for the Mad Max movies. Danny Glover was cast as Murtaugh, shortly after a turn in the historical drama The Color Purple. The additional cast included Tom Atkins of Night of the Creeps as the grieving father Hunsaker and Gary Busey as Mr. Joshua. Producer Joel Silver also produced Predator, while writer Shane Black played a supporting role in that film. Glover and Busey were again cast together in 1990’s Predator 2, along with the late Bill Paxton of Aliens.

This is one of the movies where my memories go further back. To begin with, police-procedural movies were a big part of what pop-culture exposure I did receive in the late 1980s to early ‘90s, maybe even more so than sci-fi films. I’m sure I saw Lethal Weapon and the first sequel on TV in junior high if not a bit earlier, and I recall having a tape of the original at one point. Anything I saw would certainly have been edited/ censored, including the tape. I can further remember being fully aware of the Christmas setting and references, including a clip from the Alistair Sims version of Christmas Carol, well before I saw Die Hard or heard it mentioned as a “holiday” film. I was watching the franchise well into college, before it finally dropped off my radar. Moving forward, I first thought of covering this movie when I reviewed The Hidden, and again around the time I covered InnerSpace. I gave the most thought toward creating a separate feature for police movies. In the end, however, I decided it belonged here.

Now backing up a little, I finally looked up this movie just a few years back. At the time, I genuinely expected nothing more than fond memories. Going in, I didn’t have any high expectations; under normal circumstances, evaluating an ‘80s actioner for its realism or even coherent plotting would be like critiquing a Godzilla movie for its paleontology. The recurring problem is simply and precisely that this was the one that was going to be “serious”, when in reality it fares worse than many of the ones that were “supposed” to be dumb. It’s one thing to have highly trained paramilitary mercenaries who are massively over-equipped for their job yet still bad at it. It’s another to openly show most of the real work being accomplished quite handily by an expendable dirtbag or two. To me, it takes an extra hit for its handling of mental health, which would be a trigger for a much longer rant. Anyone who talked about checking himself out as much as much as Riggs is the kind who’s already trying to talk himself down. It’s the eerie silence of the girl at the beginning that rings chillingly true.

Of course, this isn’t to say there aren’t good points. The acting and dialogue are good, as they should be for the cast. The action sequences still hold up better than plenty of far more recent blockbusters. It’s worth further note that these include a surprising number of near-static visuals, especially a shot of a smuggler trapped with a pile of drugs and a clutch of grenades. Most importantly, there are a lot of genuinely fun moments, especially from Busey. What I find myself wishing for is that it could be done over as a “real” police procedural. Replace most of the mercenaries with thugs out for a buck. Show Murtaugh fighting for an investigation of what amounts to scum killing other scum. Let the paramilitary conspirators tell the “other side”, especially about all the dealings they must have had with politicians and officials who pulled them out of Vietnam but then backed the “drug war” at home. While we’re at it, let Hunsaker stay alive long enough for a redemption arc, or at least a talk with Riggs about grief.

For the “one scene”, as a first, I’m going with one that was deleted from the theatrical release, something I didn’t figure out until I went looking for it on a DVD I acquired for this review. In a sequence originally near the beginning of the movie, Riggs responds to a report of a sniper shooting up a school, something which had in reality happened only once. He learns that offender is firing on both children and police, all while an officer carries away a wounded child. He then approaches the building, ignoring warnings from another cop and a volley of fire from the shooter. Riggs promptly calls out, “Why do you only do kids?”, then returns fire. It’s a bizarre and baffling sequence, especially for its time, but it is certainly as effective as anything that stayed in the movie, to the point one may wonder not only why it was cut but why it wasn’t the main storyline.

The bottom line here is that this movie suffers most when compared to sci-fi genre films. Look at Robocop and The Hidden, released the same year, or Night of the Creeps, made a little earlier with Atkins in a starring role, all movies that worked as science fiction and police adventure without skimping on story, character development and social commentary. Look at Deep Space from a year later, a direct-to-video knockoff that still got the police-procedural part mostly right and worked in some decent gags about ‘80s masculinity. You can even count The Punisher, a revenge story that made the good guy and the bad guys interesting in the midst of literal comic-book action. They might not be counted as better than Lethal Weapon (though I would absolutely say that some of them are), but they were covering the same ground in the same time period without expecting the rest of the world to give them a pat on the back. If anyone questions whether 1980s science fiction has remained relevant, this should be all means be the answer, that the genre films were handling “serious” themes at least as well as “straight” ones and sometimes doing it first.