Space 1979: The one with the worm apocalypse 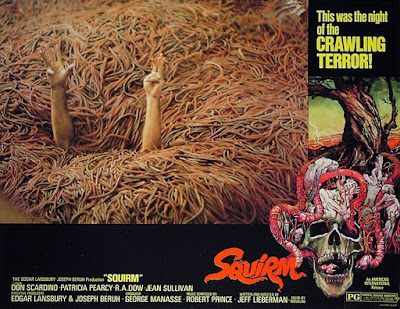 Something I’ve commented on in the course of this feature is that there were some counterintuitive dry spells within the broader science fiction genre. The big one I have previously pointed out was the “alien invasion”, which had its heyday in the 1950s but became uncommon by the 1980s. (See Killer Klowns From Outer Space.) Another subgenre with a surprising gap is the “monster movie”, by my definition a conflict with a creature or creatures without advanced weapons or technology. The arc of that subtype is more difficult to define, but it definitely went through a major decline during the 1970s, arguably right up to the surge of interest that came with Alien at the very end of the decade. In fact, when I really considered the matter, there were only two examples that stood out which also satisfied me as in the sci fi category. One was Phase IV, previously reviewed. The other is the current selection, a very odd little entry with the charming title Squirm, and we’re going to see why.

Our story begins with an expository block of text, outlining a purportedly true story of an incident involving a downed power line. We then meet a young lady named Geri living with her mother and younger sister, all with accents so thick one might wonder if they got the news the South lost the war. The family is receiving help around the house from a neighbor named Roger, who clearly hopes for something more, but Geri is clearly more interested in a newcomer named Mick, who comes from the big city on the pretense of looking for antiques. Meanwhile, a major storm has disrupted power and transportation, and for some reason, a number of large earthworms are turning up. Soon, the creatures are becoming s nuisance or worse, clogging pipes, contaminating food and drink, and possibly leaving behind a skeleton. (I honestly couldn’t tell.) As the worms overrun the town, Roger goes berserk from his hatred for worms (tied to his family’s bait shop) as well as his yearning for Geri. As night falls, the heroine finds herself in the path of both the worms’ onslaught and Roger’s rage, and only time will tell which is deadlier.

Squirm was written and directed by Jeff Lieberman, reportedly based on a childhood experience where a family member caused worms to emerge with electricity, as shown in the film. (It is possible this was really an effect of heavy rain.) It was part of a minor wave of ecologically-themed “killer animal” horror and science fiction films following 1963’s The Birds, with other notable examples being Phase IV and The Frogs. An estimated 3 million live worms were used in filming, though about half of those shown onscreen were rubber. Patricia Pearcy, also known for the horror film Delusion , was cast as the heroine, after Kim Bassinger was auditioned for the role. The film was distributed by the infamous B/ exploitation mill AIP (see Futureworld and The People That Time Forgot), apparently based on the further hope that it would receive a PG rating. The film received mixed reviews but won favorable attention in genre reference works like Peter Nicholls’ Fantastic Films. The 2003 DVD release appears to be a 93-minute R-rated cut; versions available for streaming may be an edited 92-minute “PG” cut.

This is yet another movie that I heard of well before I saw it, except this time, I still only read about it in a handful of places. I can’t recall when I first looked it up, though I think it’s very possible that was more than 10 years ago. After watching it for this review, all I can say is that this is still one of the most surreal movies I have encountered. What stands out, as with quite a few of these movies, is that it all sounds quite routine when recounted on paper. The concept is as standard as you can get within its relatively peculiar genre; it’s worth further note that it’s free of the supernatural overtones of Frogs or the arguable psychological horror of Willard. The further love-triangle melodrama is entirely routine, with the Deep South trappings only adding to the checklist of cliches. If one read about it in cold blood, one might well take it for a routine monster movie and move on.

What a straight recounting can’t easily convey is the atmosphere of the film. It isn’t stylish enough to capture the “Southern Gothic” atmosphere of classic horror tales like “Pigeons From Hell”, nor does it try to catch up with newer films like The Frogs. What it does provide is a genuine sense of isolation, heightened by effective establishing shots, convincing sets and locations, and a surprising amount of humor that sets just the right dysfunctional tone. In overall effect, the movie does at times reach toward the feel of Robert E. Howard’s tale, while at others, it feels as clinical as Phase IV or The Andromeda Strain. Matters are helped by decent acting and dialogue, made far more believable by the low-profile cast. Then… then there are the worms. Dear Logos (by the way, that's a name of God in the actual Bible), the worms.

It’s the worm sequences that are truly indescribable. As already noted, the movie used a combination of genuine worms and rubber effects, and there is never much doubt which is which. The closeups of the live worms are utterly unnerving; these are bristling, toothy monsters that look about as much like a cartoon-cutesy earthworm as a teddy bear looks like a grizzly, only slightly detracted from by weird bestial sound effects. The few attacks start to cross over into straight-up horror, notably a sequence that leaves Roger disfigured and more enraged than usual. But the movie doesn’t hit its hypnotic stride until the finale, as the worms literally destroy the farmhouse where Geri resides. What’s unique and impressive is that by this point, it’s not clear that the worms are actively attacking (the state of the effects mostly just lets them pulsate), but then, they don’t really have to. Their sheer mass is enough to overwhelm anyone and anything in their path, as established in one ludicrous shot after another. When Roger (literally!) pops up again, he feels like just one part of the elemental mass.

For the “one scene”, I had a harder time than usual. Still, there was one that stayed with me from the very first viewing, involving a sheriff I haven’t even mentioned. Towards the end of the film, we leave the farmhouse long enough to visit the jail in town. We discover the sheriff with the waitress and proprietress of the town’s bar/ restaurant, whom we previously met in a dispute over a worm in Mick’s drink, under the covers on a bunk in the jail cell. As they snuggle together, the lady looks bemused, but then says, “Stop that.” When the sheriff acts confused, she simply says, “That.” Of course, we then see that the worms are literally pouring in, and the camera cuts away to the sound of their screams. It’s corny, it’s distasteful, but like many things here, it does its job.

All in all, this is one I “should” like a lot more than I do, and I certainly don’t dislike it. I suppose there’s just a little too much that doesn’t quite resonate with me, and it doesn’t help that there’s at least one whole subplot I can’t follow. Still, I can certainly appreciate it for what it is and what it did well, and that’s enough to keep it solidly middle of the road. It’s worth a watch, and you just might like it even better than I do.