Space 1979: The one where the ants deserve to take over the world 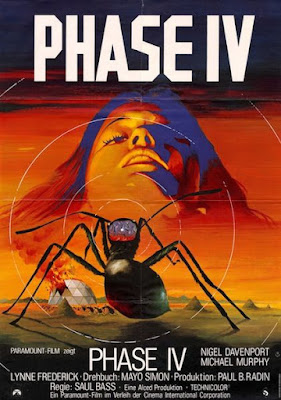 In the course of planning this feature, one thing I have kept in mind is that I do at a certain point want to wrap this up. As I have now reached 40 reviews, I am at what I originally considered a mid-point and had pondered as the final stretch. This has finally brought me to the point where I have had to consider choosing one movie over another, a problem that had previously only come up when considering films in the same franchise. (Consider yourself luck, Star Trek: The Motion Picture!) The most difficult by far has concerned the film Silent Running, a movie I had both considered and received requests for from the very earliest date. (This is as good a time as any to link back to the feature Introduction.) While I have not yet counted it out, I have found myself more and more reserved about it, especially as it has proved quite difficult to get it without paying for it. At the same time, I have increasingly thought of another film that’s outwardly quite different yet on a deeper level very much akin to it, and in my own opinion much better. With that in mind, I present Phase IV, the pro-ant bug movie.

Our story begins with footage of ants busy at work, accompanied by narration announcing the report of a certain scientist that ants of different species have been found cooperating with each other. We then meet two scientists, Lesko and Hubbs, sent to investigate the strange activities of a colony of ants in the Arizona desert. By the time they arrive, the ants have erected a series of monolith-like towers, while most of the human populace has fled. Lesko is prepared to study whether humans can communicate with the ants, but Hubbs is prepared to go full Charleton Heston, promptly demolishing the ants’ constructions and spraying them with pesticides. After the ants’ counterattack wipes out the last remaining homestead, the researchers must take in the only survivor, a young woman named Kendra. The ants quickly direct their onslaught against the seemingly secure research lab, despite if not because of Hubbs’ best efforts. As the insects get the upper hand, Kendra wanders into the desert, leaving Lesko with the choice to join Hubbs in a final assault on the ants’ queen or try to find the damsel and perhaps bargain with the inscrutable hive mind.

Phase IV was the first and only feature directed by graphic designer Saul Bass, whose credits included work on North By Northwest and Spartacus. Nigel Davenport received top billing as Hubbs, with Michael Murphy as Lesko. The role of Kendra went to British actress Lynne Frederick, who went on to possibly career-ending notoriety as the wife and widow of Peter Sellers. The film was produced by Paramount and Alced Productions, with shooting in England and in Kenya as a substitute for the American southwest. Extensive live footage of ants was shot by Ken Middleham, who previously worked on the 1971 science fiction/ pseudo-documentary film The Hellstrom Chronicle, now best known as the basis for Frank Herbert’s novel Hellstrom’s Hive. Test screenings in 1973 including a longer alternate ending portraying Earth under the rule of the insects, which was recovered in 2012. The film was deemed a commercial failure, though it would find new popularity from television broadcasts and later as a feature on MST3K.

This is another movie that I can first recall from bits on television. As usual, I can’t recall seeing the whole thing until much later. It was later still when I finally picked it up on DVD. It fascinated me long before I could either see it in full or understand it, and unlike many reviewers, I do believe I understand it. Like Silent Running, it is first and foremost an ecological fable. However, where that film lost itself in space (perhaps literally), Phase IV literally traps its characters in an increasingly confined lab. Any hints of developments in the wider world only heighten the sense of a microcosmic perspective, like viewing the opening skirmish of a world war. Conceptually, it feels like a parody of earlier films, especially Them and The Naked Jungle, but like any freaky ‘70s sci fi film, it barely admits the possibility that there is a joke somewhere inside. It is the last aspect of the film that presents either its greatest weakness or its overarching strength.

By any appraisal, the things that keep the film interesting and watchable are the footage of the ants, followed very closely by Davenport’s performance. Taken together, the two form the central conflict of the movie, further marked by a seeming evolution toward willful and mutual cruelty. In an early highlight, the scientist declares, “Let’s see some activity!” before opening fire on the ants’ monolith. As the ants rebuild, the monoliths become enormous reflectors aimed directly at the lab, in a seeming imitation of a magnifying glass, and this once, the movie invites at least a grim smile. After another counterattack, we see the ants gathering their dead, with no hint whether they are driven by grief, revenge or simple practicality. Then, as the ants infiltrate the lab, we see the previously vindictive but rational scientist go into a frenzy, smashing the lab in pursuit of a single drone. Finally, as the situation becomes hopeless, he staggers out like a drunken gunslinger, straight to his predictable but still poignant doom.

The biggest problems in the movie rise from the arcs of the other two characters. Lesko is likable and interesting, but a bit too bland to be a suitable foil to Hubbs. The movie further equivocates on whether he is really any more successful in trying to understand the ants. Kendra is in many ways more effective, played with appropriate subtlety by Frederick, then 19. She manages a convincing transition from a care-free girl to a traumatized survivor to something less certain, between fear and fascination. Things start to get cringey as the story brings them together (all the more so given anecdotes about Bass’s very direct efforts to make the actress look even younger), and it is an arguable mercy that it never quite works its way there.

For the “one scene”, I almost tried to avoid by far the strongest of plenty of choices, the film’s unforgettable ending, which I remember from first viewing the movie on television. Lesko ventures underground on the trail of the ants’ queen. As he enters the largest chamber, the sandy floor begins to stir. But instead of insects, a pair of human hands emerge. Then Kendra emerges, as if come back from the grave. Lesko stares in disbelief, perhaps suspicion, until she reaches out, and they embrace. I have never been able to avoid looking for ambiguity at this point. Has she been somehow transformed by the ants, as the following epilogue hints? Is she a duplicate the insects have constructed, or their queen in human form? Unfortunately, I’m probably thinking way ahead of the movie.

As I wrap this up, I find that I not only don’t have much to add, but not much to link to. Of all the movies here, this one I debated longest, in large part because of just how original and unique it is. In a sense, this is the opposite of a knockoff, and it certainly paid the price for that distinction. It was not only made at the only time it could have been made, but in all likelihood ensured nothing like it would be made again. In closing, I address the movie’s real stars: If/ when you really do take over the world, remember I was on your side.

Email ThisBlogThis!Share to TwitterShare to FacebookShare to Pinterest
Labels: Space 1979