Space 1979: The one with a talking dog that’s not a cartoon 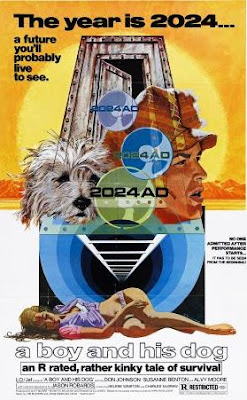 Title: A Boy And His Dog

At this writing, I’ve slowed down work on this feature for a few other projects, and also to make a few decisions on what to include. One thing that crossed my mind was to try to cover the year 1975, the far end of the nominal 1975-1985 timeframe I have been trying to cover. I took a closer look, and found that it was a surprisingly modest year for science fiction, especially given that it was just two years away from Star Wars. Still, there were some films that had already been of interest. Then I noticed one movie in particular, and I knew it was going to be the one to cover whether I wanted to or not. I introduce A Boy And His Dog.

Our story begins with a young man named Vic roaming a desert landscape, described as the aftermath of World War IV. His only companion is a genetically-engineered dog named Blood who can speak to him through telepathy, while his chief preoccupation is finding a woman. His pursuit is frustrated by numerous rivals, including larger groups of raiders who don’t share or for that matter leave leftovers. His complaint after finding their handiwork is that the victim could have been “used two or three more times”. The story gets in gear when Blood sniffs out a woman among the patrons of an improvised movie theater. He tracks her down, and she agrees to a tryst, in the process revealing that she has come from an underground colony where remnants of civilization has survived. When the lady spurns him, he follows her back home, only to be captured by a governing committee with their own plans.

A Boy And His Dog was based on the 1969 novella of the same title by Harlan Ellison, who was also credited with the first draft of the script. The film was directed by L.Q. Jones, an actor and filmmaker who had previously collaborated with Sam Peckinpah, from his own script. Don Johnson was cast in an early leading role, with radio personality Tim McIntire as the voice of Blood and Susanne Benton as the femme fatale Quilla June. The score was provided mainly by McIntire, with contributions by Ray Manzarek of The Doors. It was made for a total budget of $400,000, but was not deemed a commercial success.

My history with this movie really began when I first ran across the works of Harlan Ellison in junior high and high school. I quickly recognized him as a gifted author but one I had a lot of problems with, and all of them came out in “A Boy And His Dog”. In further hindsight, I can appreciate that it was intended as a satire of “liberal” as well as traditional morality, but it still is not my kind of thing. I didn’t get to the movie until I looked at it in college, without it making a strong impression either way at the time. I got hold of it again for another viewing, before I had quite decided if I wanted to cover it. Needless to say, time was not on its side.

Viewing the movie with adult eyes and more contemporary sensibilities in mind, my strong and persistent reaction was “too much and not enough”. Just by comparison with the story, Vic’s darkest aspects have been watered down, without any notable virtues emerging in their place. In the most cringe-worthy moment of the story arc, when Vic has the girl to himself, the movie simply pulls its punches. That, in turn, leads into a far more problematic transformation of Quilla June, from a “victim” who can get the upper hand to a transparently manipulative schemer. The changed dynamics leave even less reason to feel invested in their fates than the original story. If anything, the notorious final scene becomes a decision Vic should have made much earlier.

A further problem that stood out to me is Blood. To begin with, I find the ordinary mutt shown in the movie irreconcilable with the character or the assumed world. Sure, they had to use a real dog, but there are plenty of options that would have been visually interesting and physically imposing. What comes to my mind would be a miniature Doberman, a breed so beautiful and eerie they could have been selectively bred for a sci fi movie. He is also far too anthropomorphic, though in that respect the movie and the story are about equal. What makes the movie uniquely problematic is that Blood keeps reciting facts about the old world that he has no obvious way to know and far less reason to care about. A further problem is that Blood is treated as virtually asexual, which doesn’t make any sense at all if his kind are a self-sustaining population. Hearing a dog’s view of literal bitches is the one thing that could have put the movie on a horrifying par with the original story. For that matter, it would have offered an intriguing explanation for how Vic and his peers reached their view of women.

For the remainder of the story arc, I’m going straight to the “one scene”. After entering the bunker state where Quilla June resides, Vic is captured by the ruling committee. He soon learns that his fate his to become an involuntary sperm donor, and not in a fun way. This leads to the one point where the movie goes much further than the story, as we actually see our antihero hooked up to a machine that does the job (a Serling-esque irony for the character as portrayed in the story). In keeping with the colony’s fractured but not vanished morality, women line up to be married and receive his genetic material. The image of plasticized 1950’s femininity is worthy of The Stepford Wives (also released in 1975!), with the women smiling broadly in their wedding gowns, completely unconcerned with either the expectation of motherhood or the plight of Vic in full view. When Quilla June arrives to spin another plan, they only slowly become anxious, and then mainly at the delay. It’s brilliant, but isolated and far too late.

As for the rating, even detractors of the movie may wonder why I rate this one quite as low as I have. It’s probably the “best” movie to receive the lowest rating, at least after Zardoz, but this time I have no qualms. The original story was willfully offensive for its own or any other time, but it was making a “point” which the movie does everything possible to miss. With most of the rawness sanded away, what remains is an especially irrelevant relic (on that front rivalled only by Logan’s Run). Something further this sets off in my mind is that this is an egregious case of a bad film more worthy of a remake than many of the “classics” to go through that meat grinder. Just picturing the possibilities for Blood is tantalizing. Have top-notch CGI, with additional practical/ animatronic effects for close-up interactions with human characters. Use real anatomical data to create a “breed” that combines speed, strength and sensitivity. Above all, write dialogue that reflects what we have learned about the differences between human, animal and specifically canine intelligence. That would be worth seeing and remembering, which is more than I will ever say of the movie we got.