Space 1979: The one with the clown apocalypse 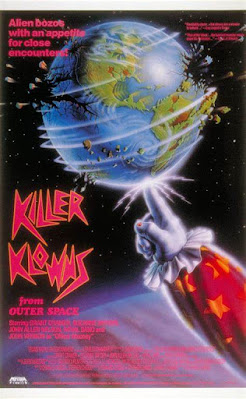 As I write this, it’s approaching Halloween, and I’ve been taking a bit of a break from this feature to get to a few other things. However, I have been using the time to make some further decisions and take a look at some movies I hadn’t made up my mind about. In the process, I finally got around to covering one I suppose was always going to be here. It’s one of the latest of the 1980s “cult” movies, and easily among the strangest, and if you’re into ‘80s movies you could probably guess this one without the title. I give you Killer Klowns From Outer Space.

Our story begins with a group of teenish miscreants who lounge around a lovers’ lane without ever talking about school, including our nominal protagonists Mike and Debbie. They see a falling star that also attracts the attention of an old man. They discover what looks like a giant circus tent, but is really a huge spaceship full of aliens who look like clowns. But these clowns are not out to entertain. Instead, they begin gathering the townspeople for food, preserving their victims for future consumption in cotton candy cocoons and oversized balloons. After a narrow escape, Debbie and Mike go to her ex-boyfriend Dave, a rookie cop, but the town sheriff flatly disbelieves them, even when calls begin to pour in from the rest of the town. When the clowns capture Debbie, Mike and Dave must team up to infiltrate their ship, with a little help from a pair of ice cream men. However, the rescue mission becomes a fight for survival when they run into the biggest and deadliest clown of all.

Killer Klowns From Outer Space was the only feature length film by the Chiodo Brothers, an effects crew responsible for Critters among other films. The clowns were portrayed with fully animatronic heads, though the concept called for them to be human-like in appearance. The cast included low-budget veterans Grant Cramer and Suzanne Snyder as Mike and Debbie, with eventual screenwriter John Allen Nelson as Dave and typecast authority figure John Vernon of Dirty Harry and Animal House as Chief Mooney. Despite the elaborate effects, the film was made for only $2 million (about the same as Zardoz in 1974), and by prevailing estimates made about as much at the box office. Some of the clown masks/ puppets were reportedly reused for Ernest Scared Stupid in 1991. Reports of work on a sequel or reboot have continued through 2019, when it was announced that Disney had cancelled the project on acquiring the rights from Fox.

For my own experiences, I can’t recall exactly when I first saw this movie. I did have it in mind when I first thought of this feature and especially the Irreproducible Oddity category. If anything, that’s an understatement for this one. Zardoz was made when lots of people were making post-apocalyptic sci fi, Krull was made when lots of people were making fantasy films, and Shanks was made when lots of people were making zombie movies. But absolutely nobody else was trying to make a film like this one. This was a major reason I took so long to get to it, as I considered it using it to start off another feature, but there was simply nowhere it would fit. It’s certainly not a zombie movie, though it has a lot more in common with that genre than you might think. It doesn’t satisfy me as a monster movie, either. What it really draws from is the “alien invasion”’ genre, which was in a counterintuitive dry spell in the 1980s, except there was certainly no invasion like this one. It feels like what would happen if the aliens of War of the Worlds or Earth Vs The Flying Saucers decided to skip conquering Earth and just go on one wild bender.

That brings us to the clowns. About four of them stand out to me: the dwarf clown, who gets a sympathetic moment when a group of bikers harass him; a mischief maker who shows up at the police station; an old, sleepy-looking clown that wanders the mothership; and an absolutely demonic specimen that races along on a motorcycle. One gets a sense of personality from the individual clowns, but all of them show the same malevolent indifference toward humans; most of their “pranks” amount to toying with their victims like a cat with a mouse. I cannot avoid associating them with the “uncanny valley” debate. The creatures are clearly intended to look human or humanoid, but are all the more unnerving for it. At the same time, they are far more convincing and naturalistic in their expressions and mannerisms than any number of more sophisticated creations then and since. The strongest comparison that rises to my mind is Howard the Duck, which literally turned a cartoon character into live action, and there is very much a sense of that here. One more thing easily overlooked is that, apart from the dwarf clown, they tower over the human cast members. Looked at with a critical eye, it’s clear that this was as much a technical limitation as a specific decision, yet there’s no denying the effectiveness in the surprisingly few scenes when they get close to the human characters.

It is in fact the human characters that are the weak link here, and the main reason I don’t rate the film even higher. From the start, the quite thin story isn’t the kind that would support a lot of character development. On the other hand, there are plenty of movies with premises just as simple (The Last Starfighter comes to mind) that make up the difference with good dialogue between interesting and likable characters. Here, most of the characters including the damsel hover between bland and annoying. By my appraisal, the one character likable enough to root for is Dave, to the point that I can picture remaking the movie just to put the focus on him. Better still, let Chief Mooney, who is at least funny, stay alive long enough for some kind of redemption arc. Alas, these are all firmly in the realm of “what if”.

As it is, Dave gets in with the “one scene”. A bit past midpoint, he returns to the police station after witnessing the clowns’ mayhem, where we already know one of the clowns has overpowered Mooney. Now, we see the aftermath. The walls of the station are painted brightly with polka dots and oversized footprints. Then the clown comes into view, a moment before Dave sees him, with Mooney in his lap in a mockery of a ventriloquist’s act. Of the “character” clowns, this is perhaps the most cunning, and the scene and shots make him more genuinely menacing than usual. Mooney speaks in a distorted voice, briefly glancing toward the clown. At first, he seems to mention Debbie; I honestly can’t make out the line myself. Then he says far more clearly, “Don’t worry, Dave, all we wanna do is kill ya.” Then the clown withdraws a bloody hand from the back of his neck and advances, ignoring several hits from Dave’s revolver, right up to the movie’s biggest twist.

Of all the things one could say about this movie, the one thing that sums it up is that it could only have been made in the 1980s. It is all the more noteworthy that it came so late in the decade that it almost overshot the emergence of CGI with 1989’s The Abyss. Even more that Critters, it marks both a high point and swan song for practical creature effects. Fortunately, this is one movie that has been appreciated far more in recent times than it ever was on its own. It may not be as “great” as some make it out to be, but it is creative and above all fun, and that’s a fitting enough epitaph for an era.