Space 1979: The one that was an ad for a video game that never existed 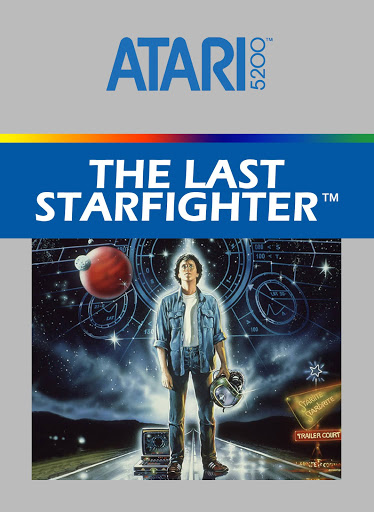 I have mentioned in previous reviews that a lot of my exposure to movies was through movies aired on TV. Another major vector was my older brother’s comic book collection. He had (and as far as I know still has) a very sizable comic book collection, mainly a collection of well over 100 issues of Iron Man, every one a time capsule of self-dating advertisements. There were plenty of movies, toys and games I first heard of because of old comic books, I’m sure including quite a few I’ve never heard of since. This review is one time the two intersected, a movie I saw advertised in the old comics and actually had a chance to see on TV instead of hunting it down decades later. It was the most 80s of 80s movies, one I would much later learn to be the tip of the iceberg of a multimedia franchise that never was. This is the story of The Last Starfighter.

Our tale begins with a young man named Alex living in a trailer park, where the only amusement available is a video game on the porch of what seems to be a restaurant, with graphics at least as good as a Playstation 1. The rest of the trailerites are hard up enough to gather in excitement when he breaks the high score. While he is brooding later that night, a mysterious stranger arrives who identifies himself as the creator of the game and offers him an unspecified opportunity. The protagonist goes for a ride to a destination that turns out to be a real starfighter base, with ships whose controls were simulated in the game. He becomes reluctant when he discovers that the base is in the path of an invading armada, but after the villains follow him back to Earth, he returns to the fight. When he arrives, he discovers that the base has been ravaged by a sneak attack, leaving only a single experimental fighter and a crusty alien navigator for a desperate raid against the approaching fleet.

The Last Starfighter was one of the last of a wave of space opera/ science fantasy films in the wake of Star Wars. It had a large budget and a high-profile cast that included Richard Preston of The Music Man as the recruiter Centauri and Daniel O’Herlihy as the hero’s copilot Grig. Lance Guest had an effective double role as Alex and a robot assigned to replace him, and Catherine Mary Stewart appeared as his girlfriend. The effects included space ship sequences created with (then) advanced CGI. It was famously intended to be released simultaneously with a tie-in arcade game from Atari, responsible for the semi-3D Star Wars arcade game and the less fortunate E.T. and Krull tie-in games, but the legendary game maker backed out before the game was developed. The movie made at least $21 million against a $14M budget. At least one planned Atari 2600 game saw release under an alternate title, while others have been unearthed or created by fans. A tie-in game was finally released for NES at the very late date of 1990, reportedly a modified version of an originally unrelated PC game.

As with a number of movies featured here, I first saw this movie on TV in the early 1990s. It was good fun at the time, but didn’t make a big impression at the time. What fascinates me in hindsight is that this is a movie that should have aged like anchovy pizza without refrigeration. To begin with, the intended cross-platform marketing was as crass as the most notorious Eighties cartoon/ toy commercial; if successful, it would have made the movie more “meta” than the Deadpool franchise. The ambitious CGI are painfully archaic, while still being far too good to pass as a genuine 1980s video game. As a bonus, its release date was exceptionally disastrous, right after the infamous video game crash of 1983 and a year before Kenner gave up on the original Star Wars figure line. While nobody seems to have connected Atari’s withdrawal from the project to the company’s direct misfortunes with the ET game, I certainly will.

Yet, the movie works, and for once I’m not the voice in the wilderness when I say it; this is another of the few movies I got requests for before deciding to include it. (And thank the Logos, it’s not Space Mutiny!) The acting and dialogue (especially from Preston and O’Herlihy) is among the best of any vintage genre film.  The practical effects are likewise top-notch, supplying very convincing aliens as well as the bonkers spacecar rig driven by Preston. The stone-age CGI actually succeeds in blurring the line between the gameplay of the opening scenes and the posited “real” world of the space war, while the story gives a measure of logic to the obvious video game setup. The design of the Gunstar (from Alien production designer and Dark Star alumnus Ron Cobb) even makes a fair amount of sense, with an almost Art Deco sense of smoothness and speed. Over it all is a sense of sincerity that ought to be almost painful, especially given the commercialism surrounding the production. Once again, it really works, with plenty of help from the soundtrack.

As always, what really matters for me is the world-building. The rival factions of the Star League, the opposing Ko Dan and the petulant renegade Xur are mostly white noise, but still convey depth and hints of moral ambiguity, particularly from a pair of alien commanders who clearly despise Xur as much as the good guys do. Centauri and Grig are the true soul of the resistance, idealistic yet clearly cunning. Then there is a whole arc of the android replacement left on Earth, which is what I remembered most strongly from my original viewing. I could easily have chosen a number of the duplicate’s scenes as my “one scene”, but the story is strong enough that no one moment stands out in isolation.

What I am going with this time is an action scene, which I haven’t done that often. Despite the video game homage, the movie puts most of its action in one climactic battle. After attacking the villain’s command ship, the Gunstar is swarmed by opposing fighters. The fighters prove uncoordinated but clearly effective, destroying a number of their own with friendly fire in the process of damaging the Gunstar. Grig announces that their super weapon, the Death Blossom, is available but still theoretical. Alex promptly responds, “Theoretically, we should already be dead!” The weapon works as advertised, leaving only the returning command ship against the crippled starfighter. It all ends with another moment I remembered all the way from back when, as the alien commanders exchange two immortal lines of dialogue before the final impact.

In closing, I offer an explanation for my classification. I developed the term “runnerup” for supposed “ripoffs” of Star Wars and other major movies that were really developed in parallel with better known films, like The Black Hole and Flash Gordon. This movie is clearly not in that category. What it is is an “imitation” that recognized the best qualities of the original product and actually made the effort to reproduce them. With better timing and better luck, it truly could have been another Star Wars, franchise and all. What we have instead is a very good movie that never got weighed down by its own success. As always, being a runnerup isn’t bad.

For links, the image credit goes to LaunchBox Games Database, which includes a decent overview of what is known of the Atari 2600 game. Den of Geek provides a deeper account of the various video game projects. As usual, see the Introduction for an overview of the feature, classifications and ratings.