Space 1979: The one where South Africa stole Battlestar Galactica and made it terrible 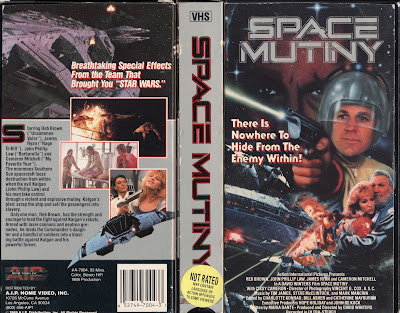 When I first thought of this feature, I tried requesting suggestions/ requests from online forums where I correspond regarding my various writings. What was immediately striking is that most of the titles that were suggested were ones I had already either planned to include or decided to be unsuitable. But there was one that came up that I had never heard of and would never have considered at face value. Still, I took just enough interest to keep looking into it. The result was this review, also the first I have written separately from my blog. If those who suggested it are reading this, you literally asked for this.

Our story begins with the introduction of a “generation ship” on its way to colonize distant planets. We then dive in to a battle with “pirates” whose origin is never resolved, and if it seems like the effects are way too good for this movie, it’s because the spaceship sequences are all taken directly from the Battlestar Galactica TV series. All too soon, we return to the ship interior, which appears to consist entirely of 1950s industrial machinery, 1980s computer equipment, 1970s outfits and many, many guardrails. We learn that the trusted engineer and a renegade security officer have teamed up to take control of the ship and sell the colonists as slaves to the pirates (who continue to try to blow the ship out of space). The conspirators kill off several crew members who discover their plans with no apparent difficulty, but are unable to stop a heroic fighter pilot and the captain’s daughter from ferreting out their plans. Instead, they take the damsel hostage and demand the captain’s surrender, leaving it to the pilot to lead a daring rescue.

This production was filmed in South Africa in the last days of apartheid, by a company called Action International Pictures. The credits show the name simply as A.I.P., because apparently this crew envied the company that brought us Futureworld. They brought on stalwarts John Philip Law and James Ryan as the mutineers and the original Captain America Reb Brown as the heroic (and horrendously misogynistic) pilot. The standout is Cisse Cameron (Brown’s real-life spouse), who at age 34 boasts a figure that looks 24 and hair that looks 44. Anecdotal accounts report that it received a US release in 1988, though it received no MPAA rating. It gained lasting notoriety after being featured on Mystery Science Theater in 1997.

For my personal experience, almost everything I learned about this movie told me it was not the kind of movie I wanted to cover. To start with, this movie was never going to be “that bad” by the standards of this feature. (Even Inseminoid isn’t the worst thing I could have picked.) My stated further preference was for films made no later than 1985, and 1988 is late indeed. I also had largely ruled out foreign films, especially in the absence of a US theatrical release. On that front, I remain especially suspicious of the lack of a rating. If it comes to that, I’m not a big fan of MST3K. It never quite clicked with me, and the movies that worked for the show usually don’t resonate with my interests.

What made me move forward was the bizarre production design. I’ve already covered “Seventies” movies that came out in the 1980s, but the costumes in this movie are more ‘70’s than goddam Zardoz in Nineteen Eighty goddam Eight. The infamous use of existing industrial space gives an extra surreal feel. To me, this is the one thing that could have worked, except that the very solid catwalks repeatedly force unnatural choices in the action and camera work. In one particular shot I zeroed in on in both the original and MST3K cuts, the villains are scrambling up one set of stairs and straight back down like it was an MC Escher painting. Naturally, there are bonus points for cringey sexual overtones. Even back in the 1950s, it was one thing to treat women as menial labor or therapeutic stress relief, and another to talk about controlling them like machinery.

I could get a lot more wound up over the treatment of the “generation ship”, or lack thereof. It can be allowed that there are few examples of “good” movies that try to handle the concept: WALL-E, of all things, in a broader sense the “bunker states” of the post-apocalyptic subgenre like A Boy And His Dog or City of Ember. But the only nod to the scenario in this film is a dressed-up park/ garden space that the hero and damsel seem to use as a personal playground. It must be further emphasized that this is a case where development is in order just to explain the mutineers’ motives. Is the ship overcrowded, or subject to population control measures that some are resisting? Are there class divisions that make the security forces fear the general population? Have the colonists become afraid of living in a planetary ecology, or elevated it into fanatical animist nature worship? The idea that this plants in my mind is to make this a 1980s sitcom, then make it the worst one ever made, intentionally or otherwise. A concept like that could have been shot as an “adult” film for $1500 in a used VW Bus, and it would be a hundred times more interesting than this.

Now for the “one scene”, the one genuinely interesting moment is when the hero and heroine corner a lesser minion in a room where creepy mannequins hang from the ceiling. (Given the approach of this production, it is conceivable that they were already there when the film crew moved in.) These are explained as crew detained in suspended animation by the security force. The minion further reveals that the villains are torturing those they detain and ejecting them into space if they prove intractable or simply cease to be useful, all without the knowledge of the ship’s commanders. The reactions of our “heroes”, especially the damsel, are on par with discovering that they were shortchanged at the supermarket. Then they not only do nothing for the prisoners, but never mention them again.

This is where context becomes painfully relevant. Nobody would have expected a low-budget film to challenge the powers that be of a segregationist regime. It’s understandable that the filmmakers did not push their luck casting persons of color, either from Africa or abroad, and probably just as well that they did not dig for a half-baked racial “message”. But it’s quite another matter to portray exactly the kind of abuse and “disappearance” that was regularly occurring, and credulously imply that the officials and authorities could be neither involved nor aware outside of willful ignorance,  and then barely allow the cast and audience to register an emotional reaction. I have been saying all along that a movie can be “bad” on moral terms alone; this is assuredly one of the very worst, and that part should never be funny.

For links, I credit Super Cult Show for the image, clearly vintage VHS art, and also recommend an overview/ review by Psycho Drive In. As always, you can see my Introduction for an overview of the feature, classification and rating system.