Space 1979: The one where a mind-controlling alien runs for president 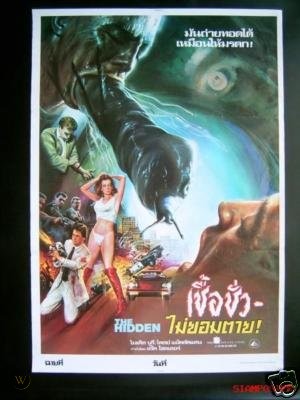 I have frequently mentioned that my idea for this feature was to cover movies from the mid-1970s through 1985. On reflection, I think this has a lot to do with my own experiences. As an “eighties” kid who didn’t even have a TV until I was about 9, I think I literally saw more movies from the 1970s than the 1980s, and the period from about 1987 to 1992 stayed in my blind spot until well into high school. Of course, this meant I missed out on plenty of great sci fi movies the first time around. While there are many films I would love to review sooner or later, they aren’t going to be many of them here. This review is covering one of the ones I did want to cover from the beginning, a plucky little nihilistic action film called The Hidden.

Our story begins with a chase between the police and a bank robber who seems more interested in reckless driving and casual homicide than the actual loot. After a shootout leave the criminal in a coma, a protagonist police officer reveals that he was a law abiding citizen until going on a killing spree that also including a heist at a candy store. Meanwhile, the dying criminal rises from his bed and graphically expels an enormous slug-like creature into the mouth of another patient. The parasite continues the mayhem as it hops from host to host, while the hero gradually realizes its nature, with the aid of a new partner who is not what he seems.

The Hidden was released by New Line Cinema in 1987, and earned a little under $10 million. Its cast was led by Michael Nouri of Flashdance and Kyle MacLachlan of TV’s Twin Peaks as the extraterrestrial lawman who knows the truth about the goings-on. The villain is necessarily represented by a number of actors including Claudia Christian of Babylon 5 (also a dog). It was viewed as an imitation of Terminator, with justification. However, it was also part of a wave of action/ sci fi crossovers that came out in1987, including Robocop, Predator and the “straight” actioner Lethal Weapon.

I can remember picking up The Hidden at a local video store around 1999. I wasn’t unduly impressed at the time, but I liked it well enough to buy it some time later as part of a set that also inexplicaby included the 1990s version of Island of Dr. Moreau. (Don’t know if I’ll get to that one, but it’s good, dammit!) Watching it again, I found a lot more to appreciate, especially after “coming out” as an Asperger’s/ Autism Spectrum self-advocate. This is a movie that has good action (if anything subdued by 1980s standards) and good sci fi without losing site of character. Within fair allowances for budget and genre conventions, the characters are well-cast and well-developed. The hero cop is reasonably likeable, and the dueling aliens are delightful in their awkwardness, each in his/ its unique way.

Inevitably, the movie hinges on whether the viewer will accept the villainous alien’s hosts as a single character. It’s a very difficult challenge on consideration, yet nobody has criticized the movie in this respect. The creature may not be a complex character and the actors might not be great, yet there is certainly a unifying sense of drive and deeper detachment, with recurring phrases and mannerisms placed in lightly. At times, it’s disappointing not to see more of a particular host, especially an exotic dancer played by Christian. What I find most interesting is that, while the plot ultimately turns on the creature developing a plan to grab for power, most of the time, it just seems to be going more native than the natives. It’s not overthinking things to take this as a satire of vintage consumerism, all too relevant in more recent years. On further reflection, I find parallels to Heath Ledger’s Joker. This guy strikes me as someone who really doesn’t know what to do with a plan. If it came to that, I can believe he might not only rob the bank and burn the money but also swipe the pens chained to the counter.

For the “one scene”, the best of the villain’s scenes is when the second host goes to a luxury sports car dealer to acquire a vehicle. He could presumably grab an unoccupied vehicle, or retrieve enough cash to pay for one. Instead he fixates on a specific vehicle returning from a test drive and declares, “I want this car.” In an extra bit of awkward comedy, the dealer doesn’t really entertain a legitimate transaction either, but orders the weirdo thrown off the lot. While he  and the customer celebrate with illicit substances, the villain predictably disposes of his hired muscle but returns to retrieve the keys. In the most priceless of many moments, he says “Thanks” and then more menacingly, “Bye”, before the clearly predetermined outcome.

This is where the story begs for just a little more world-buildng. On the whole, the villain can be accepted as equivalent to a conquistador stranded among the natives, with no plan or motive beyond glory and gold.  But if an alien civilization was in contact with Earth, there ought to be others who at least have more sophisticated methods and tastes. And what might they be after in 1980s Terra? One might collect Norman Rockwell plates and other semi-valuable native art. Another might be buying up Star Wars figures off the clearance racks. And then there might be some grabbing up things that a rational human would literally throw away: the Styrofoam sandwich boxes, the Bubble Tape dispensers, the Tic Tac boxes, etc. It's as comical yet disturbing as anything in the movie, and undoubtedly well beyond what the film makers would have thought of on their own. But it’s the exactly the kind of “what if’ questions and answers that well-made sci fi is good for, and that's why movies like this remain fascinating.

As usual, you can see the feature Introduction for details of the rating system and classifications.