Space 1979: The one where the creator of Alien is defeated by a beach ball 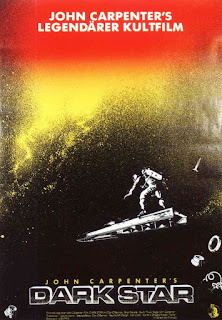 Of the categories of films I have set up for this series, one of the first to cross my mind and last to appear was the “anachronistic” movie, which I put more formally as an Anachronistic Outlier. As outlined previously, this can include both films that are dated even for their own time and films that were unaccountably forward-thinking. Something else I recognized very quickly is that many of the most noteworthy and effective examples of the latter were made and presented as comedy and satire, a field I otherwise intended to treat very sparingly. The best explanation I can see for this odd pattern is that comedies are more willing to openly defy or subvert genre conventions. They are also comparatively likely to be made either by newcomers to film or creators whose previous experience and talents lie elsewhere. With this review, I am finally up to a truly iconic example, a micro-budget project that started the careers of a leading director and an influential screenwriter and still feels more forward-thinking than any number of high-profile titles.

Our story begins with the introduction of the titular ship Dark Star and the the misfits who pilot it. It is quickly established that they are not explorers but an interstellar wrecking crew assigned to destroy planets that might fall into their stars and cause a premature supernova. When the search for intelligent life is mentioned, the gruffest of the lot remarks, “Give me something I can blow up.” As their misadventures continue, we meet a feminine ship’s computer, a set intelligent and talkative planetkiller bomb, a mischievous alien pet, and the ship’s semi-diseased captain. The crew prove lackadaisical as the ship is subject to deterioration and occasional explosions (one of which destroys their toilet paper). At one point, faced with a glitch that prematurely initiates a bomb launch, a crewman simply remarks, “We’ll figure out what it is when it goes bad.” The dysfunctions and malfunctions quickly, culminating in a race to disarm a disgruntled bomb that refuses to abort its countdown. Alas, the plans of the crew go awry and the ship is blown up, leaving the survivors to talk for the remaining minutes before their own demise.

Dark Star is one film whose history is already reasonably known. John Carpenter and the late Dan O’Bannon conceived the film as a student project, with Carpenter as director and Dan O’Bannon playing crewman Pinback. A few years later, they put together enough money to release a longer version of the film in theaters. By their own accounts, those who saw its original release were confused more often than amused. However, it did receive favorable attention from critics and the emerging ranks of science-fiction film scholars, including Philip Strick, whose 1976 book Science Fiction Films contains a favorable synopsis. In the following years, Carpenter became a renowned director of sci fi and horror films like Halloween and The Thing (the latter is in many ways the most like Dark Star), while O’Bannon won fame as the author/ creator of Alien based on an episode within Dark Star. Meanwhile, Dark Star lived on in independent theaters, VHS and eventually DVD, Blu Ray and streaming, with a growing influence that included the show Red Dwarf.

This is another film that I have very specific recollections of. When I was in 8th or 9th grade, I read about it in Strick’s book, and rented it from Blockbuster; to my further recollection, I checked it out along with Westworld and watched them both in one night home alone. Dark Star in particular blew my impressionable mind. It was weird, wacky and dark all at once. It has good dialogue between characters who were flawed but still likeable. Its synthesizer soundtrack was self-dating but no less effective for it, with a theme song balanced between intentional cheesiness and genuine melancholy. It even had generally good effects that look well ahead of their time, never mind the budget, apart from an alien (which I will get to momentarily) so obviously and egregiously fake as to pass over into psychedelic creativity.

However, I have grown more cautious in my admiration as an adult, which I suppose is a major reason I considered it for inclusion here. There are a few movies I have considered for this feature simply because they are no longer as well-known as they once were, but Dark Star has in many ways suffered the opposite problem. I have seen it become far more well known (especially through Red Dwarf’s influence), and in the process it has attracted far more criticism. “Cult” movies are polarizing by definition, and review pages for this one are invariably divided between fans and very vocal critics who usually have fair enough points. My final judgment has been that this movie requires the right mood as well as the right tastes, to the point that I wrote much of this review before viewing it again.

For the “one scene”, there is one segment that a viewer will love if you like the movie at all, and that is the faceoff between Pinback and the alien the crew keeps as a pet. It’s introduced when Pinback is told it’s his turn to take care of the creature, and further reminded that it was his idea to have it onboard. He grudgingly makes his way to the chamber where the alien is kept. After this build up, we are introduced to a creature very clearly made from a large fabric beachball. Naturally, the alien quickly outwits its human keeper and escapes. The misadventure that follows is too long and too nuanced for a summary to do it justice. What’s noteworthy is that Dan O’Bannon follows through in the high point of his only acting role with a silent comedian’s command of timing, expression and body language, making it altogether regrettable that we never saw more of him in front of the camera. His performance is fully matched by the operators of the alien. Despite its deliberately ridiculous design, it has a quite realistic set of paws that allow a sophisticated range of motion and mannerisms. I have always been riveted by a moment when it clicks its claws as if deliberating what to do. I will never be convinced that it is coincidence that one of the velociraptors in Jurassic Park does exactly the same thing during the famous kitchen scene.

In closing, the best I can suggest is that new and old viewers go in with an open mind, and give it an extra viewing. This is a movie where the humor and growing horror is doled out in small increments (again very much like The Thing). If you go in expecting a “great” movie, or even “laugh a minute” comedy, the odds are high you will be disappointed. If you go in with the spirit of a kid looking for a cool movie, then you just might find more than you hoping for.

For links, the image credit goes to TV Tropes, which as usual gives a good account of the film. Also see the series Introduction for an overview of the classifications and rating system.