Space 1979: The one where stop-motion dinosaurs face off with a slasher movie cast 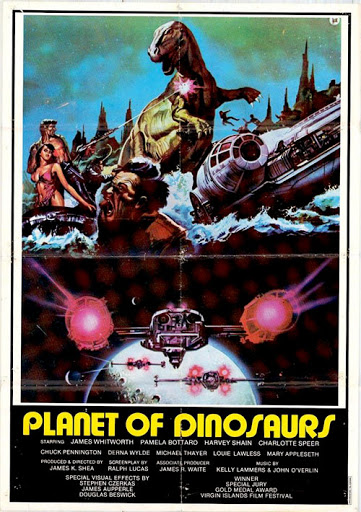 When it comes to reviewing movies, my first love is stop-motion dinosaur movies. In the far-off days, the technology behind Gumby and Pokey was big-budget special effects for classic movies like King Kong and Jason and the Argonauts. Even in those days, there was only a small cadre of animators who could do it well, led by Ray Harryhausen and his mentor Willis O’Brien. I have had to point out all along that the movies that featured their fine work almost always had relatively good production values and overall quality for their era. The cost, time, and sheer obsessive self-discipline of positioning miniatures frame by frame by frame was normally out of reach of the worst low-budget fair. (As a further consequence, there was a virtual genre of movies that cannibalized the original One Million BC for “dinosaur” footage.) The conspicuous exception is the present movie, which I regarded for some time as the worst I had ever seen.

Our story begins (after the absolutely bonkers credits) with a shot of a starship in space. It’s pretty good, so of course, it’s revealed the ship is about to blow up. A small party, consisting of the captain Lee, engineer Jim, 5 crewmates and exactly two passengers included their employer, escapes on a sort of shuttle. They lose that vessel, their communications equipment and one of the crew ditching in a lake. The castaways soon realize that they are on an Earthlike planet inhabited by dinosaurian creatures that are absolutely immune to gunfire. The band is lunched one by one, while Lee and Jim quarrel for the right to command the dwindling group. When they discover their efforts to escape the dinos have brought them into the territory of the biggest predator of all, Jim calls on the group to join together and kill the creature.

Planet of Dinosaurs was officially released in 1977, the same year as Star Wars as well as the Harryhausen production Sinbad and the Eye of the Tiger. The lead roles of Lee and Jim were given to B-movie actors Louie Lawless and James Whitworth; the only other cast member to have a significant  career was Michael Lee, a briefly seen child actor who went on to a series of ads for Dunkin Donuts. The real talent went into the stop-motion effects, under lead animator Stephen Czerkas with credited assistance from the senior craftsmen Doug Beswick and Jim Danforth. Much of what can be known of the movie’s production and release comes from Czerkas, whom I personally encountered in the middling 2000s as the revered elder in a discussion forum on stop-motion animation. Of most significance, the animator specifically recounted attending public screenings of the film, contradicting certain reports that it did not receive a theatrical release.

Moving on to my own experiences with this film, this was one of the first stop-motion dinosaur films I acquired my own copy of. After learning far more about the genre, my foremost impression is that this was the last and most disastrously mistimed of the breed. It was clearly made as a well-intentioned homage to earlier films, especially by O’Brien and Harryhausen. The problem was that Harryhausen was already at work on what would be his final film, Clash of the Titans, while the last to feature dinosaurs was Valley of Gwangi from 1969. The outdated nature of the movie was simultaneously exacerbated and obscured by the many posters and video covers that tried to link it with Star Wars. As with the more egregious case of Laserblast, this simply made it look like a ripoff of something it really had almost nothing in common with.

Anything good to be said about this movie will come from the dino effects, and I must depart from my usually format to say enough about them. Some of the best to be featured are smaller dinos that appear incidentally, notably a pair of dueling ornithimimids, which adds to an unusually well-developed picture of a functioning ecosystem. There are nice further touches in sound effects, including an eerie shriek far more effective than T. rex roar in Jurassic Park, and a comical potato-chip crunch when a lesser predator gets chomped by the big one. But there are also moments that don’t ring true, like a bow-legged sauropod, a stegosaur with plates that bend, and a heavily armored ankylosaur that goes down from a blow of a rock like a cow in a slaughterhouse. The one that has always stood out to me is an otherwise commendable seen where the crew’s jerk boss raids a dinosaur nest. Of course, mama shows up, a ceratopsian, noteworthy as the only dino to attack with a clear provocation. When it charges, it moves with a very strange gait that I find akin to a windup toy at triple speed, marring one of the movie’s most effective (and quite graphic) attack sequences.

On the other hand, the weaknesses are all too freely supplied by the human cast. To begin with, the quality of the acting is mediocre at best, laughably bad on average and painful at its lowest points, but that alone doesn’t account for how stupid almost all of them are. The decision-making of the crew is on a level not normally seen outside of teens in a slasher movie repeatedly endangering not only their own lives but vital gear everyone else needs to survive. My favorite is a guy who tries to fight the big bad dino while standing next to a carcass specifically left out as bait for it. In many ways, the biggest idiot is Jim. He makes me think of Mr. Scott going native among the Klingons; on consideration, he’s even more like David from Shaun of the Dead, with far fewer redeeming qualities. He talks tough and increasingly demeans Lee and other members of the crew, but he is absolutely no smarter or more qualified to lead than anyone else. When he does finally get a chance to try his own plan, it’s pure luck he or anyone else survives, which doesn’t stop the story from presenting him as the one in the right.

I also have to give a rant about those laser guns. Long before and after this movie, it was a cliché for dinosaurs to be virtually invulnerable to guns. I have been annoyed enough with this to take it head on in my own fiction, but this movie is an egregious example. What’s uniquely irritating is that the movie had a ready rationale for inadequate weaponry: Actual astronauts have sometimes been issued rifles and shotguns for hunting small game in the event of a crash in a wilderness area, but nobody would figure on facing something as big as a rhino or elephant (though a few 12-gauge slugs would do the job well enough). Instead, the crew are given ray guns that are advertised to “kill almost anything” yet never do more than vaguely annoy the creatures. As a bonus, while “real” energy weapons have the specific advantage of not requiring openings for the muzzle or magazine, these are so oversensitive that Jim declares one ruined after being dropped in the water for a few moments (not that we’re obliged to take his word for it). The core problem is that we have no frame of reference to be impressed by either the monsters or the guns. We haven’t been told how powerful the weapons are compared to contemporary firearms, nor do we seen them slay any lesser beasts. Without that kind of proportion, it appears either that the beasts are armored like Abrams tanks (except for the ankylosaur that’s actually armored) or that the weapons are about as effective as a laser pointer.

For the “one scene”, however, I have to go with the opening scene that set this up. As mentioned, the briefly featured spaceship looks quite good. The scene proceeds at a good clip, without dwelling on the cause of a reactor meltdown that destroys the ship. (From what we see later, the jerk boss might have diverted the coolant to keep his wine bar chilled.) We then see the launch of an escape craft that actually looks quite functional, with an extra shot from the rear as it descends toward the planet. Jim announces that their power reserves (or at any rate reserves of something) are low, while copilot Nyla announces they must make a water landing to stay intact. Alas, when they splash down, it quickly sinks, forcing the crew to bail out in such a hurry they forget most of the equipment that would do them any good.

But this is where I say, not so fast. A functioning space craft that can hold in air in the vacuum of space can certainly keep water out, and it’s the one thing a search-and-rescue party should be able to find, especially in a shallow body of water that survivors could be expected to seek out. If the hull is leaking due to damage, as Jim announces, there could still be an air lock or cargo bay that one or two could take shelter in. Then there would surely be at least one space suit aboard, and once again, if it works in space, it will work in water. Even if the rest of the crew had to bail out, one guy could stay behind in the ship for anywhere from a few hours to several weeks. (Even by the standards of this crew, most of the men are clearly more expendable than any of the women.) Then if he got to the end of his air supply, all he would have to do is grab any equipment with salvage value and walk to shore.

Needless to say, this is the kind of overanalysis that is only possible with frequently repeated viewings. By any standard, this movie is “so bad it’s good” in the best kind of way. I personally have had way too much fun to give this movie the lowest rating, yet even productions of this caliber have done a far better job with character development, worldbuilding, and internal logic (see Dark Star). If there had been even a little more work put into these areas, I could easily have raised the rating to 3, 4 or even 5. As it is, go in for a good laugh, and you certainly won’t be disappointed.

For links, the image credit goes to Space 1970 (again). My favorite reviews are still from Million Monkey Theater and Stomp Tokyo. For more on the feature, the rating scale and classifications, see the Introduction.