Space 1979: The one with swords, lasers and a rotoscoped King Kong 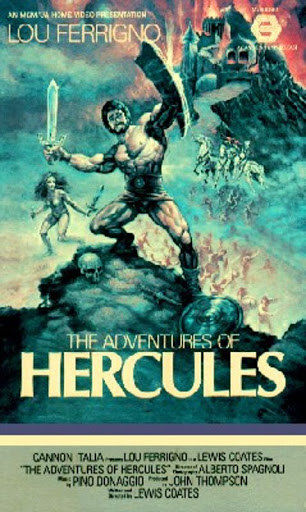 Title: Adventures of Hercules aka Hercules 2

If there is one thing where I tend to break with the crowd in my tastes, it is in sequels. These are normally the most successful yet reviled of movies, for good reason. Studios pay to make sequels with the expectation that they will earn a lot of money without the need for new ideas, controversy, or effort in general, and relatively few filmmakers are bold enough to break with the plan, especially when there are already two or more franchise entries under the belt. The unfortunate flipside is that sequels which genuinely build on the existing material are the ones that are more likely to fail, with audiences, critics and fans alike. I seem to be the one who can look at a sequel for what it did (or tried to do) differently, which is a major reason I introduced the Weird Sequel category to this feature. This time, the specimen under consideration is the weird sequel to one of the weirdest movies on the early to mid-1980s landscape.

This time, our story starts with a cosmic montage of the creation of the universe, followed by a longer opening credits montage of the highlights of the previous movie. By the time that’s done, we then learn that several of the Greek gods have rebelled against Zeus and stolen his thunderbolts. The king of the gods sends the hero Hercules back to Earth to retrieve his thunderbolts, which have been transformed into a range of monsters and malign demigods, including Anteus, a being of energy that receives sacrifices from fearful mortals. Two plucky women, Urania and Glaucia, join Hercules to avoid being sacrificed, while the rebellious gods resurrect Hercules’ old enemy King Minos, despite his previous avowed goal to overthrow the gods of Olympus with science. By the time Hercules has gathered most of the lightning bolts, Minos has wiped out a good part of the pantheon with the acquired powers of Chaos. The two rivals are transformed to meet on the cosmic plane, and the two women discover the secret of their true selves.

The Adventures of Hercules was a sequel to the 1983 Italian-American production Hercules. Bothe movies were written and directed by the indefatigable Luigi Cozzi (the offender most responsible for Star Crash), and starred Lou Ferrigno as Hercules and William Berger as the villain King Minos. Where the original had a cast of high-profile but subordinate actresses (including Battle Beyond The Stars’ Sybil Danning), the sequel placed exploitation starlet Sonia Viviani and semi-respectable Milly Carlucci as the comparatively self-reliant heroines. It was released in Italy and then the US in 1985. By all accounts, it was poorly received compared to the first movie, though no tale tells how much it earned or cost.

This installment is the most difficult decision I have made about which movies to cover. I very seriously considered reviewing both this and the original. In the end, I finally stuck with the precedent of one entry per “franchise”, and as with Westworld/ Futureworld, the sequel was of greater interest. While the first movie was absolutely bonkers, it really never needed defending; nobody then or since suggested it was anything but the original and bizarre experiment it really was. (If anything, I should have given it a mention when I reviewed Krull.) By comparison, the sequel is in a number of ways more conventional, but also better anticipated the course of its genre, to the point that it would be easy to be lulled into accepting it as part of trends that were really still years away. Like several of the most curious films to come up in this feature, it feels like it “should” have been made either a decade earlier or a decade later, which is always enough for me to give it further attention.

What obviously stands out with this movie is the two heroines, who give many of the adventures the feel of an episode of Xena (first aired in 1995!). Of at least equal consequence is the diversity of the villains, which frequently draw in influences from science fiction and even more incongruously from Medieval fairylore. We have a stop-motion gorgon, an animated version of Anteus that looks like living lightning, an ogre-like armored giant that collects souls, and a tribe of almost zombie-like slime people. It’s of further note (in contrast to the original) that few if any of the battles are too easy for Hercules, which in turn makes it all the more impressive that his female companions are frequently able to fend for themselves. The effects continue the first movie’s mashup of science fiction and fantasy, complete with laser beams. This culminates in the finale, when the animated versions of Hercules and Minos transform into a series of improbable forms including King Kong (!!!). The opening sequence portraying the primal interplay of creation and chaos is equally hallucinogenic, augmented with what I am absolutely sure is CGI.

The story hinges on its characters, as it should, but unfortunately, this is where it struggles. Hercules as portrayed by Ferrigno is just as unquestioningly virtuous and possibly even dumber than he was in the first movie. Minos as played by Berger again runs rings around him, yet suffers more in the transition. It is especially jarring to hear him give his usual speeches about the virtues of science and reason while calling on the powers of primal chaos, a union about as predictably ill-fated as his alliance with the rebellious gods. The Olympians themselves are the most well-realized characters, none especially well-developed but all conveying the same petty malice to be seen in the original myths, and this time Zeus actually has what looks to be a real beard. Then there are the heroines, already noted as the most innovative element of the movie. It is here that the movie clearly falls short of its potential, reducing the pair to little more than pawns in the final act, though it manages to wring out a few poignant twists.

For the “one scene”, I had to go with the stop motion sequence, and that’s saying something with the finale in play. Where the first movie had several explicitly mechanical monsters realized with stop motion, the sequel offers only the gorgon, first seen as a very elegant noblewoman in a hall of statues. As the lady grows more menacing, Hercules orders the heroines to run for an exit, without offering much confidence that he will follow. As the villainess’s laughter draws nearer, he actually retreats, for just about the only time in either movie. When the gorgon’s form is revealed, it could easily be regarded as an anticlimax. The stop motion armature is on a “claymation” level, and the animation does not improve matters. However, the design is freakishly original, combining the familiar form of the gorgon with a scorpion for no apparent reason. When Hercules strikes, we finally see the damn thing in its entirety, just in time to witness its death throes every bit as hideous as the creature itself.

Even more than Krull, the Ferrigno Hercules movies were an oddity that could only heave come about in the early to mid-1980s. This time, at least, things got far enough for more than one entry, and one that set out in a new direction to boot. While it would be far too optimistic to suppose that either movie had much influence on later and more successful films, they at least pointed to path ahead.  Let’s further celebrate the Italian cinematic-industrial complex (already overdue for some further representation), the only group of people who could take throwing a bear into orbit and make it really weird.

No links this time because Blogger and Windows literally won't let me. More to come!