Space 1979: The one that got released as the unauthorized sequel to the sequel of Night of the Living Dead 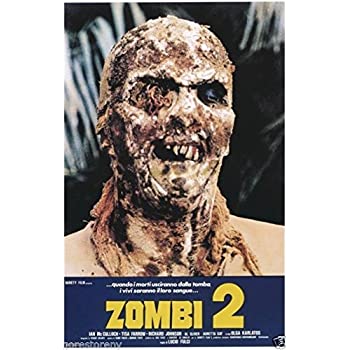 I said in my review to Night of the Creeps that I have so far avoided zombie movies. Having said that, I’m now back with another one. The thing about me and zombie movies is that I have been doing this for enough time that there isn’t a lot out there I’m still looking for. Most of the ones I really want have been in my collection for years. The rest are the ones that I either can’t get or already watched and let go, which tends to make things awkward when friends have tried to gift me a zombie movie. This review is of one of the movies in my “dropped” file, and also just happens to be one of the most notorious and brazen Italian ripoffs of all time.

Our story begins with a sailboat coasting into New York harbor. The police board the boat and meet an impressively bloated and hideous zombie. While the authorities apparently do nothing, an intrepid reporter traces the boat to an uncharted island where her father disappeared. There, they find a superstitious population living in fear of a horde of undead rising from their graves. The closest thing to a responding authority is a sketchy medical man whose wife is among the first victims. While the doctor vaguely recounts his search for a rational explanation, the reporter and a small party of companions try to outrun a growing number of revenants, including their own reanimated friends and family. As night falls, the surviving protagonists hole up with the doctor in a church turned field hospital. They manage to wipe out most of the besieging horde but destroy the building in the process. As the survivors go back to sea, they hear a broadcast from the mainland, revealing that the city is already infested with the undead.

Zombie was one of the first of a wave of “spaghetti zombie” offerings from Italy, which in turn drew on an earlier tradition of graphic giallo genre films. It was famously made and released in Italy as Zombi 2, with “Zombie 1” being an alternate title for George Romero’s Dawn of the Dead, a move which Italian law allowed without permission from the makers of the original film. Accounts differ at what point in the production the decision to present it as a “sequel” occurred; director Lucio Fulci is on record as denying any knowledge of it, while screenwriter Dardano Sarcchetti maintained that a draft of the script existed before Dawn of the Dead was released. It had a successful North American run under its sequel-free title. Fulci followed it up with several loosely related films, including the “official” sequel Zombi 3 in 1988. More typical offerings from Fulci focused on supernatural themes over corporeal zombie action, notably 1981’s The Beyond. Predictably, a number of  other movies were represented as numbered sequels to Fulci’s original film in Italy and the US. It will suffice to note that Fulci was involved in none except Zombi 3.

My mixed feelings about this movie go back a long way. Fulci had a unique style that has never clicked with me, though Zombie actually avoids the most aggravating and flatly incomprehensible features of many of his works (especially The Beyond, which I just might get to). It does share with his other films an emphasis on incongruous visuals and disjointed narratives, egregiously an encounter between a submerged zombie and a shark, which certainly “work” but mostly on a hit-or-miss basis. The deeper problem is that it never works its way to a resolution or “point”. In those terms, Fulci effectively tries to be more post-modern than Romero. If Night of the Living Dead and Dawn of the Dead refused to give audiences conventional happy endings, Zombie does little more than start and then stop.

Then there are certainly plenty of particular problems, which I find noticeable with the setting. As noted, there is no sign of police, military forces or government. There is also no effort by the reporter or her companions (including a man who owns his own boat) to figure out which nation might have claim to the island before landing on it, which in real life would be an easy way to start a war. The glimpses of native life that follow are paper thin, in contrast to the rich if stereotyped visions of early Caribbean zombie movies like White Zombie and I Walked With A Zombie. Even the “real” belief in zombification gets little mention beyond the use of the word, which ironically was almost entirely avoided by Romero. Things get more curious as the undead begin rising from their graves (also specifically absent from the Romero movies), often and randomly enough to give the ominous impression that there are about as many people buried on the island as there are actually living on it. This particular detail could have been developed into a darker tale that might give deeper meaning to the goings-on, but like many things, nothing is said of it.

For the zombies themselves, the most interesting aspect by far is that the movie discards what scientific logic there was to the Romero-style zombie apocalypse. The dead seem to rise no matter how far past their expiration date they might be, and then usually whenever one the living is close by. Their appearance is egregiously rotten, another contrast to Romero, without giving the feel of greater realism, particularly considering how quickly decomposition is clearly shown to occur in the island’s climate. More problematically, they prove slow-moving even by old-school zombie standards, to the point that several victims have to stand and wait to be devoured. A curious further twist is that there are times when zombies seem simply to ignore the living, particularly a pack already occupied with the doctor’s wife. As seen with The Green Slime, this is in itself a very unsettling nuance of behavior, but again, it mostly seems to keep the creatures from attacking when it doesn’t suit the needs of the script.

For the one scene, I could pick several “favorites”, particularly the zombie-shark encounter, which is good enough (in fact rather too good) for another honorable mention. But the one that has always drawn my attention is the iconic closing scene, where the undead march along the Brooklyn Bridge. It’s an impressive and eerie sequence that extends through the credits, all the more so given that it is far too low-tech not to have been filmed on location. What always stood out to me is that throughout the scene, cars can be seen driving back and forth below, obviously because the film crew did not have the budget or authority to close the bridge. The equally obvious joke is that even the apocalypse wouldn’t slow down NYC traffic. Yet, it’s quite disconcerting to further consider how many motorists must have passed the very real, fully made-up extras without thinking it worth the trouble to slow down!

In closing, I will say that this is a movie I am glad exists, even if I don’t particularly like it. It was this movie as much as any other that established the zombie-apocalypse genre, and for that alone it’s worth more than the sum of its parts. It’s the kind of movie that’s better to have held and seen than to possess, and even with that said, I suppose the odds are I will buy it sooner or later if somebody doesn’t buy it for me first. So go ahead and look it up, whether you’ve seen it or not, because there’s never going to be one quite like it.

For links, I just have the Introduction, and while I'm at it the Futureworld review introducing the Weird Sequel category. More to come!