Space 1979: The one where alien eggs are shipped to New York in a coffee boat 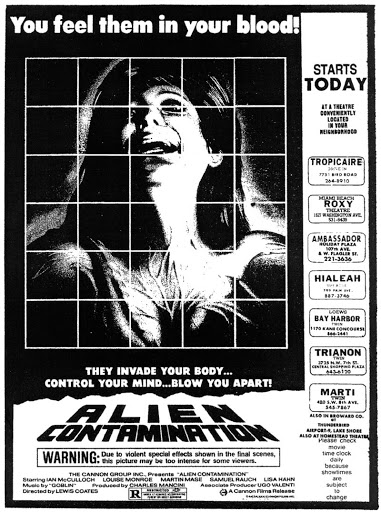 I have previously commented that the one thing I haven’t done as much as I expected to so far is Alien knockoffs, though I have already done a bit of catchup. In contrast, the one thing I have done more of than I expected is Italian movies, including a few (particularly Flash Gordon) where I didn’t comment on that angle. For the last few reviews, I have tried to go into more detail about what the Italian filmmaking scene was really like, and that brings us to another movie I originally planned to do much earlier. This is the Italian answer to Alien, and by reputation it’s the one thing nobody would have expected from the Italians: boring.

Out story begins with a ship adrift in the harbor of New York. A team boards the ship and discovers the gruesome bodies of the crew amid a hold full of strange objects that look more like oversized cucumbers than anything else. When one of the things bursts in a spray of fluids, the humans exposed explode for no obvious reason. A frantic search led by a battleaxe heroine reveals that the eggs (or whatever) are being shipped by an equally mysterious cartel through a supposed coffee company. In the process, the heroine reconnects with a disgraced astronaut who knows the secret of the origin of the eggs. After various intrigues, hijinks and returns from the dead, they find the headquarters of the cartel, led by none other than the astronaut’s former crewmate.

Alien Contamination was written and directed in 1980 by Luigi Cozzi, in between Starcrash and the first of the Lou Ferrigno Hercules movies. The production crew and cast overlapped with both Dawn of the Dead and Zombie/ Zombie 2, notably with Goblin performing the soundtrack and Ian McCulloch cast as the astronaut. Other cast included Canadian actress Louise Marleau as the heroine, German star Siegfried Rauch as the cartel leader, and Italian Marino Mase as a New York police officer. Cozzi not only acknowledged basing the film on Alien but admitted using the early title “Alien Arrives On Earth”, almost the same title used by the (apparently???) unrelated ripoff Alien 2. A good part of the budget went into a full-sized animatronic alien featured in the final scenes, which Cozzi reportedly intended to be stop-motion.

On reflection, I think a big part of why Italian films have figured so prominently in this feature without more comment is that by the early 1980s, Italian productions had reached the point of becoming “mainstream”. Spaghetti westerns like The Good, The Bad And The Ugly had become established “classics”, Italian and Italian-American horror films like Suspiria and Dawn of the Dead were revolutionizing the genre, and Italian filmmakers like Dino Delaurentiis had established themselves in the Hollywood studio “system”. The films of Cozzi are in many ways an encapsulation of why native-born Italian science fiction and fantasy failed to find a corresponding niche in this ecosystem. At their best, especially with Starcrash and the first Hercules, they had the offkilter, genre-bending freedom of the 1930s pulps. At worst, they were stilted and bizarre yet also oddly tame, and this film is the quintessential example, in ways that will take quite a bit longer to dissect.

The foremost problem is that the movie suffers from a quite strange lack of action. Apart from a few very meaty gore sequences and some sparsely spaced human-on-human fight scenes, most of the movie is people talking. This feeds directly to an even bigger problem: The dialogue is incredibly and altogether inexplicably bad, all the more so when compared to other Cozzi movies. It’s quite clear that he could write and direct dialogue that “works”, at least within the genre conventions and assumed settings of myth and science fantasy. Here, in a literally down-to-Earth setting, the impression I personally get is akin to Robert E. Howard trying to write a car commercial. It all feels either impatient or entirely befuddled, exaggerating the flaws that were undoubtedly in Cozzi’s writing to begin with. Of course, this wouldn’t be complete without obvious dubbing, notably a black foreman at the cartel plantation who sounds more like a Russian taxi driver. The most unaccountable failure is Marleau’s dialogue, which if it is not entirely dubbed was somehow written, delivered and recorded in a way that makes her sound like a supporting character in a telenovela.

Even with these flaws, however, there is enough that is creative or at least interesting that I can’t actively dislike it the way I do some of the films featured here. The main characters are well-developed and likable despite the issues with the dialogue. The soap-opera level inanities collectively achieve a believable sense of tension and domestic awkwardness, particularly in a scene where the astronaut and the cop debate whether to knock on the heroine’s hotel room door while she faces an egg left in her bathroom There is also a convincing level of chemistry between the astronaut and the heroine that doesn’t quite become romantic. This peaks early on with a meeting in the astronaut’s apartment, where the heroine delivers an infamous one-liner about what he could or couldn’t do with a crane.

The most interesting aspect of the film is the cartel (very much my own designation), whose presence gives the movie the feel of a gangster flick with the aliens thrown in. On more careful consideration, they prove less like a criminal organization than a cult set on mass suicide, something the story leaves frustratingly underdeveloped. There is at least an unnervingly cold-blooded fanaticism throughout their ranks, from a trio of minions who rupture one of the eggs when cornered to a leader who seems to speak directly for the alien presence. By comparison, the eventual appearance of the alien feels quite routine, which as we shall see momentarily is really saying something. To me, it feels in many ways preferable to have left the directing alien threat unseen or wholly ambiguous. It could be a singular alien, a Borg-style hive mind a shared delusion of the leader and his followers, or any and all of the above, and still just as terrifying if done with the flare the film’s creator was certainly capable of.

For the “one scene”, I had a few good choices, but it was always going to be the finale with the alien. After a suitably dramatic buildup from the cartel/ cult leader, the heroine is led into the presence of an enormous creature surrounded by hundreds of the eggs. A few establishing shots establish its huge size, but it is the closeups that make the scene. It has the look and feel of a Lovecraftian demon/ monster/ god brought straight from page to screen (certainly more effectively than many Lovecraft adaptations). The detail shots reveal gooey textures, subtly textured surfaces, multiple orifices and a single, truly hypnotic eye. It remains inert (per the lore about all the rig was capable of) while using its psychic powers to draw its victims within range of a proboscis that serves as its mouth. The cop is lunched feet-first in the most complex and effective effects shots of the movie. Then the lady shambles forward wide-eyed, just as the astronaut catches up. As the predictable rescue unfolds, there is one more dramatic shot as the cult leader emerges from the flames, just long enough to reveal his gruesome fate.

What I find most interesting about this movie is that it offers more of the groundwork of the franchise it ripped off than any entry in the series up to that time, an odd pattern previously seen way back with Message From Space and Inseminoid. The lead alien responsible for laying the eggs assumes the role of the Alien Queen, which famously didn’t appear until Aliens in 1986. The appearance of dedicated troops to investigate the alien outbreak anticipates the space marines, again unseen until Aliens. The placement of the aliens in a modern setting anticipates the setup of the Aliens Vs. Predator side branch of the Alien series. Most impressively, the idea of a pro-alien cult would be central to the original Dark Horse Aliens comic, whose first issues were published in 1989. It’s this kind of “coincidence” that keeps the field of knockoffs and runnerups interesting, and I find it enough to nudge this one up the rating scale. Let it be a lesson, the one thing the Italians didn’t do is boring, even when they were trying.

For links, the image credit goes to both Temple of Schlock and Offscreen. The latter site gives a reasonably insightful review of the movie. As usual, you can see the feature Introduction for an overview of the classifications and rating scale.
Posted by David N. Brown at 5:21 PM