Space 1979: The one where brain slugs crash a frat party 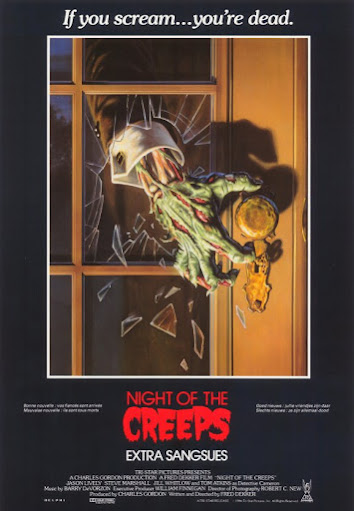 Title: Night of the Creeps

In planning this feature, my hardest decisions have been whether to cover horror, especially zombie movies. As I have recounted elsewhere, I got into zombies back when most of what was out there was movies from the 1970s and 1980s, exactly the period I’m trying to cover here. (I also wrote my novel Walking Dead before the show came out.) For the most part, however, these are not the kind of movies I want to cover here. At the same time, there are definitely a few I have  wanted to make an exception for, particularly those with a science fiction element. For this review, I’m finally getting to one of the very best, the romp known as Night of the Creeps.

Our story starts as usual in space, with a short sequence of an alien with milk-white eyes running through the corridors of a spacecraft with a strange canister. The canister is launched into space, to land on 1950s Earth, where it intersects with the stories of a young woman, her date, her police officer ex and an axe murderer. That episode is promptly followed with a jump to 1986. We meet two nerds who break into a lab on campus as part of a frat initiation, under instructions from a jock who freely tells his soon-to-be-ex girlfriend that he won’t admit them even if they succeed. They find a freezer with a body that proves not quite as dead as it appears. In fact, it’s one of the gentlemen from the 1950s, infected by alien slugs that can control the bodies of the living and the dead. While the slugs multiply, a romance is sparked between the jock’s ex and one of the nerds, and we also meet a hardboiled detective who was the other man in the ill-fated trio shown at the beginning. When a bus crash leaves many of the frat boys dead or maimed, the protagonists and a swarm of the reanimated gather for a final siege at a sorority house.

Night of the Creeps was the first feature by director Fred Dekker, whose subsequent films would include Monster Squad released the following year. The cast included Jason Lively of TV’s original 21 Jump Street as the lead/ nerd Chris, Steve Marshall as his crippled companion JC, Tom Atkins of The Fog and Lethal Weapon as the detective, and veteran cameo actor Dick Miller as the custodian of a police arsenal. Two endings were filmed, of which I consider the theatrical ending superior. The movie had an estimated budget of $5 million, and made less than $600,000 at the US box office.

For zombie movie connoisseurs, Night of the Creeps stands out mainly for its high budget, production values and strong cast. By comparison, Reanimator was made for $900,000, while the original Dawn of the Dead cost $500,000 to make. Atkins stomps the scenery as the detective and clearly has a blast doing it. His one-liners grow increasingly nonsensical yet no less entertaining, while his big reveal about the fate of his old flame has genuine depth. By comparison, the rest of the cast mostly register as uniformly competent (which is impressive enough). Jill Whitlow gives a decent turn as a damsel who turns Ellen Ripley in the final scene (the same year Aliens came out!), while Dick Miller supplies his usual gritty charm in a tense scene that doesn’t quite provide a resolution. My pick for the best performance is Marshall. He conveys genuine vulnerability without overplaying the role as tragic victim. His performance culminates in perhaps the most surreal moment of the movie, as he narrates his own infection and death on tape.

The humorous yet subtly disturbing tone of the movie comes through with the undead and the slugs that create them. A number of gags come from unobservant characters casually encountering the zombies, most memorably a bloody and unclothed corpse that gets an inane pleasantry from a police officer as they pass each other. On a deeper level, these undead really are unnervingly good at blending in; their only equals in this regard are the thoroughly domestic revenants of Life After Beth and the cosmic repo men of Sole Survivor (reviewed on my old blog). Without the usual hunger for flesh, they mostly seem to wander around until the incubating parasites are ready to emerge. As a bonus, we also see several infected animals, including a very creepy dog that figures prominently in the theatrically released ending.

The slugs themselves have always fascinated me as much as the zombies. I commented in the Critters review that even very good practical-effects creatures often struggle to convey speed and agility. These are at the opposite extreme, almost comically low-tech in appearance but zippy as roaches on skates.  When they emerge, they either launch themselves from a host’s mouth or erupt en masse. In the finale, we see the remaining slugs gather in a swarm that orients  toward any prey like iron filings toward a magnet. I have never been satisfied exactly how these creatures were created. Some shots (including ones removed from the theatrical release) look like stop-motion, others are clearly practical effects. Normally, I would long since have looked up the details, but this is one time I am more satisfied with not knowing all the details.

This brings us to the “one scene”, and I had a harder time than usual. Still, there was one that stood out all along, and it is again supplied by Marshall. Around the midpoint, JC is in the bathroom in a building where several of the infected have been wandering. An establishing shot finds him casually examining graffiti on the walls of the stall. The camera then gives us the character’s viewpoint as he opens the door, revealing a collapsed victim with his head split open. There are glimpses of several slugs darting around before JC shuts the door. He then takes out a book of matches and sets the whole thing alight with one of the few matches remaining. As soon as he sets the book on the tiled floor, a slug instantly strikes. The flame incinerates the creature but burns itself out. JC must crawl for safety without the braces he uses to walk. The scene ends with a floor-level shot of a slug zipping straight for his mouth.

Like Critters, Night of the Creeps marked both a high point and the end of an era for its genre, except that it did not get the benefit of a profitable release or sequels. It came out at the tail end of a wave of relatively big-budget zombie movies (notably Reanimator and Return of the Living Dead), and there can be little doubt that its failure contributed to the decline of the genre thereafter. Fortunately, it did not fall through the cracks as many vintage zombie movies have. Through the more recent booms and busts of public interest, this movie has remained reasonably easy to find, and even influenced “new wave” zombie movies like Slither. If you haven’t seen it, it won’t be any trouble to obtain. If you have, it’s well worth watching again. In that respect, at least, it’s fully comparable to other movies I set out to celebrate with this feature, and that was reason enough to work it in.

For links, the image credit goes to JoeBlo. I recommend the Brandon's Cult Movies review; I am literally in awe of the channel's creator. As usual, see the Introduction for details of the ratings scale, classification system and inspiration of the feature.