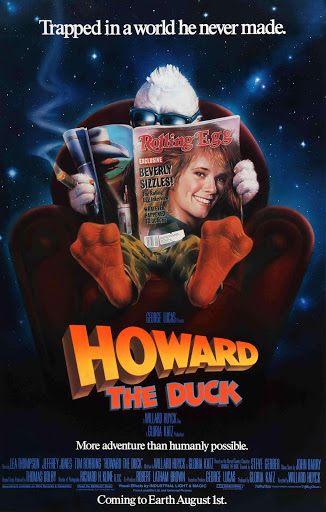 One thing that should be clear about me from this feature is that I have a cast iron stomach when it comes to movies. I’ve sat through some of the most legendarily horrible movies ever made, and when I start a movie, I really sit through it, especially if I’ve spent any amount of money on it. It takes something really exceptional for me to stop watching a movie. It’s one thing if I get bored or lose interest, usually if it’s a romance or drama that would be hit or miss with me anyway. It’s another matter for me to quit something because it’s flat-out bad. Then if I give up because it’s too weird, we are really into extreme territory. For this review, I’ve gotten to the one that did it for me, in the first ten minutes.

Our story opens with a view of another world where birds instead of primates are the dominant intelligent species (with a civilization seemingly built on bad puns). We follow one particular seemingly average bird named Howard to his apartment. As he sits down with some (ahem) recreational reading material, he is suddenly sucked into a wormhole that leads to Earth. After a rough landing, he meets up with an unlucky musician named Beverly and a scientist who hasn’t risen above intern. As his misadventures continue, he gradually finds out about an experiment that created the wormhole. He soon realizes that another being known as the Dark Overlord has come through, masquerading as the scientist’s boss. In the final showdown, he must choose between saving the Earth. And if the outcome was meant to be in doubt, they wouldn’t have put the final musical number in the TV spots.

Howard the Duck has been remembered as the creation of executive producer George Lucas, though differing accounts have emerged of his involvement. Per the lore, Lucas may have been interested in making a movie using the character, introduced in Marvel Comics in 1973, before Star Wars was released. The eventual production was a joint venture between Universal, Lucasfilm and Marvel. Lucas reportedly argued for producing it as a live-action film rather than an animated feature. The ILM crew provided animatronics and effects, including multiple puppets and suits to represent Howard and a stop-motion creature by Phil Tippett as the Dark Overlord’s true form. The final budget reached an estimated $36M. Unfortunately, the finished film failed to resonate with critics or audiences, earning only $16.3M in US box office. Worldwide receipts may have brought the gross to $37M, presenting a relatively early example of a movie that earned more in foreign markets than in the US.

My own experience with this film was vague awareness without much further interest, going back to ads for its occasional airings on 1990s TV. I finally gave it a try on Netflix streaming, but didn’t get past its opening sequence, which I still reckon the most strange and risqué in a movie with plenty of competition. Eventually, I ordered it on disc, and in the last year or so, I finally bought it on Blu Ray. That finally gave me the opportunity to fully appraise the film.

The main thing to stand out about the movie is Howard himself. The practical effects are used to genuinely good effect, as is the voice work of Chip Zien. It’s all the more impressive that the lines were put in after filming. Any problems with the effects are of the “uncanny valley” variety, particularly the very anthropomorphic eyes; after seeing that singled out by none other than James Gunn, I began to wonder if that was part of what threw me off way back when. Overall, Howard is a likeable if sometimes disreputable character. Most of his jokes really aren’t that funny, but feel like a natural response to his predicament. There is better payoff from his moments of indignation at human treatment of birds. The human characters are well-cast. Lea Thompson gets the most attention as Howard’s question-mark love interest, though her scenes include some major “cringe” moments. Harold Robbins is more impressive as the scientist, in one of his earlier roles.

The other major creature is the Dark Overlord, played by Jeffrey Jones and voiced in part by Brian Steele. Jones delivers an entertaining and increasingly menacing performance, noteworthy for apparently total indifference to what human bystanders know about him. His transformation is augmented by some impressive practical effects, including an unnerving tentacle. By comparison, the stop-motion incarnation is disappointing, which is positively heartbreaking for me to say. The model seems like a deliberate downgrade from realistic creatures of Star Wars and Dragonslayer, and even more at odds with the effort put into Howard. The creature design is almost distractingly strange, something like a mashup of an angler fish, a scorpion and a Rancor monster. I was particularly jarred by a prominent set of fangs that look almost like mandibles, a year before Predator was released.

For the “one scene”, my pick was inevitably going to be a diner scene that leads into the final act. Howard and Beverly make a stop with the metamorphosing lead scientist. While they order a meal, the Overlord quite freely announces his identity and his further plans to wipe out humanity, seemingly unconcerned if anyone tries to stop him. Meanwhile, Howard gives the best of his fits when the waitress serves him eggs, then gets into a rapidly escalating dispute with a band of duck hunters who begin to consider putting him on the menu. It’s a great and surprisingly low-key bit of comedy, much better than a simple summary can convey. However, it serves all too well as a reminder what the whole movie should have been like.

On a deeper level, my strongest reaction to this movie is that of looking at a test reel for a movie that was never made. In my own judgment, it “should” have been animated all along. I am tempted to say it might have been better still if the movie had gone far enough for a straight-up R rating. Unfortunately, I’m equally satisfied that the actual production date is either 10 years too early or 10 years too late for that to have worked. In the 1970s, such a film could have stayed in the underground scene with the likes of Fritz the Cat, while in the1990s, it could have taken its pace as the west’s answer to the anime revolution. The 1980s, on the other hand, were a low point for the acceptance of adult-oriented animation, despite (if not because of) the successful example of Heavy Metal. Being associated with a name as prominent as Lucas could have easily proved a lightning rod for further censorship and general meddling from the studios and the “moral guardians” in the general public. On watching the inuendo between Howard and Beverly, I must add that I’m glad nobody pushed that envelope any further.

In the end, the lesson of history will always be that we have to judge what is rather than what could have been. In those terms, this was at the least a worthy and creative experiment. Even if you’ve seen it before, it’s worth trying again, and like me, you just might change your mind.

For links, all I have this time is the feature Introduction. More to come tomorrow.