Space 1979: The one where the monster hacks the computer 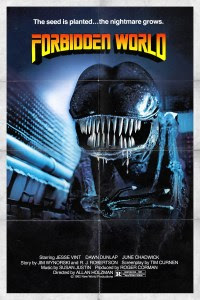 This feature has been going for a while now, so I recently decided to look back at a list I compiled when I first though of this. I determined that I had reviewed 11 of the movies on my original list, while a total of 8 reviews were of movies I hadn’t originally included. The big difference was that I hadn’t gotten to a number of Alien knockoffs I had originally considered, including a few I still haven’t made up my mind about. For review number 20, I am getting back to one that’s been in from the beginning, a specimen called Forbidden World.

Our story begins with a man floating in space, haunted by visions of a hideous monster (and for some reason women in the shower). It is unclear whether these are meant to be flashbacks or premonitions, but after a completely gratuitous space battle, we see him arrive at a research lab on an uninhabited planet, accompanied by a bot that looks like an offbrand stormtrooper. The staff reveal the results of their work, a genetically engineered organism initially encased in a suspended cocoon. While the crew are occupied with various hijinks, the creature gets loose and kills off a few of the staff. While the surviving crew hunt the monster, the protagonist learns darker details of the lab’s research and the demise of another of the staff. As the final act approaches, the creature makes itself at home in the lab. The two female crew members hatch a plan to attempt to communicate with the creature (hashed out while they are both in the shower), and a dying senior researcher comes up with a more desperate scheme to fight the monster with his own diseased cells.

Forbidden World was made by the egregious Roger Corman, using sets originally created for Galaxy of Terror as well as spaceship effects from Battle Beyond The Stars. Like Galaxy of Terror, it was widely regarded as an Alien ripoff, with even more justification given the strong likeness of the creature to the Alien. The cast included June Chadwick, best known for TV work including the series spinoff of V, and career offender Jesse Vint as the lead. Its release and titles ended up being a saga in itself. Posters featured two versions of the artwork, one with a still of the creature from the movie and the other featuring an entirely fanciful beast. Curiously, while this is one of quite a few movies to feature a creature clearly based on Alien, it is the only one to come to my attention that included an image of one in the movie poster. The alternate title Mutant appears notably but not exclusively on German-language posters. An unrelated 1984 film originally titled Night Shadows was also known as Mutant in its home video release. In an ironic twist, the previously sighted knockoff The Falling was sometimes known as Mutant 2; which movie this was supposed to tie into is lost to history.

In the course of these reviews, I have several times acknowledged movies I wanted to like. This, on the other hand, is a movie I would have loved to tear apart. This is a knockoff that seems determined to do everything wrong that its source material did right. Where Alien looked and felt ahead of its time, this movie looks like it was shot by Dario Argento in actual Technicolor. Where Alien’s camerawork and editing clearly and coherently show what is supposed to be happening, many of this movie’s sequences are as choppy as a descent-into-madness horror movie. Where Alien was quite straightforward in its biology, this movie buries itself in convoluted pseudoscience. Where Alien was surprisingly subdued in its violence and almost free of explicit sexuality, this movie goes full frontal and over the top. Yet, these are by all indications conscious choices. This is the surprisingly rare movie that really tries to be “so bad it’s good”, and even more uniquely, it succeeds without descending into outright parody.

Any chance of further redeeming qualities clearly lie in the monster. This is at face value the one part of the production that misses the point of Alien rather that defying it. The Alien suit (made by practical-effects master Carlo Rimbaldi from Giger’s designs) looked complicated, but its basic outline is quite elegant, a fact reflected in the range of motion achieved onscreen. The creature here is a mishmash of fangs and limbs that requires highly selective camerawork just to appear mobile. It is certainly a creepy creature, however, with the cartoonish but no less menacing qualities of one of the Dark Horse Aliens comics. It also offers a reasonable range of behavior that suggests intelligence and a certain amount of vulnerability. It hides or retreats from crew members who are armed, and at one point leaves a decoy in the form of a discarded cocoon. It navigates the lab without difficulty, at one point cutting off a fleeing human. In the movie’s most surreal moment, it even uses the lab’s computer equipment to communicate with the crew, albeit just long enough to lure the heroine within range.

Some further comment is in order about the two women in the crew. The movie’s male characters already bounce between annoying, creepy and bland, and its women suffer far more, especially in comparison with the standard set by Alien. Even here, however, the movie sidesteps the most obvious causes for offense. To start with, there is at least none of the hypocritical moralizing of a slasher entry. When the women’s adventures are shown, it is clear that they are enjoying themselves as much as the audience is expected to, without the immediate punishment of violent death. The gender roles are a bit iffy, with Chadwick being clearly competent while her coworker played by Dawn Dunlap tends to hang around without obvious duties or functions. Their big plan to reach out to the monster is particularly problematic; on this point, they are arguably made to appear naïve, but still not stupid, particularly since the creature actually responds. The one true “cringe” moment is the death of Chadwick’s character. If the implied fate of Lambert in Alien was discomforting, the exit wound shown doesn’t leave much room for a reconstruction that isn’t from the bottom up.

For the “one scene”, the best of many absurd scenes is the creature’s first attack. At this point, it is in by far its creepiest form, the suspended cocoon which resembles a nest of tent caterpillars. A crewman who seems to be the space janitor sees the cocoon pulse (very!) menacingly. When something oozes out, he reports that the creature is doing something strange and prepares to shut the glass case holding the creature. Because sensible behavior certainly isn’t going to move this story along, something like a living fruit rollup springs and latches onto his face. The victim proceeds to destroy seemingly every piece of equipment in the room as he flails about in agony, only occasionally making a visible effort to remove the creature from where it has been all along. Eventually, the creature eats in far enough that blood starts to spurt. The gore literally begins to cloud the camera, which is revealed to be a security camera feed. A final cutaway shows the rest of the crew, who have been specifically warned to check on the creature, paying absolutely no attention whatsoever.

Overall, this movie is one of the best Alien knockoffs, which is the reason I didn’t get to it much further. I seriously considered rating it higher than I have, but there was way too much that personally annoys me to get off that easy. Compared to The Falling, this is clearly superior in production values, but the nonsense factor brings it down where the other was bonkers enough to get up to the middle of the scale. This is the type of film that never tried to be anything but what it is, and for that I can leave it be.

No links this time. As usual, see the feature Introduction for details on the classifications and rating system. (It's about time someone did.) More to come!
Posted by David N. Brown at 10:04 PM