Space 1979: The one with cartoon robot genocide 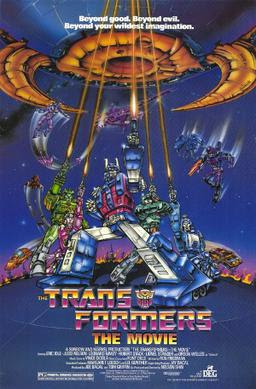 When I wrote up my Introduction for this feature, my main ground rule was to focus on films from 1975 to 1985. You can judge how this went from the fact that I’ve already reviewed 3 movies from 1986 alone. I also announced that I would be sticking to live-action releases, a rule I’ve so far only broken (or bent) for ThePhantom Tollbooth. Since most of my rules are already getting shot to Hell, I decided I might as well double dip and go back to 1986. This time, we have not just a cartoon, not just an ‘80s cartoon, but the ultimate ‘80s toon. Welcome to Transformers, the first movie.

Our story begins with views of a planet inhabited entirely by peace-loving humanoid robots, complete with happy robot kids. The idyllic scene is interrupted by a planet-sized ship that looks like a cross between Pac Man and the Death Star, which the planet’s inhabitants identify on sight as Unicron. The invader literally devours the planet, complete with loud chomping sounds, sucking in the refugee ships that try to escape… and this is all still in the first ten minutes. Meanwhile, on Earth in the far off year of 2005, the civil war of the Autobots and Decepticons heats up with a battle where several bots actually die, including Optimus Prime. His opposite number Megatron escapes, only to be overthrown and cast into space by his second-in-command Starscream. The Decepticon runs into Unicron, who upgrades him with new powers and a higher-budget voice actor. He then sets out on a new mission, to hunt down the surviving Autobots and their human allies before they can unlock the Matrix of Leadership, a mysterious object (to the extent it’s never been seen or referenced on the show) capable of destroying Unicron. Meanwhile, the heroes face new perils and find new allies who seal their alliance with… a musical number? To a Weird Al Song???

Transformers: The Movie was a joint production of Sunbow Productions, Marvel and Toei Animation. The finished film was distributed by the De Laurentiis Entertainment Group, the offenders responsible for Flash Gordon. The voice cast featured Peter Cullen, Frank Welker and the late Christopher Collins in their roles as Optimus Prime, Megatron and Starscream from the show. Collins also voiced Cobra Commander in the Sunbow GI Joe cartoon. The movie added Leonard Nimoy as the upgraded Galvatron, veteran actors Lionel Stander and Robert Stack as Autobots Kup and Ultra Magnus, and Orson Welles in his final role as Unicron. It was made for $6 million and made a US box office of $5.85M. Orson Welles was quoted as telling a biographer, “I played the voice of a toy… My plan to destroy whoever-it-is is thwarted and I ter myself apart on the screen.”

As I’ve written in toy-related blogging, Transformers was something that I loved the idea of without getting into the thing itself. To me, the brand usually stood out as the ones that cost the most and were easiest to break. As a consequence, I got to the Transformers movie very late. As a bonus, it was the direct inspiration for most of my ratings scale, which I first considered for animation reviews. My indelible impression of it is that it feels like a twin to Heavy Metal, the “anime that’s not anime” relic from 1980. More specifically, it feels like what would have happened if the crew behind that one had done everything possible wrong, which is enough to put in the “evil twin” category in my own head. If it comes down to it, the big difference is that since the Transformers movie was made in Japan, I might be able to call it anime without inciting an angry mob. (Cue angry mob in 3, 2, 1…)

Moving onto specifics, I don’t know how far I can even go with this one. This is the kind of movie that anybody but me would find equivalent to an acid trip. But it’s not disjointed or incoherent the way the movies I would give that distinction to (see The Day Time Ended). There’s just so many bizarre images and events happening that even I can barely follow it all. It’s plagued by a more unfortunate tendency to follow everything that starts to earn goodwill with something that’s dumb and annoying. Most of the battle scenes are set to bizarrely tame ‘80s rock. The good dialogue from Kup and Ultra Magnus is mixed in with the Dinobots and (dear Logos) Wheelie. The surreally creative scenes on the Sharkticon planet are followed by the lamentable dance sequence with the Junkions. Then there is the finale, where Unicron’s mindboggling transformation is directly undermined by an outlandish disregard for scale, even by this franchise’s standards. (Shout out to tfwiki here.)

In all of this, the “one scene” might seem like a lost cause, but I definitely noticed one very early on. Kup and Hotrod are stranded on the Sharkticon planet, populated by biomechanoid sea creatures. When a group of natives approaches, Kup tries a “universal greeting” that seems to get respectful attention, then begins giving them power packs in a show of further goodwill. When Rod becomes concerned, Kup reassures him, “Don’t worry, they’ll reciprocate!” Then the natives transform into more threatening reptilian shapes, just as Kup runs out of power pellets. Rod says, “I thought they’re supposed to reciprocate!” The creatures attack, and momentarily Kup is telling one more story as they’re marched off to the dungeon of the planet’s ruler.

Needless to say, I could keep writing about this a lot longer. What’s really worth saying is that this is the kind of movie you can laugh at for doing virtually everything wrong, yet still like. The closest comparison in that respect would be Planet of Dinosaurs, or the venerable baddie Plan 9 From Outer Space. No matter how far off the rails it goes, it stays almost hypnotically entertaining, which is why I haven’t rated it quite a bit lower than I have. It’s a guilty pleasure, but a pleasure none the less. Till all are one!