The one with a car, a cartoon dog and the voice of Bugs Bunny 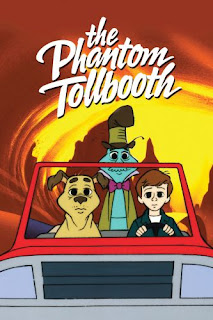 For this installment, I’m back with something else I said I wouldn’t do in my Introduction, an animation review. I’m honestly doing this, because I’ve ended up with a shortfall at both ends, with material I plan to review that I haven’t given a proper viewing and other stuff I’ve viewed but haven’t decided how or if to include. It’s a testament to the present selection that I made time in the middle of it all to watch one particular movie, one I watched when I was young and found far more relevant when I looked it up again. This is The Phantom Tollbooth.

Our story begins with a musical number accompanying a kid named Milo wandering around town. When he returns, he find a huge box sent special delivery. Declaring he has nothing better to do, he pulls a tab on the box, and a toll both unfolds, complete with a kid-sized car. He drives through and discovers an allegorical fantasy world divided between the realms of words and numbers, each with its own eccentric ruler. It’s revealed that the kingdoms were once united, but split after the disappearance of their original rulers, the princesses of Rhyme and Reason. With the aid of the Tock the Watchdog and the Humbug, he sets out to find the princesses, only to find the path blocked by the Lethargians, the Terrible Trivium and the Demons of Ignorance.

The Phantom Tollbooth was produced from 1966 to 1968 by the animation division of MGM, the studio that had previously thrown its hat in with the original Tom And Jerry shorts, based on a 1963 novel by Norton Juster. The studio brought in WB/ Looney Tunes director Chuck Jones for the project, along with the legendary voice actor Mel Blanc. The main roles went to radio personalities Larry Thor and Les Tremayne as Tock and Humbug, with Butch Patrick cast as Milo both as voice actor and in opening and closing live action sequences. The film’s release was delayed until late 1970, to generally good reviews but uncertain returns. MGM closed its animation division and withdrew from the industry soon after the film’s release, a decision that was most likely made prior to and independent of the film’s success or lack thereof.

My own story with this film is that I was shown the film in 5th or 6th grade in the early 1990s. I can also just remember reading portions of the book, I think before I saw the toon. The book struck me as a somewhat odd fantasy, mostly interesting for the character of the Watchdog. The movie was… something else. As with many things, I remembered it but didn’t think to look it up again until years later, when I bought it for viewing material on my epic trips to and from my first job. One of these days, I may get back to the book, too.

Watching the movie as an adult, the most striking and disconcerting thing about it is how conventional it is for most of its length. The musical numbers especially are quite generic, with the exceptions of “Noise, Noise, Noise” and the Doldrums sequence (dear Logos, more on that shortly). The rogues’ gallery of supposedly “whacky” characters, including several of those voiced by Blanc, tend to come across as either underdeveloped or trying too hard. Even Milo coasts along a little above the level of a cipher. These and further issues with pacing and tone make far too much of the film feel like a better movie’s filler.

The counterbalance to all of this are the moments that seem to come out of nowhere and hit like a ton of bricks. Some of the “wacky” scenes do manage to achieve real effect, particularly a sequence where a conductor directs a sunset and Milo tries foolhardily to follow up his act. Then there are the scenes with the Watchdog, the most vivid and well-realized character in the movie. Finally, there are the Watchdog’s opposite numbers, the various Demons. They are at once silly, banal and chilling, especially the faceless Terrible Trivium, who tries to befriend the protagonists before revealing his true nature. It ends in a melee slew of improbable monsters labelled with all too familiar titles that gather together into one giant monster, for an allegorical battle that wears its moral on its sleeve without quite becoming moralizing.

For the “one scene”, sticking with the established format, the choice was always going to be the scene in the Doldrums. Early in his adventures, Milo takes a detour in a swamp that rivals the planet Dagobah for strangeness. Soon, his car is deeply mired in the midst of beings called the Lethargians. The creatures prove almost but not quite shapeless, seemingly of a piece with the muck of the swamp. They even multiply by fission and slump back together, producing freakish visuals that I absolutely remembered from my very first viewing. They sing their song to Milo, slowly becoming more malign as his car sinks deeper, seemingly losing its own shape as it disappears into the slime. Then the Watchdog rushes to the rescue, promptly warning Milo, “They don’t want you doing anything, including eating and breathing!”

In hindsight, The Phantom Tollbooth is another movie that marked the end of an era, particularly for the studio that made it. It also represents a truly irreproducible experiment, merging old-school wacky and new-wave psychedelic under the uncomfortably banner of corporate-sanctioned morality. One extra discovery I made is that Norton Juster is still alive, and apparently active. For me, this movie represents the year 2016, when I was spending 4 to 5 hours a day on public transportation, and other developments were quickly making it all the more relevant. I post this review now as a hopeful gesture. I rediscovered this movie at the tail end of the darkest chapter of my life. I can hope that coming back to it now can mark the start of better days.