Space 1979: The one where Rob Lowe’s brother rescues Buffy the Vampire Slayer from Hell in a 1940 Ford 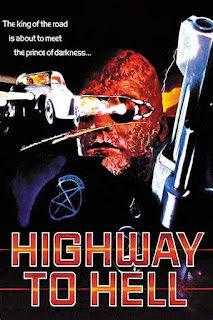 As outlined at the very beginning (even before the Introduction), this feature was conceived as an overview of 1970s and 1980s sci fi with a focus on the period from 1975-1985. At the same time, I always meant for this among other “rules” to have at least a few exceptions. With this review, I’ve finally gotten to the big one that I’ve been planning on, a 1990s movie. In the process, I have considered a fair number of movies, but as usual, there was one that was never in doubt. It is in fact the most egregious example of a 1990s release that still feels like an “Eighties” movie. It also happens to be one of the most mistreated, neglected, unclassifiable and flat-out bizarre movies to reach the light of day in the “modern” era. I present Highway To Hell, and the first thing to know is that it does not at any point use the AC/ DC song.

Our story begins with two youngsters named Charlie and Rachel trying to elope in a Ford Pinto. When they take a wrong turn on a desert background, they are suddenly pulled over by a literal cop from Hell, who grabs Rachel and drives away in a patrol car fit for Mad Max. Charlie seeks the help of an old man, who gives him a semi-antique shotgun and a souped-up hotrod for the trip to Hell and back. With his new ride, Charlie finds the Hellcop’s portal to Hell, which proves to be a desert landscape where the sun never sets and the damned souls roam the same desolate roads as the demons. He chases the Hellcop to an infernal city, with the aid of a repairman named Beezle and his adopted son. At his destination, he discovers that Rachel has been offered a chance to be no less than the bride of Satan himself. The damsel must make her choice, and then the pair must make their way home, with Hellcop in pursuit.

Highway to Hell was made by Hemdale, a low/ medium budget studio previously responsible for The Terminator and Return of the Living Dead, on a budget of $9 million. The company was then in a convoluted web of financial troubles and internal intrigues that undoubtedly contributed to the questionable handling of the film, which had its release delayed for over a year and then was consigned to a limited release for a gross of about $30,000. Filming was completed in Arizona and Utah, with outdoor shots of the desert serving as the Hellscape. Chad Lowe and Kristy Swanson of Buffy the Vampire Slayer (the movie) were cast as the hero and damsel, with Patrick Bergin as Beezle and C.J. Graham of the Friday the 13th franchise as the Hellcop. An extensive supporting cast included Kevin Peter Hall of Predator, Ben Stiller and his family members Jerry Stiller, Amy Stiller and Ann Meara. Its theatrical run was followed by a comparatively successful VHS release, but the film then fell “out of print” until its release on DVD and Blu Ray in 2016.

For this one, things are going to get complicated. To start with, I decided some time ago that I believed in the Semitic archetype of Tiamat far more than the conventional figure of Satan, the rebel angel and pet enemy of God; while I can’t say this movie contributed to this, it certainly has a role in my appreciation of it. As for my direct experiences with the film, I can remember seeing a favorable review of it in the local Arizona paper at the time it (barely) came out. Many years later, I ran across it in Netflix streaming, which it was dropped from soon after. I kept an eye out for it for several years after that. When I saw that it finally got out on disk, I immediately ordered the Blu Ray and finally set up a Blu Ray player that had been sitting in the box for a few months.

With all of that in the background, I still have trouble deciding what to make of this movie. In style, themes and implied theology, it feels like a cross between Dante’s Inferno and that of Larry Niven, with touches of C.S. Lewis’s The Great Divorce. The film’s vision of Satan is pretty close to that of the Book of Job, unquestionably evil but potentially a necessary evil, while Hellcop is as inscrutably inhuman as the chthonic god-demons of the Greek netherworld. By comparison, the lesser demons and the damned are mostly indistinguishable from each other in their meanness and banality, like inmates and jailers who have reduced each other to noise-level apathy. The concepts are greatly improved on by the sets, makeup and effects, particularly a stop-motion Cerberus, as well as the aggressively cool soundtrack. Then there are the gags and visual puns, usually awkward but rarely without a measure of weight, notably a scene where the least fortunate souls are reduced to asphalt.

Perhaps inevitably, the story of the hero and the damsel almost fades into the background. Charlie is likeable without being especially virtuous (particularly in a debate whether to consummate a marriage in the Pinto), while Rachel is evidently kind with a touch of spunk that keeps her from being too absorbed in pleasing her man. The devil’s temptations become a moderately effective allegory for the tensions of their relationship. Then, again, there is Hellcop, sometimes called Sgt. Bedlam, so uniquely implacable that it is easy to picture him someday trying to take out his boss. Finally, I have also not even tried to cover the side story of Royce, the one character who seems able to make a bargain with the Sergeant; that is one story best appreciated in the context of the movie.

For the “one scene”, the choice far and away is an incidental stop by the Hellcop at a diner. He is met outside by a Ben Stiller as a ghoulish cook frying eggs and bacon on the pavement. Inside, the diner is filled entirely by the souls of damned policemen, presumably punished for varying combinations of corruption and incompetence. The zombie-like patrons literally groan for donuts and coffee, in a clear homage to Return of the Living Dead, while the only waitress (played by Meara) chatters inanely behind the counter. When Hellcop enters, he chains Rachel to the counter with handcuffs that are actual hands, and is promptly served donuts and visibly boiling coffee. One of the desperate customers, if I’m not mistaken played by the late Jerry Stiller, finally grabs one of Hellcop’s donuts. The rest of the damned cops promptly scatter as Hellcop turns to deal with the interloper, allowing Rachel to make her move. It’s a scene that’s surreal, awkward and not really that important, yet it perfectly encapsulates the movie’s post-modern vision of damnation.

Once again, my closing comment is on the rating. This movie is the second for which I have been tempted to introduce an “unrated” category (which I’m probably going to get to if/ when I start doing animation), the other being Zardoz. As with that film, I literally felt that I had to go with the present rating or none at all. Of course, there are plenty of things that can be said to counter this: The story is strange and often doesn’t make sense; the jokes are usually awkward at best; the production values are even more dated than the time the film was actually made; and it failed in large part because the strange concepts and marginal execution directly alienated audiences as well as those responsible for distributing and marketing it. But to count all these things against it is like condemning Zardoz simply for being a freaky, semi-pornographic 1970s flick; whether or not you like it, it clearly is what its creators meant it to be, and this time, I for one like it.