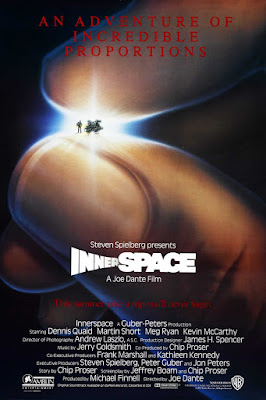 I have regularly commented on my uncanny memory and the role that has played in my pop culture experience. Some of my earliest recollections regarding movies are of going to the theater, but even for me these are relatively few and far between. I’m sure I can remember seeing Return of the Jedi, An American Tail, and one of the Muppets movies, all when I was no older than 6. I can even remember seeing what must have been the “Rite of Spring” sequence from Fantasia before the 1990 re-release, which from independent reading would have been in 1982, when I was 2. Most of what I can remember, however, starts at about age 7. The present review is among these relatively early recollections, and also one of the very first I can place in pretty specific context. With that, I introduce Innerspace.

Our story begins with introductions to two characters: Tuck, a daring test pilot in a rocky relationship, and Jack Putter, a neurotic clerk still trying to learn to stand up for himself. When Tuck volunteers to be the test subject for a shrink ray or something like it, a series of hijinks and slapstick puts his minisub capsule inside Putter. The pilot manages to communicate with the clerk, right about the time a vaguely defined group of spies and profiteers catch up with them. Under Tuck’s guidance, Putter manages to stay ahead of the bad guys long enough to make contact with the pilot’s girlfriend Lydia. Meanwhile, Tuck must navigate the hazards of the human body, culminating in a showdown with an uber spy shrunk down to pursue him.

Innerspace was directed by Joe Dante, who had built up his reputation with Gremlins, with none other than Steven Spielberg as executive producer. The script was written by Chip Proser, who openly acknowledged the production as an unofficial remake of the 1966 film Fantastic Voyage. The cast was led by Dennis Quaid as Tuck and Martin Short as Jack Putter, with Meg Ryan as Lydia, Kevin McCarthy as the nominal villain and Vernon Wells as his far more imposing henchman Mr. Igoe. The supporting cast included Robert Picardo, later the holographic Doctor of Star Trek: Voyager and First Contact, as an arms dealer referred to as the Cowboy. The film made slightly less than its $27 million budget at the US box office, but turned a profit with foreign showings and especially on home video.

My own experience with this movie was a trip to a double feature, probably at a “dollar theater”. I can remember the title of the other movie, which I can confirm existed, but my further recollections are so weird and gross even I can’t believe I really saw it. Fortunately, Innerspace made a much better impression on my and the family members I went with. Most of what I can remember readily is the effects sequences and the banter between Tuck and Putter. The whole spy story arc and a fair amount of innuendo must have gone entirely over my head, though I can remember a scene where the clerk’s checkout scanner malfunctions disastrously. I saw it at least twice more before I bought it for the viewing that led to this review, most recently during a ride to work during the 2016 election. (My memories of that year are really not great.)

I thought of covering this movie in the course of pondering the possibility of reviewing a “straight” ‘80s comedy or actioner as a frame of reference. Where other movies here have mixed sci fi with other genres, notably The Hidden, this one was a comedy first and foremost, and watching it reaffirmed the extent to which I still don’t “get” 1980s comedies, especially from later in the decade. The actual jokes are funny, the dialogue (especially between Quaid and Short) possibly more so. What continues to elude or repel me is the underlying atmosphere of stereotypes, insecure masculinity and awkward innuendo. What strains me more than the comedy is the spy storyline and especially the villains. The silent, cyborg-like Mr. Igoe is one thing the movie does absolutely right, played by Wells with all the exaggerated humor and deeper menace of the late Richard Kiel as Jaws. If he was the leader or most visible representative of the forces of evil, there would be no further complaints from me. But the film tries to be more sophisticated than it is by adding multiple schemers and factions, none of whom really have a more interesting motive than making money. I have no doubt that this was meant to be a quasi-political statement, and it certainly was a prescient point for a world still in the last stages of the Cold War. But it was the kind of idea that should have been either better developed or set aside.

By comparison, the genuine science fictional scenes are very good, and carry far more weight than can be credited from the relatively short screen time they occupy. As noted, many of the best moments come from the interplay of Tuck and Putter, with some extra awkward humor when various bystanders overhear the latter’s side of their conversations. The scenes of the inside of the body are surprisingly subdued, particularly when compared to the psychedelic visions of Fantastic Voyage, with only a handful of true action sequences. The most effective is a scene where the pair manage to share a drink (which I mercifully misunderstood), followed by the appearance of an unborn fetus when the minisub is transferred to Lydia.

For the “one scene”, there is truly one sequence that keeps this movie memorable, and it is the dogfight between Tuck and the miniaturized Mr. Igoe. The villain’s capsule looks like a cross between a deep-sea exoskeleton and the Slave 1 as he closes in, flying against the perpetual storm of the windpipe. Tuck bests his attacker in a grapple of mechanical appendages, and the enemy ship crashes (which can’t be doing anything good for Jack Putter!). However, the villain ejects and comes back, sporting a drill as the deadliest of a series of prostheses to be seen in the movie. The combatants tumble down to the digestive track, captured as a churning pool of stomach acid. As the villain bores into the minisub canopy, Tuck makes a desperate call to Jack, just before they make the final drop. The outcome is revealed in one last unforgettable shot, which (in contrast to Jaws) resolves any question of the villain’s humanity.

Overall, Innerspace is a perfect illustration why so many of the comedic films I have featured stand out to me as forward-thinking by comparison with their contemporaries. The wackiness of Dark Star was a desperate counterattack against isolation and despair; the satire of The Hidden and Night of the Creeps dug below the surface of society’s niceties; and Deep Space at least wore its anxieties on its sleeve. By comparison, this movie does not reach the heights or depths of other sci-fi comedies/ parodies, but I can grant that even this one is a little ahead of the curve. Its two male characters actually learn from each other, and when the adventure ends, they have further developed rather than blundering their way to a happy ending. It’s impressive enough for a movie that was sold as dumb summer fun, and one more reason why this one has still never been forgotten.