Space 1979 Threequel Trilogy: The one that was supposed to be a National Lampoon parody of its franchise 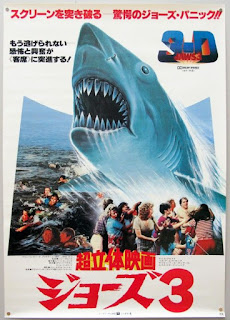 Since this feature hit the 25 review count, I’ve been kicking around some new ideas and different directions. One thing I got back to was an early decision to avoid “franchise” movies, which excluded at least one of the very first movies I listed for consideration. For the next few reviews, I’m not only reversing that decision, but looking at a particular category, the “threequel”. With those parameters, there was no better choice than one of the very first examples, and still one of the most infamous offenders of all, Jaws 3.

Our story begins with the appearance of the movie title, which snaps like the jaws of the titular creature. After more aggressive 3-D lettering in the credits, we see a waterskiing team, and we will see much, much more. Over the next few scenes, we are introduced to a theme park identified as Sea World but feels more like a science-fictional undersea lab, complete with a control room and a network of glass tunnels that look like a hamster Habitrail. The futuristic feel is heightened when we meet our hero Mike Brady, introduced as the son of the police chief from the previous movies but clearly aged far more than the 8 years since the original movie came out. All is not well, as one of the park employees is gruesomely devoured within its boundaries. Brody leads a hunt, aided by Kay, the chief biologist, Fitzroyce, an obnoxious big game hunter, and a pair of friendly dolphins. Surprisingly, they manage to catch the shark in good time, and it becomes a new exhibit. But the shark quickly dies, right about the time the biologist examines the lunched employee. She reveals that the shark that killed him is much bigger… and still in the park.

Jaws 3 was the third film of the Jaws franchise, one of the first American movie series not based on books or other pre-existing material and possibly the first to use simple numbered titles for the sequels. The movie was infamously first proposed as a parody with the backing of two producers of the original movie, a move opposed and ultimately stopped by Universal Studios. The final script was based on a story and outline by the respected writer Richard Matheson, who had previously written the script for Duel for Steven Spielberg from his own short story.  Joe Alves, a production designer for the original movie, was chosen to direct. Dennis Quaid was cast as the junior Brody, with Bess Morgan as the biologist/ romantic interest and Lou Gossett Jr. as the park owner. Roy Scheider specifically refused to return as Chief Brody. The film was made for $18 million, twice the budget of Jaws, and filmed in 3-D, a move which contributed to significant problems with image quality when the movie was released on TV and home video. It was commercially successful with a gross approaching $90M but poorly received by critics. Later reviewers would argue between Jaws 3 and 1987’s Jaws: The Revenge as the worst in the franchise.

I remember being very aware of Jaws as a kid in the early to mid 1980s. (Sooner or later, I’m definitely going to do a post about the Jaws game.) To my recollection, I asked my family to rent the first movie not long after we finally got a TV and VCR, and I was duly awed all the way into adulthood. I have further recollections of seeing ads for airings of the sequels, particularly Jaws 3, on TV. However, I didn’t get around to watching it until four or five years ago. I went in interested by the science fiction elements as well as Matheson’s participation. On finally watching it, my immediate and strongest reaction was that it was quite inexplicably boring. I went back to it for this review, and quickly found it far more perplexing.

The central reality of the movie is that most of the human characters register as little more than generic and vaguely annoying, egregiously Gossett. As a further consequence, the central conflict is effectively between the shark and the theme park symbolically intruding in its realm. Viewed in these terms, the movie actually works well enough for a while, especially up to the capture of the first shark. The problem is that the shark can no longer simply lurk out of sight, and the effects have not improved nearly enough to make it believable or menacing in its own right. Matters are made far worse by heavily overlapping issues with optical effects and image quality. At least as seen in “2D”, the grain and quality of much of the film looks like it was shot for 1980s syndicated television rather than a big-budget studio production, while the underwater effects sequences literally look like they could have been done in the 1960s. Badly.

All these issues still don’t get to the most fundamental problem of the movie: Most of its length is a tug of war between the surreally weird and simply boring. The former moments come principally from the shark attack sequences, and still are very mixed. The most genuinely effective (and seriously considered for the “one scene”) are an early faceoff between a shark and the dolphins and the demise of the big game hunter, seen from inside the (big) shark’s mouth. But these are largely negated by the mainly optical sequences of the shark attacking the habitat, by far the worst of the movie, the series or quite possibly the decade. The most egregious absurdities comes in the finale, where the creature first appears stuck in the main window of the control room like Pooh after eating too much honey, then blows up into more pieces than the Death Star.

In the other column are scenes that are irritating or banal: Skinny dipping (with the “skinny” implied at best), and romantic meet-cutes, and dancing, and water skiing, and water skiing, and water skiing. And did I mention there’s a lot of water skiing? Then there’s extra “cringe” moments from Gossett, notably a line about segregation that by all indications is meant to be a joke, plus the incomprehensible participation of Sea World, which in light of later events is absolutely ghoulish. These are the scenes that mock the filmmakers and the viewer with the possibilities of what might have been if the comedy/ parody angle had been approved. Indeed, it is the precise lack of self-aware humor that haunts every aspect of the production like the ghosts from a native burial ground, holding back what could be “so bad it’s good” to just bad.

For the “one scene”, the one redeeming scene that stood out from the first viewing comes at the start of the final act, when the big shark attacks a Habitrail tunnel full of guests. The point of view starts and for the most part remains within the tunnel interior, a dramatically conventional choice that actually works within the limitations of the effects. It starts with a girl innocuously shouting that she sees a fish, then repeating a more ominous warning. As the group begins to react, the tunnel becomes simultaneously exposed and claustrophobic. Then the shark strikes, and within moments, water is pouring in. The group frantically rush for the exit, only to find the path already sealed off. Those who are furthest ahead find a place of at least temporary safety between two bulkheads, if the one behind can close fast enough. Like far too many of these moments, it’s a great scene that needed a far better movie.

The closing word here is on the rating, which I have given to very few movies and then mostly to ones I flagged very early (especially Inseminoid and Laserblast). With this one, I was ready to give it the lowest rating at the start but came very close to giving it at least one higher. The one thing that decided me is that the quality of the effects, and that is a true first. What should put this in perspective is that this movie cost not only twice as much as the first movie but about as much as Empire Strikes Back, and it quite simply looks like garbage. Never mind comparisons with Jaws, the Delaurentiis knockoff Orca looked better than this. Disney’s 20,000 Leagues Under The Sea looked better than this, almost 30 years earlier. Dark Star didn’t look much worse than this, and its effects included an actual beach ball. Of course, it must have been difficult to get everything right while filming in 3D with 1980s equipment, and then convert it back for VHS and DVD. But the whole point of the franchise was always that it doesn’t take the latest technology to tell a good story. That is what makes this film a total waste of talent as well as money, especially for Alves, who of all the people involved had the least excuse. It’s bad enough to put good talent in a bad movie, still worse to do so in a movie that could have been good, and that is how you get a movie with no right to exist.

For links, Screen Crush gives an insightful review of the movie and an overview of its reputation. As usual, the classifications and rating system are outlined in the feature Introduction.