Space 1979: The one where a cop hunts a generic Alien 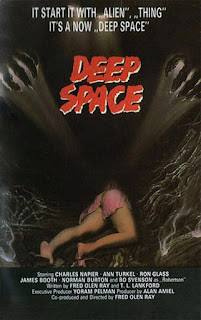 When I first posted my introduction for this feature, the most specific guideline I laid down for myself was to stick with movies that got a theatrical release. This proved to be easier to stick to than I expected, and I think it was in part because of the ca 1975-1985 timeframe I have focused on. In the early 1970s, there was a wave of well-made and influential movies made for network television, notably Duel which was actually modified for theatrical release, while the 1990s saw a boom in “direct to video” releases that has in a sense continued all the way up to the present. But in the late 1970s to mid-80s, even the sketchiest low-budget films (see Planet of Dinosaurs) would at least hit the independent theatre circuit. Still, I have thought on and off of doing at least a few video releases, and with this review I’m finally getting to one that is not just one of the best home video releases but one of the best knockoffs of its era.

Our story begins with a space capsule falling to Earth, monitored by a group of scientists and government military types, followed by the grisly deaths of a few waifs who wander onto the scene. We then meet a cop named McLemore, who actually gets put on leave for shooting a couple bad guys. He and his partner still investigates the scene and several more grisly deaths, including a forensic examiner killed in his own lab. He soon discovers that the deaths are the work of a monster created by the military as a biological weapon, which turns out to bear a striking resemblance to a certain franchise-building extraterrestrial. He also discovers that the creature has already hatched several insectoid offspring, one of which lunches his partner. To save the day and the Earth, he must find the creature and its young, with help from a lady cop, a psychic and government agent or two.

Deep Space was directed by Frank Olen Ray, an independent/ low-budget filmmaker who had pioneered the direct-to-video market with films such as Alien Dead and The Phantom Empire. The production company of record was Transworld Entertainment, a media conglomerate that included Tower Records. Unusually, the production cast several relatively well-known actors, including Charles Napier as McLemore and Julie Newmar as the (totally useless) psychic. Some sources give a date of 1987, but the actual release date is reported as April 1988 without serious dispute. Its creature design was undisputedly copied from Alien, with the suit construction being credited to a team that included Steve Patino, also credited for Critters and Predator (!). In more recent years, the movie has been available on DVD and Blu Ray, and was also available for streaming on Netflix. Unfortunately, the disc releases have become somewhat expensive, while streaming appears limited to unauthorized and uneven “bootleg” uploads.

For my personal story, I personally first watched this one on Netflix, along with The Falling. I’m sure I knew of the film beforehand, and may have seen it on video store shelves back in the day, though (unlike a few others featured or slated for review here) I’m not sure of that. I considered it for this feature very early, but hesitated when I very belatedly discovered it had been a direct-to-video release. I was more deterred by the relative difficulty of finding it, as well as further reservations after I got a look at the director’s work in The Phantom Empire, which among other things lifted effects shots directly from Planet of Dinosaurs. I finally watched a very iffy online video of the whole movie, with caution and moderate optimism.

What immediately impressed me was that the movie was not only well-made, but almost unaccountably believable. The creators clearly committed to the police-procedural angle, and while that certainly shouldn’t be the benchmark for realism then or now, it’s certainly at least as realistic as plenty of “straight” cop shows and movies from the same time. Even more importantly, it presents characters who are convincing and usually likeable, with even the generic government agents coming across as simply doing their best in an obviously volatile situation. What really stands out is the dialogue, which is exactly where far too many “serious” ‘80s movies turn either self-dating or entirely “cringey”. In fact, there are a lot of moments that could easily fall into either category or both, yet there is a consistent level of nuance that at times makes the movie feel a little too relevant. This is especially true of the aftermath of a police shooting early in the movie. Also noteworthy is a completely incongruous bit of dialogue where the two cops compare their guns and their manhood. On paper, it should be pure “cringe”, yet it feels more applicable and flat-out honest for circa 2016 than 1988.

Of course, the center of it all is the creature. This is where the movie actually falters a little. The main creature suit is obviously well-made, but it’s equally clear that many sequences were made around its known or likely limitations. Most of the time, the cameras alternate between the slow-moving or stationary creature and its victims, while a set of tentacles allow it to strike without coming into direct contact with the human characters until the film’s final scenes. This is made up for by clear, steady camerawork and the genuinely freakish design, which gives it the feel of something out of a comic book or video game rather than a live-action movie. (By comparison, choppy shots were the main thing that turned me off with Forbidden World.) The limitations of the budget become even more conspicuous with the facehugger-like larvae. Their construction is clunky and their motion is glaringly mechanical. Still, they can move at a very good clip, plus, they are clearly durable enough to stand up in a convincing scuffle with the cast members, which is more than can be said for plenty of better-looking practical-effects creatures.

That brings us to the “one scene”. Just a little past the hour mark, the cop chases a creature that killed his partner to a nearby house. He breaks in, and finds a terrified woman ready with a bat. Rather than identify himself, he simply says, “Where is it?” After tracking the creature to the kitchen, he chases it with the bat to a bedroom closet. He pulls out a frilly piece of clothing as tha damsel comes up behind him. He turns and warns her to leave, then tosses the unidentifiable garment back in the closet. Suddenly, it comes fluttering back out, just before the creature leaps out. When the hero misses again, the monster goes for the damsel, and he finally catches it as she struggles. The creature literally goes flying out a bedroom window. When the cop goes back outside to find it, the big surprise is that there is no surprise.

Overall, this movie gets my pick for the best Alien “knockoff” I have reviewed or considered, both by creature effects and design and overall production quality. I was all the more impressed to discover that it wasn’t made for theatrical release. What makes it truly interesting is that it is another movie that feels both too early and too late. The linear story-telling, filming and editing (which might themselves have been dictated by home-video production values) have an old-school feel, even for the 1980s. The character development, dialogue and themes rise to the standards of the time, with just enough touches to feel well ahead of it. It’s enough for me to give this a higher rating than otherwise better films, and this one was good to begin with. It’s worth a look, wherever you can find it, and it’s all the more worthwhile to make sure the powers that be know people still want to see it.

For links, the image credit goes to John's Horror Corner, which gives a more critical take I can respect. I also recommend a review at The Schlock Pit, posted just a few weeks before mine, which gives the best overview anyone's likely to get of the production history.