Space 1979: The one that was supposed to be the worst movie ever made 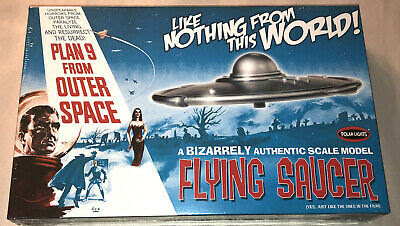 I have already written a fair amount about the genesis of this feature. With this installment, I’m going back to something I had in mind before I thought of it. For that reason, it’s outside the time frame and categories I laid out in the Introduction, but as I will show, its relevance would grow far beyond its own time, Without further ado, I introduce Plan 9 From Outer Space.

Our story begins with an introduction from Criwsell, who pronounces that we are all concerned with the future because that is where we will all spend the rest of out lives. It is further hinted that the film will show events covered up by various authorities. The next few scenes alternate between he death and burial of a grief-stricken old man and the arrival of flying saucers in the skies over major cities. The latter arc is standard for what was laid down in The Day The Earth Stood Still and Earth Vs. The Flying Saucers, except instead of Harryhausen’s stop-motion we have kit models with a tendency to wobble. We soon meet an army pilot convinced that aliens have arrived on Earth, and the aliens themselves, who appear reluctant to act against Earth but hint at a greater threat to the universe itself.  To advance their still uncertain goals, they are authorized to implement a new plan: Raise the dead! Can you prove it didn’t happen???

Plan 9 From Outer Space was made in late 1956 by the infamous Ed Wood under the original title “Grave Robbers From Outer Space”, with $60,000 provided mainly by a church. He famously arranged the film around test footage of Bela Lugosi, taken shortly before the legendary actor’s death. Its release was delayed until 1959. By available accounts, contemporary showings were mainly as “double bills” with other low-budget films. The movie had a long pre-VHS afterlife through late-night television showings. Its notoriety culminated in its listing as “worst movie ever made” in the 1980 book The Golden Turkey Awards by Michael and Harry Medved. The Medveds’ book appears to have been the immediate source of a rumor that the ships in the movie were paper plates, a story the authors attributed to one of Wood’s crew. In fact, the ships have been conclusively identified as a kit model originally made by Lindberg. (Do I need to mention I own one?...) The movie and other Wood films received further attention after the release of the 1994 Tim Burton film Ed Wood.

Like quite a few movies featured here, my experiences with this movie began long before I saw it. I first learned about it in The Golden Turkey Awards in the early 1990s, I heard a bit more during the release of Ed Wood, and I continued to see it mentioned in various places. During that time,  I saw it go through a kind of mirror-image arc to that of Logan’s Run: Where its infamy was once set in stone, skeptics and revisionists have turned discussions in other directions. It’s worth further note that this paradigm shift has occurred not because of any groundswell of new appreciation, but simply because more people are recognizing how many other astonishingly bad films made at the time had fallen into obscurity (though the works of Wood remain very much in the running).

With all that background in place, I will confess that I didn’t get to watching Plan 9 until just a month or two before I posted my MessageFrom Space review. Fittingly, I watched it with free streaming while I was assembling and testing a lava lamp. My immediate reaction was that I had seen movies that were much worse, though I had to think a bit for which ones. What took me entirely by surprise was how tight and focused the movie is in telling its story. I’ve seen any number of movies well under 90 minutes that still got padded out with filler, especially from the 1970s. (The Day Time Ended was an egregious example that kind of got away with it.) By comparison, almost every scene in Plan 9 advances the narrative in some way. It’s certainly debatable whether this was because of Wood’s skill or simply because he didn’t have the money to dither around, but either way, it’s a comparative triumph for “old school” storytelling.

What makes the film most interesting is the blend of science fiction and horror, which would probably have tipped my hand if I had gotten to the latter genre before this review. The flying saucers freely intermix with the graveyard shenanigans of the undead, led very effectively by Tor Johnson and Vampira, and somehow, it works, despite some of the film’s most notorious gaffes. This leads directly to a bizarre sequence where the alien commander Eros loses control of the enormous revenant played by Johnson in the presence of his immediate superior. It is tempting to take the subsequent order to proceed with their plan as a malicious joke by their leader. What gets uncanny is that the briefly outlined plan anticipates the Romero-style “zombie apocalypse”. Of course, Ed Wood could never have gotten the budget for that, so we instead get a showdown in the saucer as a finale.

That brings us to the “one scene”, one more thing I knew of long before I saw the movie. Eros allows a party of military and police officers to enter the ship, though he tells his second-in-command that they will have to be killed. He then freely stares down the armed humans long enough to reveal the reason for his mission: Humans are believed to be close to developing “solaronite”, a weapon so uselessly overpowered it could destroy the universe.  In fact, his description of its capabilities not only puts the aliens in the right but would completely justify exterminating humanity without any warning whatsoever. (The details make a very small amount of sense based on what we now know about solar emissions, but that’s clearly beside the point.) In the movie’s most surreal moment, the “hero” actually tries to argue that humans have a right to possess the weapon, and it’s not at all clear if the viewer is expected to take his side. That’s enough for Eros to snap entirely, end in the process show both his anger and total contempt toward Earth.

All of this brings us back to the real questions readers (if any) might ask: Am I really defending this movie? And if so, why am I doing it in a feature dedicated to movies from decades later? It should be clear that my praise is a little bit facetious. By any objective standard, the movie is just as bad as people have said it is, regardless of whether it’s that much worse than other films made then or since. A determined apologist could easily counter that the most obvious problems are caused by the budget (if anything high by Wood’s standards), but that can be countered by the comparable or lower budgets of other clearly better movies, including the $114K price of Night of the Living Dead only a decade after its release. A better defense is that Wood really meant for this to be funny, which I personally am convinced of up to a point. The one thing I will stand by is the clarity and purity of the story, which at least ensured that the film doesn’t actively annoy me.

For the second question, the simple fact is that this movie was more relevant from the 1970s onward than it ever could have been at the time it was made. It was only then that a cultural niche emerged for the viewing, listing and reviewing “bad” movies for their own sake. In further hindsight, it rose and to an extent fell on the expanding availability of home media, something I have both factored in and tried to cover in the course of this feature. In my own experiences, even relatively recent, big-budget movies like Krull were expensive if not difficult to obtain well into the current millennium. In that environment, a chance to watch a non-budget oldie like Plan 9 was a novelty indeed. But in the era of online stores and streaming, the only reasons you can’t order or view a film in minutes are if it’s entirely lost (the fate of several films I intend to cover sooner or later) or because one or more jackasses tied up the rights in court. As already noted, the curve only moved because Plan 9 was no longer viewed in isolation.

Yet, there is one more thing that should give us pause. If Plan 9 is truly considered as a social satire, and not just intentional or unintentional comedy, it becomes almost terrifyingly prescient. Technology too deadly to be used without mutual self-destruction. A self-styled superior mind who has a point but can’t make it without insulting his audience. Authority figures who accept what they see but won’t admit it to those they are responsible to protect. A war to stop the use of a weapon that might or might not exist. These are the true absurdities of Ed Wood, and we need to stop laughing.

For links, I recommend the Cinemassacre review for a semi-serious revisionist take on the movie. Another interesting take can be found at The Dissolve .  The image is taken from online listings under the expectation of "fair use"; the tale of my own collection will wait for another day.