The one with a Beatle and a football player as cavemen 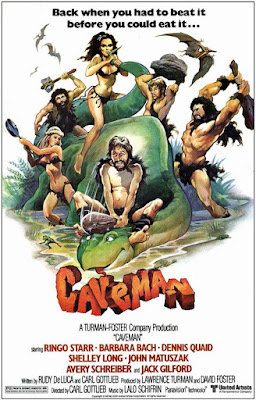 For the end of the parody arc, I’ve finally worked my way to one of the very first films I thought of covering for this feature. It’s also one of the movies I personally like the most, and if there’s one thing that should be clear by now, it’s that this makes an honest review very, very hard. Since I first thought of this feature, there have been times I was ready to make it one of my first reviews and others when I was ready to drop it entirely. Without further hand-wringing, I introduce Caveman.

Our story begins in a time introduced as “One Zillion BC”, where tribes of hunter-gatherers share the Earth with various dinosaurian monsters. In short order, we meet Atuk, a caveman who shows empathy and concern when an attack by one of the beasts leaves several of the tribe dead and injured, and Tonda, who casually plows through anyone in his way. We also learn that Atuk is pitifully obsessed with Tonda’s mate, Lana, and not above trying to flatly abduct her for a chance to woo her. When his scheme goes disastrously awry, Tonda drives him from the tribe. Accompanied by his injured friend Lar, Atuk begins to gather his own band of outcasts and misfits, including a woman named Tala who fancies him and her blind father (figure?) Gog. But they cannot seem to avoid Tonda and his old tribe, and Atuk is not ready to give up on Lana. When a happenstance accident puts Lana in his hands, Tonda prepares a swift retaliation with help from Tala, forcing the outcasts to gather for war.

Caveman was directed and co-written by Carl Gottlieb, whose previous work included a writer’s credit for Jaws. The production parodied a modest wave of “caveman” movies in the 1960s and 1970s, influenced by the 1966 remake of One Million BC and prehistoric scenes in 2001. Many of these were foreign films, such as When Dinosaurs Ruled the Earth and When Women Had Tails, potentially contributing to perceptions of Caveman as a parody without a “serious” source during its US release. Ringo Starr was cast as Atuk, with his future spouse Barbara Bach as Lana, Shelley Long as Tala, and NFL star John Matuszak as Tonda. The supporting cast included Dennis Quaid (previously sighted in Innerspace and Jaws 3) as Lar, Avery Schreiber of Galaxina as Tonda’s ally Ock, and Evan C. Kim as the only character to speak a certain amount of English. Stop-motion models and effects were provided mainly by Jim Danforth (previously seen slumming in Planet of Dinosaurs), who left the production before completion. The finished film was released by United Artists, with a $6.5 million budget and an estimated $15M box office. Contemporary promotional materials included a printed lexicon of the caveman language used for the vast majority of the film’s dialogue. Ironically, the European caveman wave would continue with films such as Quest For Fire, also released in 1981.

My experiences with this movie start fairly late, when I ordered it online around 2007. I loved it as a tribute to older dinosaur movies, especially the Harryhausen version of One Million BC. It further impressed me in its own right, obviously for the stop-motion effects, also for the cast, good character development, great music and a sense of general high-spirited silliness that consistently transcends any individual gag. I recognized from the beginning that there were certain things that went “too far” from the standpoint of more modern tastes, but it didn’t detract from what was good. I watched it reasonably regularly in the following years, including a day when I was too sick to go out for an interview for what became my first real job. It had been a little while since I watched it when I thought of reviewing it for this feature. I watched it again quite early, and then… Aw, dammit.

From here, I’ll start by backing up to what’s good. As already outlined, its use of effects, sight gags and physical comedy are top notch, to the point that the movie as a whole starts to feel just uniformly okay. The performances from Starr and Matuszak greatly improve an already promising movie; it’s all the more impressive that they hold their own in the midst of a cast of quite accomplished actors. Then the one thing that’s easy to overlook is that there are serious and even poignant moments. The overall result is a fundamentally convincing picture of “stone age” life. The struggle for survival crowds out any sense of good against “bad”. Tonda in particular is crude and mean, but rarely deliberately cruel. Again, the movie is further boosted by the music from Lalo Schifrin, whose credits included the Mission: Impossible theme and Dirty Harry. The high point of the score and perhaps the movie is a sequence of inspired insanity when Atuk’s band sings the theme, accompanied with improvised instruments.

For what’s bad, the unavoidable problem is Atuk’s schemes toward Lana, which add a whole extra layer of cringe to a movie that already has plenty of crude humor. I can charitably interpret what is shown as in line with semi-benign practices of the native American tribes, which ideally ended with either consensual marriage or the return of the woman for a ransom. Even then, his methods are extreme, to put it very kindly, leading to one early and extremely uncomfortable sequence. What makes things even more awkward is that none of his new band challenges his behavior, but on the contrary enable his continued aggressions up to the very end. The implied contest of Lana and Tala just gives one more layer of discomfort. Lana is a transparent opportunist, but her actions even more than Tonda’s are dictated by her circumstances. By comparison, Tala is introverted at best and passive-aggressive at worst. One can find a redemption arc in Atuk’s eventual choices, but like much of the movie, it’s a pointedly weak as a moral.

For the “one scene”, I could never say no to a stop-motion dinosaur scene. Around the middle of the movie, Atuk’s tribe is stalked by a tyrannosaur we have already met several times. It’s one of the finest stop-motion creations, animated by Randall W. Cook with Danforth’s model. It looks pitifully old, complete with unfocused rheumy eyes and a meager handful of teeth, but still clearly dangerous. Absurdly, it tries to sneak up on Atuk at the rear, and even more absurdly, it nearly succeeds. When the dino smacks its chops, the band belatedly realizes the danger and runs for it, leaving Tala behind. Atuk turns and runs to the rescue, armed only with a bush full of very potent fruit. The beast munches the plant whole, and promptly becomes happily tipsy, a little too close to the cliff.

Of all the movies to turn up here, this movie is perhaps the one that did the most to put itself on the wrong side of history (at least apart from Space Mutiny). To me, what it has always felt like is a good 1970s (or even '60s) movie crossed with a bad 1980s movie. Even as I wrote this review, I have been conflicted about how to rate it. Before getting back to it, I was ready to consider giving it the highest rating; immediately after, I despaired whether I could justify giving it a 3/5. I rate it as I have for what it does right, and especially for what it has meant to me. With that, I for one can finally move on.

For links, I recommend  a Cinemassacre video that covers a number of European caveman movies, all in the course of discussing a clip featured in Troll 2. As usual, see the Introduction for the ratings and classification system.