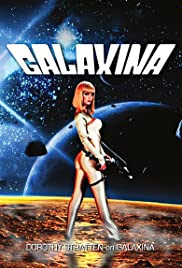 With this review, I am continuing a minor arc of sci fi comedies/ parodies, including a few I had in mind very early. Back when I first wrote theI ntroduction for this feature, parodies posed some of my most difficult choices both in definitions and material. In most cases, these were of limited interest, especially if they came from “mainstream” creators; that was my assessment of Spaceballs in particular. The ones I definitely wanted to cover were a few that were early and innovative enough to have influenced other in-genre movies, especially Dark Star. Others that got on my radar were usually ones that had comedic and/ or satirical elements but kept the sci fi “straight”, like Night ofthe Creeps. That still left a few that I genuinely wasn’t sure what to do with. For this review, I’m finally covering the most egregious of these entries, a very odd little movie called Galaxina.

Our story starts with a ship flying through space that’s longer than usual and distinctly pink. It’s introduced as the police cruiser Infinity, and in short order we meet the motley crew, including captain Cornelius Butt, the lonely Sgt.Thor and the eponymous Galaxina, the ship’s android pilot. As the mishaps and misadventures continue, we meet a mysterious alien from beyond the galaxy that bests the ship in combat, another alien locked in the ship’s brig that eats rocks hurled at it by the captain, and a creature of uncertain intelligence that hatches from an egg the captain tries to eat. Meanwhile, a romance blossoms between Thor and Galaxina, hindered by her inability to speak plus ill-timed power surges. When the crew is sent on a 27-year trip in suspended animation to catch a fugitive with a powerful artifact, Galaxina tries to modify herself into a more suitable partner. Then the upgraded android must venture out into a hostile frontier planet to recover the artifact, with the crew’s old adversary and several more wild cards as competition.

Galaxina was written and directed by William Sachs, an independent sci fi/ horror film maker whose previous work included the 1977 film The Incredible Melting Man (which I’m definitely getting to at some point, though it probably won’t be here). Playboy model Dorothy Stratten was cast and prominently billed as Galaxina, in her only starring film role before her murder shortly after the film’s mid-1980 release. Other cast included veteran comic actor Avery Schreiber as the captain and Stephen Macht as Thor. Sachs complained that the film was significantly changed by budget limitations and a reduced shooting schedule that prevented the shooting of certain scenes. The film was distributed by Crown International Pictures, and received an R rating from the MPAA. By all accounts, contemporary reception was mixed at best. The film has remained available for streaming in recent years, though at the time of this writing only itunes offers it for direct purchase.

As alluded above, I had seen this movie and thought of it very early, but delayed getting to it mainly because of strangeness concerning availability. With a fresh viewing for a frame of reference, I can easily say that this is one of the oddest films I have covered, far more so than I can easily convey by describing it in cold blood. Indeed, the single most striking thing about it is how pervasively and almost unsettlingly tame it is. The vast majority of it would fall well within “PG-13” for a modern movie, or even “Seventies PG” outside of some brief profanity. By my reckoning, the fact that it doesn’t push the envelope for adult content is the chief reason it remains watchable and even charming.

This brings us to the upside, the science fiction here is thoughtful, well-realized and generally good. The romance between Galaxina and Thor remains an intriguing and forward-thinking take on human-AI relations, with several of the film’s better gags and a few genuinely moving moments thrown in. The crew are also well-realized, on par with the space truckers of Alien (not to mention Dark Star) without being beholden to it, while the ship for all its willfully suggestive design makes a fair amount of sense. The on-planet locales offer a reasonably clever reductio ad absurdum of the “space Western” subgenre, with such additions as a consumer-product cult and the wicked double meaning of a “human restaurant”. One more extra twist is the use of advertisements as part of the world building, a device brought to its apex in Robocop. They might not be on the level of that film, or especially good in themselves, but they give an extra level of irreverent realism to the proceedings.

The downside is that the film is simply and unaccountably unfunny. To begin with, it suffers acutely from a quite common tendency of vintage sci fi comedies to be more amusing between the jokes, but that’s a survivable flaw. The humor of the film holds up fairly well as long as it sticks to sight gags, which give its better moments the feel of a sci fi version of Airplane. Then there are some genuinely laugh-out-loud lines from Schreiber in particular, such as the fateful comment, “If people worried about where eggs came from, they would never have eaten them.” But for every gag that works, there are several more “jokes” that start out awkward and get painfully drawn out from there. What gets rather uncanny is that some of these gags might well have been relevant and even influential in their own time but merely draw a déjà vu sense of familiarity in hindsight. The most jarring example ia a musical flourish that occurs every time the artifact is mentioned, openly commented on by the cast. Even more unsettling is a dialogue bit about whiplash and lawsuits that would be self-dating in a 1990s movie.

For the “one scene”, a single sequence stands out simply for living up to the film’s potential. As the first act ends, the crew go to a house of adult entertainment, blatantly styled on an Old West saloon. The workers and patrons include plenty of sight gags and some genuinely good practical-effects creatures. The captain openly comments on them with some decent zingers. As they settle in, they become more friendly, without going much further than that. The scene is framed by a shot that reveals Galaxina watching sternly from the ship, with an eye on Thor in particular. But then back up, and the film quite pointedly shows a woman who has one more endowment than usual. It’s exactly the same gag shown graphically in Total Recall, and nobody’s going to convince me it’s a coincidence that this is the second time I’ve referenced the works of Paul Verhoeven!

This is a movie I would love to have hailed as a neglected gem.  The reality is that it is still worth watching, and certainly not as disappointing as plenty of far more successful films of the era. But the fact that it has not been elevated to newfound fame must be attributed not to being overlooked, but on the contrary to remaining just accessible enough for the discerning to seek it out. The one factor truly in its favor is that, like all comedy, it was intended for its own time, and like all movies before the VHS age, nobody involved would have expected it to remain under scrutiny ten years later, let alone 40. From the standpoint of history, it is what it probably always was: Experimental, awkward, intermittently inspired, and ultimately not that good.