Space 1979: The one where euthanasia is practiced at age 30 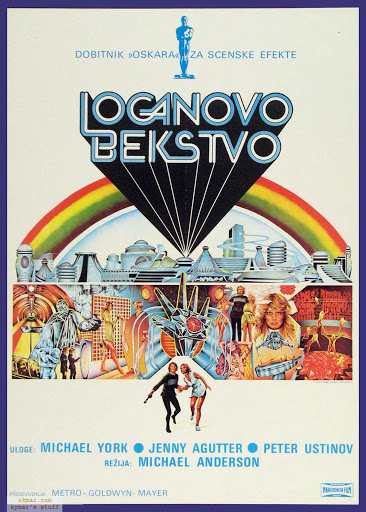 In the course of this feature, I have already featured several films that were suggested to me when I first proposed my idea. During that process, there were a very few films where I got pushback in the other direction, particularly when I was explaining and further developing my idea of “runnerups”. This was usually not because anyone thought they weren’t reviewing, but because they were and are influential enough that some didn’t like having them presented as “second” to other films. The big one was Dark Star, which I finally used as an example of other categories and subcategories, followed by Westworld, which I talked myself out of. With this review, I’m finally getting around to one more that was controversial but in my mind from the beginning, in part because it took this long before I was in the right mood to take a look at it.

Our story begins with exterior shots of a futuristic cityscape sitting in the midst of a vast wilderness, and it’s already clear that this is not a standard urban utopia. We then meet the main character Logan and his associate Francis, who speak of themselves as “sandmen” while looking in on a nursery where every infant has the same crystalline implant on their palm. In the course of a little more exposition, we learn that they are the hatchet men of the insular city-state, tasked with hunting down and summarily executing anyone who passes the ripe old age of 30. But the unseen rulers are concerned there are more people missing from the city than the sandmen have accounted for. Logan accepts a special mission to find the fugitives’ way out of the city and see if they have perished or found a sanctuary on the outside. A series of improbable adventures follow, and the most difficult trial awaits when he tries to come back home.

Logan’s Run was produced by MGM very loosely based on a novel by William F. Nolan. The project was originally helmed by the legendary George Pal, before Saul David took over in 1974. Michael York was cast as Logan, with Richard Jordan as Francis and Jenny Agutter of American Werewolf In London as the romantic interest Jessica. The supporting cast included thespian Peter Ustinov, previously introduced to younger audiences as Prince John in Disney’s Robin Hood, as an old man found by the fugitives, and Rocoe Lee Browne as the voice of the renegade robot Box. Some scenes were censored to avoid an R rating in the US, though several scenes of nudity remained in the PG-rated theatrical release. The production was completed for up to $9M and made $25M in the United States, making one of the most expensive and commercially successful science fiction movies between 2001 and Star Wars. Fatefully, MGM let go of the sequel rights to Westworld in favor of Logan’s Run, allowing AIP to make Futureworld.

My own history with this movie began well before I saw it. In the 1990s, if anyone got to talking about 1970s science fiction, the two that would always be mentioned were Star Wars and Logan’s Run. I finally rented it on video when I was finishing high school, around the time Phantom Menace came out. From what I remember, I liked it well enough, but it didn’t make a big impression compared to its reputation. I didn’t think to look it up again until about a year ago, when I had to buy it because it was no longer available from Netflix disk rentals. In hindsight, that alone was the big alarm bell how badly this one had aged.

The strongest impression I get watching this movie when I bought it and again for this review is awkward and self-dated. The best frame of reference is Zardoz, the one movie I might give a better rating if I get around to taking this feature beyond the blog, and that’s a very bad sign at the start. In those terms, it’s not nearly as pretentious or obtuse, but fails to get anywhere near the sheer insanity that made that movie potentially tolerable. Moreover, where Zardoz builds up to a kind of internal logic, this movie pretty much admits its premise is nonsense at the start. Apart from anything else, there’s no way the city could be overcrowded enough to justify the sandmen’s function, to the point that most of their victims are gunned down in empty corridors. And regardless of what we see (or don’t) onscreen, it doesn’t take an anthropologist or a biologist to see that this is going to backfire at some point. If people expect to be dead by age 30, what’s to stop them from becoming grandparents at 28?

Anything that works in this movie comes from the opening scenes and the middle act. The city itself is well though-out and impressively executed. That in turn sets up for an effective transition when the characters get outside. The reactions, especially from Agutter, range convincingly between wonder, fear and disgust as they go through the wilderness to the ruins of earlier civilization. The most genuinely entertaining moments come when the city dwellers meet Ustinov and see the effects of old age for the first time. That is followed well enough by an intense and unsettling fight scene where the artifacts of the bygone world become literal and symbolic weapons in the hands of those who know nothing of their origin and meaning. These scenes make the finale even more disappointing, as the city-state is overthrown for no better reason than that the filmmakers had to do something to end the movie.

For the “one scene”, my choice was always going to be the appearance of Box. It’s the scene that marks the symbolic break from the order of the city-state to the wilder world beyond, and the movie’s one all too brief moment of the inspired insanity that marked pre-Star Wars Seventies science fiction movies. After following an escape route revealed by other would-be fugitives (and making a completely unnecessary wardrobe change), Logan and Jessica are suddenly greeted by a very jovial robot. The creation looks like something that could have been cut from Dark Star as too cheap and silly, seemingly made from tin foil, vacuum hoses and for some reason a number of mirrors, with a further tendency to wobble as it moves along. It’s all more than made up for by Browne’s superbly unbalanced delivery. His enthusiasm does not diminish as he reveals the fate of the other fugitives to cross his path, and then breaks out his weapons. The ensuing fight is short but effectively paced, with one surreal final line from the bot as his surroundings collapse.

Coming back around to my personal judgment, this is a movie that I would never have considered for a series like this if I had had the idea 20 or even 10 years ago. Back then, its reputation would have seemed beyond question or doubt (the surest sign being a parody on The Simpsons). But enough time has passed for its fame to fade enough to show its faults. What makes things entirely depressing for me is that this was released literally at the same time George Lucas and Fox were making Star Wars, on an only slightly larger $11M budget. With this much genuinely promising material, couldn’t someone have  just stopped and thought of how to do this a little bit better? It may not be as irritating as Zardoz, as offensive as Space Mutiny or as flat-out terrible as Inseminoid, but this is the movie that is truly the emperor with no clothes.

For links, the image credit goes to Space 1970 (again). As usual, see the Introduction for an overview of the feature, classifications and rating system.