Space 1979 Threequel Trilogy: The one they made to bring a character back to life 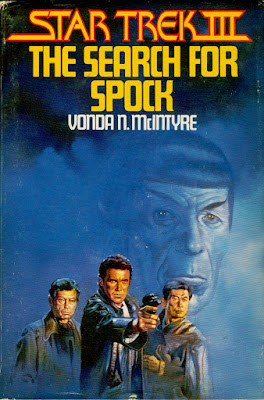 In considering choices for this feature, my hardest choices involved the Star Trek franchise. I grew up as an obsessive-compulsive Trekkie, whether it was original, Next Generation or Deep Space 9, and of course I saw most of the movies. The cinematic Trek universe is already famous for both some of the best and some of the most notorious of 1980s sci fi, including one I was definitely considering from the beginning. Up till now, I have held my fire, simply because there isn’t much of anything here that is neglected or in need of evaluation. Whether they’re considered the best like Wrath of Kahn or the worst like The Final Frontier and for that matter Star Trek: The Motion Picture, the Trek fandom has made sure that none of the franchise’s movies have fallen into true obscurity. The one I finally settled on as representative for all is the only one that I come closest to actively hating.

Our story begins with a recap of the dramatic finale of the last installment, when Spock sacrificed himself to save the Enterprise from the blast of the Genesis device. Kirk and the crew return to starbase, to discover that the damaged ship is to be decommissioned and scrapped. Meanwhile, Dr. McCoy is acting strangely. Kirk soon realizes that Spock’s mind lives on sharing the doctor’s body. To reunite Spock’s mind and body, they must commandeer the Enterprise for a trip back to the planet at the epicenter of the Genesis effect. Add in Kirk’s estranged son, mutated creatures, a renegade Klingon and a self-destructing planet, and you have… a movie?

Star Trek 3 was put into production immediately after the commercial and critical success of Star Trek 2: Wrath of Kahn. The project was written and produced by Harve Bennett, with the bold choice of Leonard Nimoy as director. Trek 2 director Nicholas Meyer departed, reportedly in disagreement with the decision to resurrect Spock, though he would return as co-writer of Star Trek 4 and direct again in Trek 6. Christopher Lloyd was cast as the villain, Klingon commander Kruge, a year before he would first appear as Doc Brown in Back to the Future. The movie was a box office success, and laid the way for three more franchise films with the original series cast.

When I was a kid, I went to Star Trek 4 through 6 in the theatres and to my recollection liked them all, including 5. I didn’t get to any of the earlier films until a bit later, and I really didn’t “get” them for quite a while after that. (I had no idea what the original film was like until college.) Back then, it was already an inside joke that the “even” ones were good and the “odd” ones were… less good. Star Trek 3 was usually supposed to be the exception. In further hindsight, its real position was simply one of maximum cover. It was between the two most popular movies of the franchise, and on either side of them were by far the most infamous of them all. Over time, I came to understand and appreciate the other movies better, but  3 was the one I never got around to, leaving me with only the recollections of a single rental in the early 1990s. Even from that, I started to become skeptical whether it was really any better than the more criticized films of the franchise.

I finally got around to viewing all the “odd” films in one go when I bought the franchise Blu Ray set a few years back. With that frame of reference, my impression of Search For Spock remained just one big pile of “meh”. It might not have the legendary problems that afflicted “Trek 1” (the one I really had in mind from the start) and Final Frontier, but this has more to do with a lack of ambition than its own merits. Inevitably, there are good moments, notably a lively heist-movie style sequence when the crew take the Enterprise out of space dock, but they are less interesting and even less satisfying than the weird and awkward moments of other movies in the series. On the other side of the balance are the calculated “dramatic” moments that simply feel checked off, with the exception of a tense scene when the Klingons board the Enterprise. This movie is also the one that sets off an uncanny feeling that has consistently hindered my appreciation of the franchise’s movies: It feels not simply less than the sum of its parts put like a synopsis of them, as if it was a synopsis of the movie rather than the story itself. Maybe this is just me, and I don’t pretend to be able to explain why it feels this way, but it’s my honest feeling.

When I viewed it for this post, what stood out all the more is how much flat-out weirdness is stuffed into the movie. Yet, even these simply sink into vaguely pleasant mediocrity. The most surreal element is the casting of Lloyd, who was already somewhat typecast as a comedic actor. Seeing him as a villain in generally “serious” production should have been the movie’s most intriguing twist, akin to Leslie Nielsen’s turn in Creepshow. His performance and character certainly contributes a number of the film’s better moments, and for me are a major reason the movie is watchable. But what we don’t know about him (especially his real affiliations and loyalties within the Klingon Empire) is ultimately more interesting than anything we learn onscreen, and the story does very little to turn the mystery to its own advantage. Like far to many things, his presence is an isolated oddity.

For the “one scene”, the one part of the movie that rises to its potential is a scene where possessed McCoy tries to hire his own ship. He wanders into what looks like the uptown version of the Mos Eisley cantina in hopes of hiring a ship to the Genesis planet. He alternately talks like himself and like Spock, in a genuinely impressive display of Deforest Kelley’s acting talent. When a disreputable captain arrives, he quickly grows impatient with pleasantries and euphemisms, declaring, “How can you get a permit to do a damned illegal thing?” Then, when one of the Federation’s officials tries to intervene, the doctor actually tries the Vulcan nerve pinch, and is amusingly surprised by the result.

It’s a great scene, but it’s the one that irritates me most. It may be played for laughs, but McCoy possessed by Spock actually has a better plan than anyone else. So what was stopping the filmmakers from going through with it? Replace the Enterprise (which they had to do in the next movie anyway) with a Millennium Falcon-style tramp freighter. Make it a race with the Klingons and the Federation’s well-meaning authorities, perhaps including Kirk himself (shades of “City on the Edge of Forever”!). Focus on the journey to the quarantined planet instead of the skullduggery at the end. It might not have been a better direction, but it would have been different, which is what is truly lacking in this movie.

In the proverbial cold light of day, that the common denominator in the “odd” films was studio interference. Star Trek: The Motion Picture was rushed to theaters virtually unfinished by suits who had never viewed it as more than a Star Wars cash-in, while the whole history of The Final Frontier amounted to William Shatner being pushed down the stairs. By comparison, The Search For Spock was the one that stands out as a flat out cash grab, and that remains my strongest issue with it. In taking that course, the production not only took the easiest path to more money and more movies, but avoided any fundamental change in the dynamics of the series. What’s most disheartening is that apart from Meyer’s symbolic departure, there were no signs of opposition to the plan, conspicuously from Nimoy. Once this train started, it was going to the station whether or not it had any brakes. I might not be able to justify giving it a rating lower than I have (especially after the movies I’ve gone easy on), but this is one time when merely mediocre is far worse than actually “bad”.

For links, the image credit goes to The Geeky Nerfherder. As usual, see the feature Introduction for the rating system and classification system. More to come, and I can't say I'm looking forward to it.