Space 1979: The one where a girl gets eaten by a piano 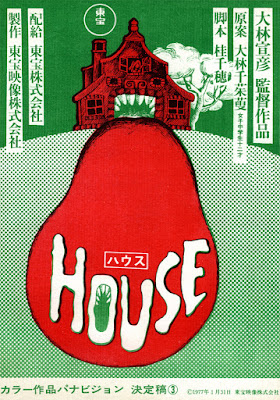 I’ve previously acknowledged that there’s a lot of random in what I review for this feature. The flipside to that is that I have viewed plenty of movies that people might expect to fit in but ended up set aside. Some have simply stayed on the “maybe” list, while a fair number have been reviewed or lined up for other features. Then once in a while, I have run across something that I just couldn’t work with. They didn’t “fit” the idea of the feature, or I couldn’t give them an appropriate classification or rating, or they had themes and content I preferred to avoid. Sometimes, they simply didn’t connect with me, or else I couldn’t find anything to say or comment on that would make it relevant to the genre. Consider this review an example of what happens when I get a movie that shouldn’t work at all, written in no small part because this is one time I’m not ready to walk away with nothing. With that ringing endorsement, I present House… the other one.

Our story begins with a group of girls chattering about school, boys and anything else that crosses their minds. One of the girls becomes distressed when she learns her father is remarrying, and goes on a trip to a beloved aunt’s house to ease the adjustment. She invites the rest of her friends to come with her, in the process recounting the backstory of her aunt’s beloved, who went to war and never returned. After a trip by train portrayed with psychedelic animation for some reason, they meet the aunt, a silver-haired charmer who spends much of her time in a wheel chair she doesn’t seem to need. Soon, the girls begin seeing strange things, and one of their number disappears. As the weird visions continue, the remaining girls find their numbers dwindling as the house and the objects inside appear to come to life to attack, kill and even devour them. Yet, the victims of the house, including the niece, continue to appear as spectral figures or seemingly corporeal and quite lively dismembered body parts, usually to warn them that they are next. Will any of them survive, or will they remain… forever?

House was a production of Toho Studios, produced and directed by avant garde film maker Nobuhiko Obayashi. Per the lore (ie Wikipedia), Obayashi was originally offered the studio’s backing for a Jaws knockoff. He instead developed a supernatural/ psychological horror storyline, with many shots and scenes based on input from his own pre-teen daughter. The movie was filmed over 2 months in 1977, with actual teenage actresses in many of the leading roles. The film made extensive use of animation as well as optical special effects. It was successful in Japan but did not receive a contemporary US release; as a further result, it does not appear to have an English “dub”. In 2009, Janus Films gave the movie a limited United States run. The following year, it was released on DVD and Blu Ray as part of the Criterion Collection.

I only caught wind of this one quite recently, after an uncertain amount of time right at the edge of my awareness. I can particularly recall seeing it listed for sale or rental under fantasy and horror films, I think even among lists of films “recommended” for me. At first, I assumed I was seeing listings for the 1985 American film, though the weird artwork was clearly different from anything I had seen for it. I realized I had something else when I noticed the year, and looked up a few videos about it online. It was clear from preliminary research that this had everything against it in terms of the minimum guidelines for this feature: It wasn’t in the sci fi genre, it was a foreign language film with no contemporary US theatrical release, and it was debatable in my mind whether it qualified as live-action. Still, I’d bent the rules often enough that the most represented year for sci fi from 1975-1985 is 1986, so I dived in.

The most important thing to understand about that movie is that describing the experience of watching it is more useful and certainly easier than trying to explain anything on screen. I personally went through it with several lengthy pauses, which may be the best way to break up the weird. I, the guy who waited for an authorized release of Shanks, found the movie literally jaw-droppingly weird within the first 5-10 minutes, which is before much of anything happens except the title animation. This is about the point where I quit Howard the Duck. By the half-hour mark, this is beyond any frame of reference outside animation, which is entirely appropriate since many of the sequences are either animated or look like stop-motion with magazine cutouts. As things proceed, the movie blows past The Phantom Tollbooth, pulls even with the Transformers movie, and then guns for Jan Svankmajer territory. (If you ever saw a stop-motion rabbit made from an actual rabbit, that is the guy…)

The one thing worth adding about the events in the story is that the movie’s presentation achieves the opposite of suspension of disbelief. The look and style is like what would happen if The Shining was made by the creators of South Park, complete with cutout photos, so far beyond reality that the horror becomes a sort of perverse naivete. (It’s of some further interest that Kubrick was known to follow Japanese cinema, an angle I previously ran across in the legwork for The Green Slime.) The hallucinogenic nature of the animation and effects keep the movie well within “’70s PG”, except for some very cringey nudity. A further contributing factor is that the movie repeatedly uses the same bizarre animation and effects even when nothing is at stake, as well as incongruously bubbly music and several completely irrelevant slapstick sequences. As the movie speeds through the final act, there are several highly graphic deaths (egregiously an attack by a piano come to life), but by then, it’s easy to assume none of what we see is reality even in this movie’s world. It’s only when the departed fail to reappear that the viewer is forced to consider that the characters’ deaths are at least a permanent change in their condition.

For the “one scene”, the only one I find worth the trouble of detailed commentary is a very early scene that comes close to portraying a real situation. Because of the timing of this review, I am piecing this together without a repeat viewing. A girl returns home, to be met by her father, who announces he has an important announcement, well before he gets to it.  He finally explains that he is remarrying, and promptly introduces her new “mother” as she walks in. Things get especially awkward when he tries the pitch that the new lady will help with the sewing and housework the girl has apparently been doing, all while pointedly avoiding any hint of sexuality. The girl clearly isn’t going for it, and her reactions do legitimately foreshadow what’s ahead. In the movie as a whole, it’s like the road sign for the last exit to anything like reality.

Needless to say, a movie as odd as this one is the kind where I prefer not to take sides by rating it. Thus, I finally brought in the “unrated” category I previously introduced for the Revenant Review. The most favorable thing I can say is that it is a “haunted house” movie that really does capture the ambiguity and unreality that movies in the subgenre usually chase after, and it didn’t actively annoy me nearly as much as a lot of more polished films. It doesn’t hurt that it came ahead of quite a few better-known western films, including The Shining, which I won’t pretend to consider a worse film but certainly makes for intriguing comparisons. Whether I would recommend it is where I will politely decline to comment. Still, if what I’ve written makes it sound interesting to you, go for it.