Space 1979 Phase 2: The one with Freddy Kreuger and My Favorite Martian 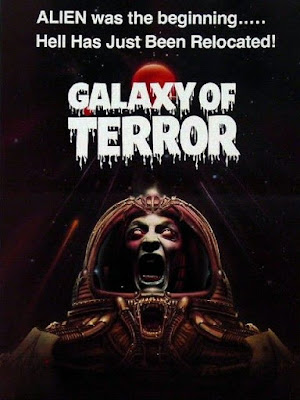 I’ve now been doing this feature long enough to pass what I originally considered a possible end point. To mark the transition, I’ve been considering some movies I either put off or didn’t find suitable previously. It was only fitting that the first up would be the one movie everyone was probably expecting me to do all along, but one which I was never convinced belongs here and definitely was skittish about watching again. So here is Galaxy of Terror, usually considered one of the most infamous knockoffs in history… but as in the movie itself, not all is as it seems.

Our story begins with a standard setup of an ill-fated expedition whose last member is done in by an unseen force. Then in a real twist, we meet a mysterious figure called the Master, seemingly something between a mystic and a monarch, who takes enough interest to send a second team. We then meet a mixed bag of a crew with more than its share of paranoid military types, including the survivor of another ill-fated expedition. Our established protagonist is Cabren, second or third in command, supported by his lady love Alluma, the solemn ship’s cook Kore, and a familiar-looking crewmen named Ranger. After a very rough landing, they discover the previous crew already dead (after shooting one of them anyway), but still venture out to explore a huge alien pyramid nearby. The body count quickly goes off as they are picked off, not by a single or consistent monster but a series of unlikely apparitions. As the crew dwindles down to the final few, Ranger theorizes that the pyramid itself is creating their attackers as projections of their own fears. Then Cabren discovers that Kore is more than he seems, and possibly the greatest threat of all.

Galaxy of Terror was produced by Roger Corman, part of a string of Star Wars and Alien knockoffs and “runnerups” that included Starcrash, Battle Beyond the Stars and Forbidden World. The story was evidently influenced by early versions of Dan O’Bannon’s script for Alien, which per the lore was offered to Corman before being snapped up by 20th Century Fox. The finished film was directed and cowritten by Bruce D. Clark, with James Cameron as production designer. Veteran Edward Albert, known for the crypto-biography The Greek Tycoon among others, was cast as Cabren, with Ray Walston of My Favorite Martian as Kore and Robert Englund before his Nightmare on Elm Street break as Ranger. Taaffe O’Connell was reportedly sought out for a possible nude scene, which became an infamous attack sequence. The movie made an estimated $4 million at the box office, a little more than twice its $1.8M budget. It did not receive an authorized disk release until 2010, but has been available on digital video, including free streaming on Netflix and Amazon Prime at various times.

My history with this movie has to a very large extent been avoiding it. I knew of it for a very long time, and watched clips from it, but only got through the whole thing quite recently. When I thought of this feature, I considered it on my earliest lists, but I found myself resisting its inclusion, in part because of the problem of classifying it. I was never satisfied with its usual classification as an Alien ripoff/ knockoff, but it didn’t easily fit my concept of a “runnerup”, which I previously defined as a movie very similar to but independent from a more famous one. In contrast to the likes of Starcrash or Inseminoid, there was no question that Corman “copied” Alien. After learning a little more about the history, however, I decided it still fit the “runnerup” description. What this movie really is, and the way it always felt to me, is an honest “redo” of Alien, run back to its beginnings and played out on a road not taken. Unfortunately, as already seen with Inseminoid, being cleared is not the same as being good.

One thing that has never been in dispute is that the movie has excellent production values, certainly as good as Battle Beyond the Stars and arguably better than Forbidden World the following year (when Corman was already cannibalizing sets, props and actual footage from the previous film). This is borne out in the especially strong opening act, which seems eerily close to Aliens as much as the Alien. (Incidentally, I cannot credit this to Cameron’s involvement alone.) Things get most intriguing as the openly armed and militaristic crew find themselves against a threat that cannot be seen or easily identified; in that respect, it calls to mind the “bug hunts” hinted at by the space marines. The atmosphere of frustration and ambiguity continues through the first few deaths, at least one of which can be attributed to outright “friendly fire”. If one were to look for “one thing” that sends the movie off-course, it’s the outlandish and outrageous demise of O’Connell’s character, which could easily kill many a viewer’s mood by offensiveness alone.

To me, however, that notorious scene is only a symptom of a deeper problem: The story never quite decides between being a relatively orthodox “monster movie” or accepting the potential ambiguity of the horror genre. It can be said in fairness that just considering the latter possibility puts the movie well ahead of its time. While the combination of science fiction and psychological horror was tried as early as Forbidden Planet, the next “modern” movie that stands out as handling it successfully is Event Horizon, almost into the current millennium. As anyone familiar with that production will know, the movie was still plagued by both studio interference and disappointing box office returns, and arguably never saw the light of day in the form its creators intended.

Even with that context in mind, however, Galaxy of Terror mostly just gives up on its own idea. On its terms, the deadly manifestations might be hallucinations, physical shapeshifters, or some kind of holographic projection. But for every scene that could have multiple explanations, like a crewman who gets attacked on a catwalk, there are several more that leave little or none, including a jumpy crewmember who becomes the first victim. What makes matters worse is that the introduced explanation of materialized fears does little more than blame the victims, and even then, there are still only a few attacks that really “fit” anything we learn about the character, notably a bit-part character played with almost no dialogue by Sid Haig. The biggest copout is that it is Ranger who finally bests one of the apparitions, a genuinely menacing doppelganger that further highlights the physical presence of the actor, but he still gets literally ignored for the remainder of the movie. No wonder Englund settled for playing Freddy the next 20 years…

That brings us to the “one scene”, and I had a lot to choose from. For once, my choice is going to be the one that is the most graphic and flat-out brutal, and it’s not the one those familiar with the film will be thinking of. While Ranger is facing off with his double, Cabren and Alluma try to reunite. Alluma goes down a passage that’s downright inviting by the standards of the production, a simple tube with white walls and winding black filigrees that might represent vines. Suddenly, the lights dim, and she discovers that one of vine-things has snared her foot. More follow, and she screams for the unseen force to let her go. She is quickly wrapped up, and one might half-expect a monster to appear and have its way with her. Instead, the things draw tighter and tighter, to clear and gruesome effect. She continues to scream for Cabren long after she is clearly beyond help, until a tendril wraps around her head for the most grisly effect of the film. It is only then that the cameras turn to Cabren as he arrives, just in time to see the aftermath. It's horrifying, but the one thing it's missing is a sense of a universal fear, which is the same problem this movie has run into again and again.

All I can say in closing is that writing this review at all is the closest decision so far. While I have covered plenty of movies that are obviously not appropriate for the young and/ or impressionable, I have genuinely tried to draw the line at the most “extreme” films of the era in question, especially when it comes to anything to do with sexualized violence. I will also admit I have tried to hold off on anything I feel genuinely conflicted about, which is why I very seriously considered finally bringing in an “unrated” category which I have by now used for other review features. This is a movie with a lot of good, a lot of weird, and a lot that is obviously intended to be uncomfortable for viewers of any age or era. With all that under consideration, I still find it has flaws too fundamental to forgive entirely, which is why I settled for the next to lowest rating. I may not actively hate this movie, but it is still an experiment that failed, then and now.