Space 1979: The one with Jane Seymour, John Wayne’s son and a stop-motion baboon 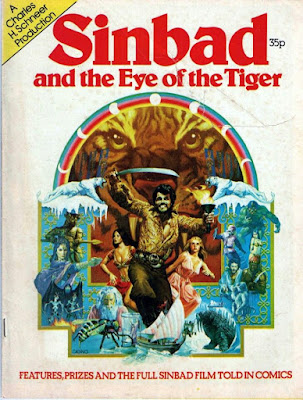 Title: Sinbad and the Eye of the Tiger

We’re now at review 50, which I had considered as an end point for this feature or at least a phase of it. I’m not there yet, but I have gotten to a point where I’ve covered almost all of the ones I had in mind at the beginning. However, there’s been one more still on hold, in part because it’s the one I have the strongest feelings about. I’m covering it now because I’ve finally been in the right mood to get back to it, and I  wanted something to mark the occasion. So come along with me and take a look at Sinbad and the Eye of the Tiger.

Our story begins in the grandeur and ceremony of an Arab court, gathered for the crowning of a monarch. Something goes awry, and the scene ends with a scream and a shot of flames. Skip forward, and we meet Captain Sinbad and his crew, who are perplexed to find the city locked down. They become more concerned when a shadowy figure unleashes a trio of semi-humanoid creatures to kill them. After surviving the resulting action sequence, Sinbad meets up with his lady love Princess Farah, who explains that her brother and would-be caliph Kassim has been transformed into a baboon. Everyone suspects their stepmother Zenobia, a powerful sorceress who wants her son Rafi on the throne. Their best chance is a legendary scientist named Melanthius, whom they find living as a hermit with his beautiful daughter Dione. The crew set out for the lost civilization of Hyperborea, with the scientist, the transformed prince and the ladies in tow. Romance blooms between the baboon and Dione, who also charms a friendly giant Troglodyte. But Zenobia and Rafi are close behind, aided by a gigantic golem called the Minoton. It all comes together inside a pyramid that is the source of the lost world’s magic, and only one can live to take the throne!

Sinbad and the Eye of the Tiger was the second to last of the science fiction/ fantasy films made by stop-motion titan Ray Harryhausen and producer Charles Schneer. The production was initiated by Columbia Pictures after the commercial and critical success of their previous film, The Golden Voyage of Sinbad, based on a plot arc originally used in an early version of that movie’s script. The cast included Patrick Wayne, son of John Wayne, as Sinbad, with recovering Bond girl Jane Seymour as his love interest and Taryn Power as Dione. The supporting cast included Patrick Troughton and Kurt Christian, previously featured in Jason and the Argonauts and Golden Voyage respectively, and Margaret Whiting as Zenobia. Peter Mayhew made an uncredited appearance as the Minoton, portrayed both with a live-action suit and stop-motion effects by Harryhausen. The film was commercially successful but drew criticism from reviewers and fans alike. It received a novelization by John Ryder Hall and a comic adaptation released in the UK. In June 2020, Power died after an extended bout with leukemia.

For my own experiences, this was one of the first Harryhausen movies I saw, and one I’ve written about before (see the original Revenant Review and my tribute to Ray at Exotroopers). From my further recollections, I rented it while looking for what I figured out was Golden Voyage, in part because the box had a still from the famous Shiva/ Kali statue fight in that movie (one more thing I remembered seeing without any idea what it was). I liked it well enough at the time, and I remained impressed with it as I continued to look up other Harryhausen movies, including the other Sinbad films. In many ways, what interested me most is that this the one even Harryhausen’s fans are reserved about, and I have rarely if ever seen anyone try to say why. Its problems are typical of Harryhausen and other genre movies, and not much more or less serious than usual. On the other hand, its strengths are quite unique, particularly the unusually focused story and some of Harryhausen’s finest and most character-driven effects, especially for the sympathetic Kassim. Compare this to Mysterious Island, my pick for Harryhausen’s weakest film, or the haphazardly episodic story and sequences of Golden Voyage, or (dear Logos) Planet of Dinosaurs, and you have a fine entry that considerably improves on its predecessors.

On closer analysis, what really defines the film are the players cast as protagonist and antagonist. Unfortunately, each goes of the rails in their own ways. Patrick Wayne (replacing John Philip Law, who would sink all the way down to Space Mutiny) is the easy target, looking good but delivering dialogue that is stilted at best. In contrast, Margaret Whiting (born 1932 and still alive at this writing!) seems to ham it up, delivering all her lines in a bizarre accent that literally sounds like it belongs in a Rocky And Bullwinkle cartoon. Yet, there are good points that build if one can get into the proceedings at all. Wayne at least feels sincere in his commitment to the role, and if it comes to that, he looks halfway convincing as an Arab, especially compared to Kerwin Mathews from 7th Voyage of Sinbad. Meanwhile, Whiting careens along with impressive momentum, literally plowing through any obstacles (and people) in her way. It’s all the more remarkable when her plans go awry, not just from setbacks and miscalculations but literally tragic turns you wouldn’t wish on anyone. At her character’s low points, the actress is heart-wrenching to watch, without ultimately proving any less cunning and dangerous.

Then there are the supporting characters, both human and stop-motion. Kassim, as noted, is compelling, visibly struggling and increasingly failing to hold onto his intellect and humanity. Melanthius is just the kind of genius who could solve any problem while still being no match for the basest conman. His lovely daughter is obviously charming with a touch of the ethereal courtesy of Power’s screen presence. Jane Seymour manages to be downright okay as the princess, without that much screen time. The Troglodyte shows up a little late to match Kassim, but still proves intriguing. On the other side, the “ghouls” of the opening (which I theorize to be based on the “Beetle Men” test reel from Harryhausen’s mentor Willis O’Brien) are suitably eerie as well as physically menacing. Then there is the Minoton, an impressively elemental force with just a hint of contempt for any human adversaries. He’s a not-really guilty pleasure to watch, though I have never mourned the fact that he doesn’t make it long enough for the battle that was planned for.

Any weaknesses not covered so far mostly lie in the final act. By the time the cast reaches the lost world of Hyperborea, things are already starting to feel rushed. Matters aren’t helped by the appearance of a giant walrus, one of the few absolute duds of Harryhausen’s career; it’s technically capable, and made somewhat more interesting by driving snow, but a tragic waste of talent compared to other creatures that were proposed, notably an Arsinotherium based on O’Brien’s unmade Creation. We get some good visuals of the icescape, particularly a tunnel used by Zenobia, and a few good visuals of the distant pyramid with its aurora overhead. However, there isn’t enough time to get much sense of the environment before getting to the pyramid. Along the way, there are some more painful effects moments for Harryhausen’s matte work, none of them especially bad in themselves, but so far below the master’s usual standards that they literally compare unfavorably to 7th Voyage from 20 years earlier. It all adds to a feeling of haste and lost opportunities, unfortunately entirely in line with the actual history of the production.

That brings us to the “one scene”, the finale, which I choose in part because it is one of the relatively few I haven’t already written about at one time or another. In the midst of a confrontation in the pyramid interior, Zenobia disappears into a glowing mist; I have always considered it ambiguous whether this represents her death from a mortal wound, an astral projection of her spirit or a direct transformation. The mist enters an ancient creature frozen in ice, which bursts out as a giant sabertooth tiger. The model looks like it could be a plush toy, but the design rings true and its motions are all too lifelike as it sends the crew scattering. Trog steps in, and the following fight is literally savage and bloody to boot. It’s enough time for Sinbad to grab a lance and draw the beast up a huge and treacherous set of stairs. The true showdown comes as the man and beast maneuver, highlighting both Harryhausen’s animation and Wayne’s surprising coordination and physicality. There are two distance shots where I believe a stop-motion manikin stands in for Sinbad, but I’m honestly not certain. Finally, the beast bats the weapon to one side, and then all is decided in one leap.

The one thing I can add to wrap this up is that I have always almost wished that this had been Harryhausen’s last film. In hindsight, it’s all the more fitting that it came out the same year as Star Wars, the last of one era passing the first of a new wave. In the aftermath, Clash of the Titans was great fun, but it could never be the same. Fantastic films were finally moving beyond the old craftsman’s trade, and increased budgets and big-name actors only made this more apparent. In further hindsight, it’s just as well that Harryhausen bowed out gracefully and apparently willingly. That is how I will remember him, graciously sharing his experience with the world. Rest in peace.