Space 1979: The one the producers of Superman made about Santa Claus 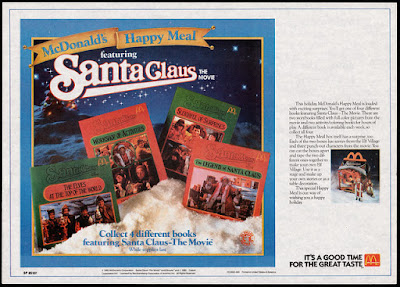 Something I’ve commented on frequently in the course of this feature is that I spent the 1980s without a TV. As a result, there have been very few movies featured here that I saw or otherwise noticed at the time (Innerspace being a conspicuous exception). As I have cataloged ‘80s movies, I have more gradually recognized that many of the strongest recollections I do have aren’t about the movies themselves, but the pop culture detritus around them: The toys, the books, the ads in newspapers and comic books, and so forth. In this territory, with my usual world’s-worst-superpower memory, there can still be greatly varying levels of impact. Sometimes, I can recall what I saw or actually had as clearly as the movies I actually watched, but in other cases, even I could easily believe I have simply cobbled together various things into a whole that never existed. This review will be the tale of one of those things. Without further ado, I present Santa Claus… The Movie.

Our story begins with a man with a familiar name trekking through the snow with his wife to deliver hand-carved wooden toys to the children of a pseudo-Medieval town. As he tries to reach the next destination, they get lost, and just when it looks like it’s all over, a glowing magical tree appears. The vision materializes into a compound full of elves, who welcome Santa Claus as their Chosen One. We see the jolly old man and his happy, dancing elves deliver toys to children through the centuries (apparently including the Crusades, the Black Death, both World Wars, etc.), right up to the very hip and modern middling 1980s. Things are changing, and Santa’s top elf wants to introduce modern mass-production methods for their brightly painted wooden toys. Meanwhile, Santa befriends a homeless preteen and a rich girl who has been helping him. Just when it looks like this movie might get hardcore, we then get introduced to an evil toymaker the progressive elf turns to for help, but really hopes to steal Santa’s magic and put the workshop out of business. Hilarious hijinks and heartwarming bonding ensues, and of course the boy comes to live with Santa. Also, the evil toymaker is hurled into space by a miscalculation with a magic candy cane, and that is literally the end of the movie.

Santa Claus The Movie was a production by Alexander and Ilya Salkind, a father-son team who had risen to fame with the Superman franchise (at least until Superman III). The film was directed by Jeannot Szwarc, who directed Supergirl the previous year. David Huddleston was cast as Santa Claus and Dudley Moore as his top elf Patch, with John Lithgow as the evil toymaker B.Z. and Burgess Meredith in a cameo as a being referred to as The Ancient One. The soundtrack was provided by veteran Henry Mancini, who also scored Lifeforce the same year. The theme song and four additional songs were composed by Leslie Bricusse and performed by Sheena Easton, after Paul McCartney and Queen were reportedly approached.  The film’s extensive marketing campaign included tie-in storybooks and a stuffed reindeer toy distributed with McDonald’s Happy Meals. The movie made a $23.7 million U.S. box office, against an estimated budget of up to $50M.

My one clear recollection of this movie was a story book from McDonalds, as well as the reindeer, which I still have. Because such things always crop up around Christmas time, that wasn’t enough to establish the reality of the movie in my mind. In hindsight, this was probably a major reason both for its contemporary failure and its relative obscurity today. Many, many years later, I read about it in a book about movies, but still never read or thought about it again. I suppose it was watching the Superman movies that finally put me in mind to look this one up.

After watching this movie, my foremost reaction was thinking of far better movies, just to get a frame of reference for what this one did wrong. There’s It’s A Wonderful Life, a classic Christmas fantasy that didn’t feature Santa at all. There’s A Miracle On 34th Street, a comedy that got in some good jabs at commercialism. There’s the excellent George C. Scott version of Christmas Carol, made for TV just a year earlier. There’s The Santa Clause almost 10 years later, which tweaked the mythology to appeal to older kids and adults while getting in some serious moments. Hell, if you want  an absolutely “straight” take on Santa, you can look back to the episode “Night of the Meek” of the original Twilight Zone series, which gave a searing vision of a clash between magic and urban poverty in a 30-minute TV time slot.

In this august company, Santa Claus The Movie wavers between tolerable schmaltz and grating cluelessness. The reasonable good moments, mainly in the first hour, are played with nearly humorless sincerity, which judging from the Superman franchise was always the Salkinds’ comparative strengths. Things keep going wrong as soon as they start trying to be “current”, let alone funny. Worse, the story runs away from its most powerful moments when Santa has to face the realities of a homeless child. What gets absolutely insulting is that the posited conflict between Santa and the toymaker which the movie turns to instead depends on ignorance from both sides. Santa is still giving out Victorian-era wooden toys at the peak of GI Joe and He Man (alas, Star Wars was already on the way out), while the toymaker has somehow failed to notice antiquated but still potentially competitive products being given away for free. The one genuinely clever moment is when Lithgow rapturously announces a plan for “Christmas 2”, which would still only make sense if he had no prior frame of reference for how buying patterns work.

So, was there anything that could have been done to save this mess? The best shot was to make it a historical piece; put it in the 1800s, when the transition from craftsmanship to mass production was taking place, or in the 1950s, when modern marketing was still emerging. Failing that, make it a satire of commercialism and go after the real biggest targets, especially the cartoon/ toy positive feedback loop, and show what it was like for the kids who were poor, without a TV or just didn’t like the shows. Then, for a little depth, show Santa having to deal with a wish/ request that goes beyond one gift: A job for a parent, a reunited family, a steady supply of food or a home to come back to. It would have been deeper than the crew’s previous escapist fare, but not totally out of their depth. Even if it wasn’t good, it would have been something more than a mythical elf bringing toys.

For the “one scene”, I’m going to go with one of the briefer moments in the movie, but one of the few within the toymaker’s story arc I found entertaining.  In B.Z.’s very first scene, he is in a congressional hearing investigating his product. He tries to act unconcerned when a doll ignites merrily, forcing an official to beat out the blaze in haste. Then he is confronted with a stuffed panda that seems to tear open of its own accord. The contents are revealed to be literally glass, nails and what looks like sawdust. While the magnate tries to sputter in protest, a congressman declares that anyone buying his products should have their heads examined. And this is where we could have had a discussion. It’s all well and good to say that handmade toys were better and safer than mass-produced toys, when done right. But there were still issues like lead paint, not to mention the fundamental fact that wood is flammable. Then there is also the issue of proportionate risk; He Man’s head might come off more easily that a rocking horse’s, but there wouldn’t be splinters and nails sticking out of the break. Per the movie, however, all modern toys are junk, and we are clearly supposed to take the word of filmmakers and writers who would still have grown up well after companies like Marx and Mattel started churning out factory-made toys by the ton.

With all that said, I was still very conflicted about rating this movie. I came very, very close to giving it the lowest rating, to the point that I revised it in the course of finishing the review. My final decision was that there was just enough good in the movie to bring it up a notch. More importantly, I just can’t bring myself to hate this movie, if only because that would be like kicking a blind man in the shins. Maybe, just maybe, this movie stirs up the Christmas spirit of charity and generosity after all. At least it can be said the people who made it did something nobody had done before and nobody really tried again since. It’s certainly not hard to see why.