Space 1979: The first one where roaches evolve in to people 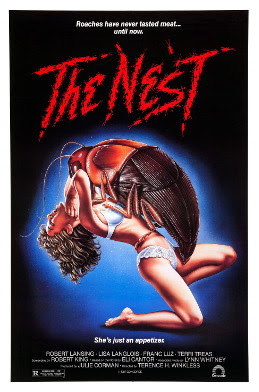 I have already commented occasionally that there’s quite a bit of random in what I do for this feature. On further reflection, this has been reflected most in the movies I’ve reviewed from the late 1980’s, which technically weren’t “supposed” to be within the timeline under consideration. In practice, these exceptions have been all over the map as far as how they came to my attention. Some were ones I planned to include that turned out to be later than expected, like Deep Space and Mac And Me. Some were ones I had been looking for on and off, like Dr.Mordrid, or ones in my collection that I had been meaning to watch again, like The Hidden. At least one was suggested to me, which is how I ended up reviewing Space Mutiny. Then there were ones I ran across more or less at random, when I was looking into something else, taking a break to watch something different, or just throwing on some background noise during other work. That was probably a fairly appropriate introduction to The Nest, a feature film that happens to come from the wife of the most notorious B-movie producer in history.

Our story begins with an introduction to an island town and our hero, the sheriff. He is concerned when people started noticing swarms of aggressive insects, represented with either slasher-movie POV shots or swarms of roaches. Meanwhile, an old acquaintance returns to the island, a woman identified as the mayor’s daughter, which soon creates tension with his girlfriend, a waitress who easily looks 10 years older than the new arrival and maybe older than him. As the love triangle plot goes nowhere in particular, we see more attacks by the bugs, claiming pets and at least one human. We also meet the mayor, who knows enough about what’s going on to try to hide it, and a crazy scientist lady who is breeding insects that can adapt to resist poisons and even take on the properties of their prey. As the movie unfolds, things heat up between the sheriff and the mayor’s daughter, while the bugs lunch a good part of the town’s population including the waitress. As the finale approaches, the scientist discovers one more twist: The bugs have hybridized with humans, creating a giant, seemingly intelligent monster.

The Nest was produced by Julie Corman, the spouse of Roger Corman (see Battle Beyond the Stars, Forbidden World, etc, etc), who had been making movies with or without her famous husband since the early 1970s. The story and script were written by Robert King from a 1980 novel by Eli Cantor; unsurprisingly, the insect/ human hybrids appear to have been added, though reviews and summaries of the novel do describe an insect “hive mind” mentioned at several points in the movie. The film was considered a debut for director Terence Winkless, though he had long experience in movies including directorial credit for at least one short film. The cast included Robert Lansing in top billing as the mayor, Lisa Langlois as his daughter, Franc Luz as the sheriff and Terri Terreas of the Alien Nation TV series as the mad scientist. The movie was released with some favorable reviews and an estimated box office of $3.8 million that may or not have covered its budget. As of this writing, it is available for streaming on Amazon Prime.

This movie drifted into my awareness when it popped up in recommendations for streaming. I finally gave it a viewing over a weekend, then watched it again after starting this review. What kept me interested enough to decide to cover it here was the very strange connections with other films. This is the kind of movie that “feels” like a ripoff, except that there are really very few candidates to have been ripped off. Its obvious roots are in the “killer animal” movies of the previous decade, notably Phase IV and Squirm, but those were far enough in the past that imitation can be defended as an homage rather than plagiarism. There are more suspicious similarities with Creepshow, notwithstanding the fact that Cantor’s novel came first, though if anything, the present film is far more conventional in handling the concept/ genre. What comes totally out of left field, and sealed in my mind both its inclusion here and its classification as a “runnerup”, is that the movie somehow anticipates Mimic by almost a decade. This is surely a stranger coincidence than any charge that could be made against The Nest, perhaps calling into question the later movie’s claimed inspiration of a decades-old pulp short story. However, I am still inclined to regard the two as genuinely independent, which makes their similarities far more fascinating.

Unfortunately, once again, being cleared of “ripoff” status is not the same as being good. Here, the real problem is that we have two quite different concepts in play, and somewhat surprisingly, it’s the one that comes in at the end that is far more satisfactory. The first two-thirds of its 88-minute runtime are routine by any standard, especially for anyone already familiar with the earlier films already discussed, made all the more tiresome by the human melodrama (admittedly a common denominator with ‘70s counterparts). Worse, the special effects and overall execution are indisputably inferior to the preceding films. The one sequence that succeeds in its own right is an inventive kill where the bugs start carrying off a victim’s severed arm, while many more (conspicuously an otherwise inspired scene in the diner set to “La Cucaracha”) fail simply because the very ordinary roaches aren’t threatening. Things finally get interesting when the “hybrids” appear, well into the last half-hour; incidentally, I had no idea of that angle until I was looking up information partway through my first viewing, and I still have not found anything to foreshadow it. One might wonder why they waited so long, except that the few humanoids we actually see are clearly at the limit of what the budget could support and still nearly immobile. The most genuinely menacing moment is when the mayor is seemingly transformed into a bug, something the movie doesn’t bother to hash out an explanation for, with limbs and mouthparts tearing through his skin.

Now it’s time for the “one scene”, and I considered several. The one that continued to stand out to me is the scene that introduces the hybrids. The sheriff, the mad scientist and a comic relief companion descend into a lower level of a lighthouse featured prominently in the establishing shots. They hear strange noises, and then we get a glimpse of a small creature that leaps around the room. The brief shots are clearly designed around the limitations of the effects, yet they achieve the very elusive sense of agility. The creature finally either pauses of its own accord, and the close-ups reveal an insectoid-cat hybrid. It really looks more like a zombified animal, apart from at least two very long antennae and a set of mandibles that slowly open and shut. Like the humanoids that follow, it’s awkward and cheap-looking in execution, but strange enough in concept and design to be fascinating. When the sheriff prepares to kill it, the scientist objects, leading to a pointed one-liner, “What should I do, make friends with it?” Of course, the creature strikes, straight for the sheriff. In the midst of the scuffle, the comic relief tries to come to the rescue, setting off a Rube Goldberg chain reaction that ends in another genuinely impressive gore effect. Then the companion remarks, “No bug is too big, right?”

What has kept me fascinated with this movie is simply trying to decide if there is or ever was a “right” way to make it. Even factoring in the clear limitations of the budget and limited technology, I cannot avoid the conclusion that it “should” have been done by someone else. The strongest and most unfortunate impression, right or wrong, is that the producer was trying to equal her more famous partner’s many genre entries without his help. Whether or not this was the case, the film could certainly have been done better with Roger Corman’s old crew, though that would have ultimately meant time-travelling back to when James Cameron was affordable. It would have been better still to get either stop-motion guy David Allen or the insane Chiodo Brothers crew (see Killer Klowns From Outer Space), very possibly the only people who could have done the humanoids well on this movie’s budget. What we got instead is another movie that doesn’t reach its potential, apparently for no better reason than that nobody cared enough to do better.