Space 1979: The one where an alien goes to McDonald's 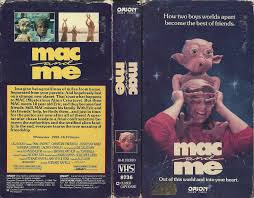 Title: Mac And Me

Something I’ve been talking about nearly from the beginning of this feature is my fairly uncanny ability to remember movies (also books, TV, toys, etc.) and just how much pure Hell I have gone through just to figure out what I saw (see Krull). The paradox is that there’s plenty of things I’ve seen that seemed unremarkable at the time that have long since dropped into the realm of old tapes, bootleg disks, sketchy internet videos or quite possibly the circle of Dante’s Hell that literally froze over. It's like the difference between catching Bigfoot after a lifetime of searching and finding out he was living in your garden shed. I watched the Battletoads pilot when it aired. I saw Meteor Man in a theater. I still have an authorized VHS tape of one of the Ewoks movie. This review is for a movie that was like that, at least for quite a while, and I would have rather gone ice skating in Cocytus than look it up again.

Our story begins with a space probe landing on an alien planet that’s never identified. When family of strange-looking humanoids investigate, the probe’s vacuum sucks them all up. Then the probe returns to what proves to be present-day Earth (which would be a trip of several thousand years if it’s not one of our solar system’s rocky planets). The aliens escape, but are separated from one of their children, who stows away with the family of Eric, a supposedly sympathetic kid in a wheelchair. The kid notices little things that lead him to suspect the family is no longer alone, especially missing soda (and also a misadventure when the alien discovers power tools). The pair soon make contact, and a supposedly heartwarming friendship blossoms between them. But the young alien’s parents are still lost, and government agents out to find them are closing in. To keep the aliens free, the kid must go on the run, but not before stopping at McDonald’s.

Mac and Me was a 1988 Orion Pictures release co-produced by R.J. Louis and funded in part by Golden State Foods, a distributor for the McDonald’s restaurant chain. This and Louis’s previous associations with Ronald McDonald house contributed to the perception that it was either paid for by McDonald’s or deliberately used as product placement, as well as criticism for similarities to E.T The Extra-Terrestrial. The leading role of Eric was given to Jade Calegory, who was in fact wheelchair-bound due to spina bifida. The score was written by Alan Silvestri, whose previous work included Back to the Future and Predator. A scene where Eric is wounded by gunfire was partially censored from the theatrical release. The film cost an estimated $13 million dollars and made an estimated $6M US box office. After initial VHS releases, it remained generally unavailable on disk or digital distribution until as recently as 2019, when a Blu Ray was released by Shout. Like Terrorvision, it has 0% on Rotten Tomatoes.

My own experience with this one has to be from the middling 1990s, when I was in high school, and it’s one of my more specific recollections. I was spending a night with family friends I sometimes stayed with, and they had their young granddaughter over. We went to a video store, and someone thought it was a good idea to pick up one about a kid and an alien. I followed it well enough to remember the bare outline of the movie, including the McDonald’s scene and the finale. As far as I remember, I thought it was terrible and had little doubt the one or two other adults felt the same way, but the girl loved it. Moving forward, this was the one I knew I had to do for this feature, and there was at least once I was prepared to review it but did something else. I continued putting this off even after I watched it, long enough to cover Duel first, because it really is that bad.

Something else I must say up front is that I never got into E.T. It came out when I was very young, but my first definite memory of seeing it was when I was at least 8 and maybe 10 or more, and I think I only ever watched it one or twice after that. That limited exposure was enough to leave me unimpressed. In the end, E.T. was more naïve than wise, with little sign of either physical or moral strength to back a pacifist philosophy; in that respect, the aliens of The Abyss or The Day The Earth Stood Still were far more interesting. With that already in mind, I take no offense at Mac And Me for following E.T.’s lead, especially with the earlier film already 6 years past. If anything, it came out at just the right time for a knockoff to give a fresh or even improved take on the source material.

That, of course, is the rub. The chief distinction Mac And Me offers is a family of aliens rather than only one, but all that leads to for most of its length is to focus on a literal child. Even so, there are good moments, especially when we see the rest of the family. Scenes of the group wandering in the desert are well-shot and utterly forlorn. At the same time, we get a sense of spirituality and moral values that is refreshing for a genre more typically influenced by secular materialism. It builds up to a genuine payoff when they try to help Eric in the finale, even if it is predictable. The one drawback with the aliens is the uneven effects. The creature design is strange if not unpleasant, while the execution is clearly inferior even to movies with far lower budgets (notably Killer Klowns FromOuter Space the same year). What really pushes things off the rails are multiple scenes when “Mac” and the others are stretched or even flattened with no further effect. It is these literally cartoonish sequences that push things into the realm of “cute” for its own sake, without actually achieving a genuine sense of slapstick.

All the real problems come from everything else in the movie. This is where the perception of the movie as an E.T. knockoff is misleading, but the truth is even bleaker: This movie is not just trying to imitate one movie, but virtually every ‘80s movie. Cute kids, check. Soft-rock music, check. Dancing, check. A building that goes up like an oil rig blown with several tons of thermite, check. It is this that spoils any chance this movie has of being “so bad it’s good” in my book; apart from the aliens, nothing about this is even unintentionally funny. In fact, the movie drags this out so long that even its most infamous scene at the McDonald’s is a comparatively brief diversion, started at the hour mark and finished well within 5 minutes. What it really makes me think of is the work of a forger, perfect in technique but lacking any sense of originality or spirit.

For the “one scene”, there’s just one choice that offers something to work with, and it is the sequence that leads up to the finale. The reunited alien family wander into a grocery store, in full view of the staff and patrons. The bystanders stare, but none of them are disgusted or terrified. A more poignant moment when a toddler makes eye contact with Mac’s younger sibling. One can argue the realism of the scene, but there is at least a sense of understatement. Then the manager confronts the adults and calls for security. When the guard arrives, the father alien is merely curious, finally grabbing for the gun. The rest is far more predictable, but still effective, which is far more than can be said for almost anything that has come before.

This movie is another knockoff/ ripoff that I judge more harshly by comparison than on its own merits. There’s nothing innately “wrong” about copying a more successful movie, but it’s quite another thing to do it badly, and far worse to offer it with the promise of something it could never be. With that, I wash my hands of this one. Take it or leave it, I’m not going back.