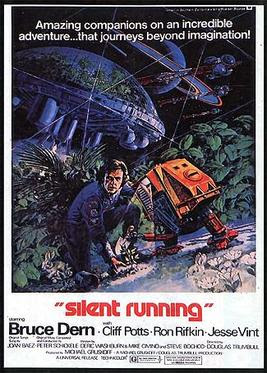 As I write this, I’ve been slowing down the pace on this feature to develop some other material. I’ve used the time to think over what I want to cover, ultimately including when I might actually wrap this up. I came up with some good ideas and plans, which I will be getting to shortly. Then in the meantime, I finally got a break on the one movie I was ready to write off, to the point of specifically presenting a replacement for it. I can’t say I was really looking forward to it, but I waited long enough for this one that I certainly wasn’t going to set it aside. So here is Silent Running, the movie I refused to pay money for.

Our story begins in a garden, tended by a man in what looks like a monk’s habit. His meditations are interrupted when several guys in motorized carts race through. We learn that our protagonist Lowell and his companions are aboard a spaceship, part of a fleet that carry the remnants of Earth’s forests in self-contained domes. We learn from his arguments with the others that plant life on Earth is extinct, with food crops being replaced by synthetic sources. Lowell is committed to their mission to preserve the planet’s terrestrial ecosystem, but can’t seem to get along with his crewmates as well as he does with the animals or a trio of robotic drones on board. When an order comes through to destroy the forests so the ships can be used for commercial purposes, Lowell stages a one-man mutiny, killing the rest of the crew in the process. He pilots the ship into deep space, where he must learn how to take care of the forest and teach the bots to do the same. However, Earth’s command hasn’t given up on him, and his hardest trial still lies ahead.

Silent Running was the first film directed by effects pioneer Douglas Trumbull, following fine work for big-budget films like 2001 and The Andromeda Strain. The effects and models for the $1M production included a 25-foot miniature of the ship Valley Forge and full-sized puppets of the robots, dubbed Huey, Dewey and Louie. The soundtrack was provided by the late Peter Schickele, otherwise known as PDQ Bach, with two original songs performed by folk singer Joanna Baez. It received mixed reviews both from mainstream critics and science fiction writers, but still achieved lasting “cult” status. Trumbull continued his effects work for films like Star Trek: The Motion Picture and Blade Runner, but his only other directorial credit would be 1983’s Brainstorm. The script cowriter Michael Cimino went onto fame for The Deer Hunter and infamy for Heaven’s Gate. The film received a Blu Ray release in November 2020, ending an extended period when it was available mainly through digital purchase or rental.

The best frame of reference I can give for Silent Running is by comparison with Logan’s Run.  From the time I was growing up, the latter film was an old movie everyone said was “cool”. This one was more like the “classic” that got assigned in class. I knew of it for a very long time solely from mentions elsewhere, including the NPR show Schickele Mix. As with many things, I looked it up soon after I got Netflix, and was more underwhelmed than I expected. When I thought of this feature, it was one that I both considered and had suggested to me early and frequently; I even got a comment suggesting it had influenced Dark Star when I posted my review of that movie. But it turned out to be pure hell to get without paying for a rental, and I had other leads that covered the same territory, particularly Phase IV, a surreal ecology parable in its own right. In the end, I had no trouble moving forward without it, but the unfilled entry still hung around in my own mind. When I finally got the damn thing, it was first and foremost a chance to get it over with.

Something I could have said about Silent Running long before I saw it is that the movie’s premises makes so little sense that it undermines its own point. If an extinction of photosynthetic organisms on the order the movie posits really happened, the free-living human population would be either without food or without air long before any meaningful solution could be developed or implemented. (On the other hand, introducing artificial food sources in a manageable timeframe could easily reduce deforestation and pollution.) At a certain point, erosion alone would force the survivors off-planet or into artificial habitats of their own, a scenario that could be harmonized with the movie if certain points are taken as propaganda rather than fact. (The quite casual line that “everyone looks the same” becomes entirely chilling.) The one thing that would never be allowed under any circumstances would be for the large and elaborate life-support domes shown onscreen to be abandoned, much less willfully destroyed. If a very little had been done to address these considerations, we could have had a compelling conflict where both sides might have a point. Instead, we have from the start a story that’s too simplistic to argue the science or the ethics.

With all that out of the way, we still have plenty of flaws left to cover, most of them centering on the simple fact that the protagonist is unlikable at best. He has so many issues with his crewmates and for that matter the bots that he only seems to be on the trees’ side because they don’t argue. When he has to face the deaths of the crew, there is still little sign of real remorse, only a vague discomfort at getting the solitude he may well have wanted all along. What makes matters far worse is that he clearly doesn’t really know much about plants, an already evident flaw that gets magnified to a ludicrous degree toward the film’s finale. In the face of his literally dangerous ignorance, all his semi-spiritual communing with nature is quickly exposed as mere posturing. Even as an ecoterrorist, he has no more credibility than a self-described Marxist who holds a six-figure job at Halliburton.

After all that venting, I might as well go straight to the one scene, and this time I will look at a bit more material. The one thing that usually gets this movie favorable mention is the robots, a set of non-anthropomorphic machines (resembling the scutters of Red Dwarf more than anything else) that literally waddle around the ship. In fact, they play a limited role until relatively late in the film, when Lowell finally gives them attention. That leads into a sort of montage near the hour mark, after one of the bots is destroyed. It starts with Lowell naming the bots. He then tries to teach the bots to plant a tree, with comical results. Then there is an awkward moment when the remaining bots pause after discovering the leg of their lost companion, leaving the human more tongue-tied than usual. Finally, there is an all too brief scene when Lowell teaches the bots to play cards. Here, we get a sense of personality, as the bots click and whir to each other as they examine their cards. (I believe this was what was suggested as an influence on Dark Star, but I don’t see close parallels, and the original version of that one would have been near completion when this movie came out.) It’s a good moment, to be sure, but still an isolated one, placed at precisely the point when the movie’s already wonky pacing starts grinding to a standstill.

That just leaves the rating, which was a difficult decision. My usual criterion for the lowest rating is quite simply that I can actively hate the movie just for existing. On those terms, this one doesn’t willfully provoke me the way others do, but that is because it has just enough polish to hide its worst qualities. Even then, it would have been easy to go easy for all the movies that it undoubtedly anticipated or influenced: Star Wars and Trek, Blade Runner, Short Circuit, Red Dwarf and even Wall-E. The problem is, every last one of those were vastly better, and so were near-contemporary movies like Dark Star, Phase IV, and Westworld. In my book, a movie that could and in this case certainly should have been better is far more offensive than a bad one, and that leaves this one as one of the worst offenders of all. And I’m hard-pressed to think of any time I’ve been more happy to put a movie behind me.