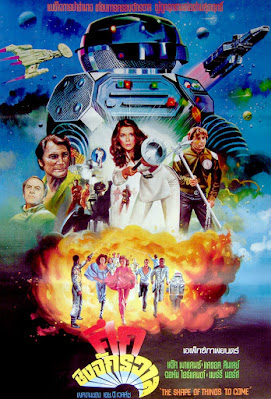 After five months and almost 50 reviews doing this feature, I’ve had enough time to look back on what I’ve done versus what I thought of when I first considered it. If there’s been a surprise, it’s that I still haven’t done that many really low budget movies, though that was one thing that wasn’t a priority. I planned to do knockoffs, ripoffs and “runnerups”, and I could have predicted in advance that many of these would be at least in the middle ranks for money and talent. The real bottom of the barrel would be the ones that weren’t even getting general release by the period in question, the foreign films, the no-budget “independent” movies and the direct-to-video releases. For this review, we’re really getting into that territory, and the big surprise is it took me this long to get to it. With that, I introduce The Shape of Things to Come.

Our story begins in the tomorrow after tomorrow, which a long text crawl tells us is the  aftermath of a robot revolt that left much of the Earth uninhabitable. We go to New Washington, a colony on the Moon that looks as exciting as an office building. Things pick up when they detect an incoming ship on what proves to be a kamikaze attack, which the staff respond to like a pedestrian who didn’t wait for the walk sign. In the aftermath, they realize the attack was engineered by Omus, a renegade ruler of a distant colony that supplies a vital antiradiation drug. When Omus demands that he be made dictator of the known galaxy, the surviving authorities are helpless except for the Starstreak, an advanced ship that looks like a cross between the Enterprise and a Y-Wing. The inventor of the ship (I think) gathers a motley crew of his son Jason, a lady friend named Kim and a reprogrammed robot for an expedition to stop his former student. Their one chance is to join up with a group of rebels and defeat Omus’s army of very slow-moving robots, before he blows up the planet and its supply of pharmaceuticals for… collector value???

H.G. Wells’ The Shape of Things to Come was made in Canada by Astral Films, part of what would become the nation’s leading media conglomerate, for a presumably non-trivial budget of 3.2 million Canadian dollars. Its full/ official title referred to an H.G. Wells novel that was in no way related, possibly to ride a wave of Wells adaptations that also included The Food of the Gods, Empire of the Ants and The Island of Dr. Moreau (actually good). Its top-billed actors were Jack Palance as Omus, Barry Morse of Space: 1999 as the inventor Caball, and Carole Lynley of The Poseidon Adventure as the rebel leader Nikki. The cast member most likely to be familiar t anyone reading this is Anne-Marie Martin as Kim, who costarred as Dori Doreau on the TV series Sledge Hammer and in the cult movie The Boogens, and was married to Michael Crichton (see Futureworld).

My experience with this one started with a near-blind digital rental about 5 years ago. What made an immediate impression at the time was the very good effects for the Starstreak, which looks good enough for Star Wars or Trek and makes a fair amount of sense to boot. I especially liked the detachable landing module, which I suppose reminds me of the “Spaceman Spiff” ship. It was not lost on me that the rest of the production was not up to par. Still, when I finally got to watching it for this review, it was a very harsh surprise just how bad and wonky this is. The first and most representative part of this rude awakening is the opening theme, which the apparently distinguished Paul Hoffert apparently willingly put his name on, and is quite possibly the single most ‘70s thing I’ve seen in the course of this feature. And I already reviewed Phase IV, Zardoz and Space Mutiny.

Of course, the first thing to address about this movie is whether it’s a Star Wars ripoff/ knockoff. I don’t completely agree with this, but only because it’s a bit like saying Star Wars was ripping off 2001. Obviously, the crew hoped to reproduce Star Wars’ success, but their most immediate influences lay in other directions, most obviously with Dr. Who and other British science fiction. Unfortunately, this mostly shows in the clunky and cheap costumes and robot/ creature effects, which really can’t even be excused by the budget given that Star Wars only cost 3 to 4 times as much and Zardoz actually cost less. The real budget problem is surely Palance, who seems so accustomed to coasting along on Shane that he doesn’t even bother to chew the scenery.

If there’s any redeeming feature to the movie, it’s the relatively good acting and dialogue among the main characters. This serves mainly to establish a sense of earnest sincerity that sometimes helps. Even here, things are uneven. Martin is charming, while the robot is impressively enthusiastic, as long as he isn’t trying too hard to be “cute”. Things get wonky between the inventor and his son, whom I literally didn’t know were supposed to be related until the end of the movie. Again, Palance as Omus is the weak link. He only comes into contact with the other characters in the final scene, and that short time is enough to feel like the actor is trying to justify himself through the character. He starts trying to impress his former mentor with a plan that will clearly harm him more than anyone else (and spoiler, it’s never stopped). He then moves on to trying to torture his adversaries seemingly for little more than an admission of his greatness, all while wearing the surreally laughable helmet. Finally, we get an obviously unplanned pratfall, like a thunderbolt from the gods to remind him how much he wasted his talent.

For the “one scene”, I had to cover the movie’s big battle scene, between the rebels and Omus’s bots in an open field on the surface of the planet. It is here that the movie reaches the point of laughable incompetence, except that it actually musters a bare minimum of logic to set it up. The robots have no apparent armament except their unimposing metal claws, while the rebels are literally equipped with clubs and sticks. The bots at least prove genuinely durable, absorbing almost everything except electrical shocks that seem to incapacitate them. But it’s all like watching children try to bring down a knight in full armor. The bots hold their ground only by being slightly less ineffectual than their opponents. When Omus cuts in, it’s a merciful reprieve, and from Palance, that’s saying something.

Of all the movies I have considered for this feature, this is one of about three that I seriously considered disqualifying as too incompetent to be of further interest. (The others are Space Mutiny and one more I still haven’t decided on.) Yes, it’s bad, technically and by almost any other standard, maybe even as bad as Inseminoid if not nearly as unpleasant. Still, there’s something more to it than just a Star Wars cash in, even if the filmmakers themselves don’t quite figure it out. If you can get past the wonky pacing, there is a genuine sense of wonder here, albeit a misguided one. If you can’t quite get there, you can still laugh at the robots and Jack Palance getting clonked. And if that doesn’t sound like a pitch, what the Hell are you doing here?

For links, the image credit goes to Space 1970. See also Canuxsploitation and Brandon's Cult Movies for actual Canadian takes on the movie.