Space 1979: The one where an evil medicine man is reincarnated from a tumor 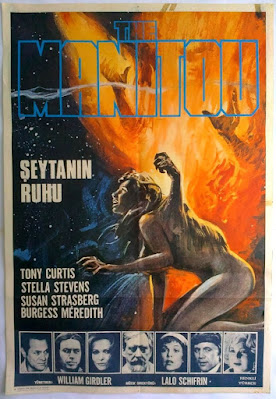 In working on this feature, some of the biggest surprises have been the ones I didn’t think of. There were some I decided didn’t suit my needs at the start, and most of those have remained outside consideration. There were some I included because I got hold of them around the time I needed a review, like The Andromeda Strain. There were even a few I hadn’t heard of until they were either suggested to me or mentioned in the course of reading, like Space Mutiny. But then there have been some well within the parameters of the feature that I certainly knew about, but still didn’t think of until I was very far along. This review is for one of those movies, and it happens to be one of the strangest and most unclassifiable movies from the period under consideration.

Our story begins with a woman named Karen who reports a strange growth on her neck. Her doctors soon realize that it has the characteristics of a fetus. For no  obvious reason, she seeks the help of an old boyfriend Harry, who works as a shady psychic. He is observant enough to notice she has started speaking an unknown language in her sleep. Meanwhile, the men of science prove helpless to remove the growth, in part because their equipment keeps failing or seemingly turning against them. After consulting with various colleagues and an apparently knowledgeable scholar, Harry concludes she is under the influence of the spirit of an evil medicine man, intent on being reborn through her. Their best hope is a present-day elder named John Singing Rock, who is convinced the spirit is an old enemy named Misqamacus. But by the time the friendly shaman arrives, Karen has already given birth to a malevolent-looking midget. The halls of the hospital shake, burn and freeze as the medicine man fights to contain the reincarnated spirit and its demonic allies. With the powers of benevolent magic failing, it’s up to Harry to join science with the supernatural in the final battle with evil.

The Manitou was produced by the company of Melvin Simon, a real estate developer who also financed Porky’s among other movies in the 1970s and early 1980s, based on a novel by Graham Masterton. The film was directed by William Girdler, previously best known for a string of “blaxploitation” movies, and distributed by chronic offender AVCO Embassy Pictures (which I just realized I haven’t included before). The cast was led by Tony Curtis as Harry, with Michael Ansara as Singing Rock and Burgess Meredith in a small role as an anthropologist. Karen was played by Susan Strasberg, one of several children of Lee Strasberg, a distinguished theater director and acting coach. The movie was rated PG, despite a sequence in which Strasberg appears nude; some sources report it rated R, which may have been given in later distribution. The movie received very hostile critical reviews and was listed in the book The Golden Turkey Awards, though how well it did at the box office is less clear. By coincidence, Meredith was known for playing The Penguin on the 1960s Batman TV series, while Ansara was the voice of Mr. Freeze on Batman The Animated Series. A case cited at the end of the film of a Japanese boy found with a “fetus” may refer to a case of a parasitic twin or a dermoid cyst.

This one is by almost any standard a total mess, though partisans will still debate whether that is entirely a “bad” thing. It mixes horror, fantasy and science fiction, with just the kind of brazenness that makes many entries in this feature worthwhile (see especially Krull and Adventuresof Hercules). Unfortunately, it is difficult to make the case that it does this particularly well, and far too easy to argue the reverse. For well into the first hour, it remains a quite routine horror movie, readily inviting the critics’ frequent and unfavorable comparisons with The Exorcist. Even the horror is quite tame, outside of a sequence where a possessed surgical laser routs the hospital staff. What is missing throughout is a sense of pain and debilitation from Karen, who usually shows as much concern as would be expected for a bad pimple. Things start to get lively when John Singing Rock comes in, then it goes from 0 to 600 when Misqamacus arrives.

Almost everything memorable comes from the last 40 minutes or so, apart from Burgess Meredith’s appearance as a fractured intellectual. (Amusingly, he welcomes meeting the resurrected medicine man as a research opportunity, which would be an intriguing viewpoint if his character had any more screen time.) This is where the critics usually have a field day making fun of the effects, including Misqamacus himself. Yet, the visuals certainly “work” in context. The lighting and camerawork usually discourage close examination of the makeup and creatures, while greatly enhancing an effective “old school” atmosphere. Then there are genuinely eerie touches, particularly the desolate scene of the frozen corridor and a doorway that seems to open onto an empty starscape. The centerpiece is the “birth” of Misqamacus, who clambers right out of the cocoon of the growth. It’s not “’good”, even by the production’s uneven standards, but the pacing and the grim appearance of the being prevent it from breaking the mood if it has taken hold at all.

The one thing that will make or break the movie is Ansara’s performance. Time and evolving sensibilities has certainly been against it on this point: While the actor had played Indian characters a number of times, he was in fact of Lebanese descent, the kind of typecasting that was getting dicey even in the ‘70s. The script and story don’t help matters, painting the character in broad strokes that don’t hold up for anyone with experience dealing with actual natives. (Among other things, many/ most native Americans claim to follow some form of Christianity.) But this allows a boldness and honesty that goes beyond the sum of his lines and screen time, freely criticizing Christianity, science and western civilization in general. In his most hypnotic monologue, he pronounces, “Your God won’t help you… not prayer, not holy water, not the weight of a thousand of your churches…” That his own magic doesn’t really do much better just makes the proceedings that much more interesting.

For the “one scene”, I really couldn’t avoid the finale, which I have already mentioned several times. The final minutes find Harry and Singing Rock trying to hold the door of a hospital room against Misqamacus. The whole room has disappeared, leaving the medicine man and Karen’s hospital bed seemingly floating in space; Singing Rock declares it an “illusion”, without seeming to convince himself or anyone else. Behind the gloating dwarf, a much larger and clearly more powerful entity comes into view, in the likeness of a dull orange sun that looks like a giant eye. Harry tries to harness the electricity and technology of the hospital as a spirit with its own force, a notion that actually follows from the concepts of animism. That revives Karen, who sits up; while she is clearly unclothed, there really isn’t a lot to see if you aren’t really looking for it. In the finest nuance of her performance, Strasberg smiles gleefully as she releases volley after volley of lightning at the medicine man and the entity he has summoned. It’s like a cross between Star Wars and The Sword And The Stone, and 49 reviews in, it’s still easily one of the most surreal sequences of any movie I’ve covered here. The only real problem is, it took all the preceding running time to get here.

With all I’ve already said, the one thing I can add is that this movie truly defines what I meant when I came up with “Irreproducible Oddity” as a category. There’s a lot of things that wouldn’t be accepted or allowed in more recent times, and plenty more that would easily be dismissed or ridiculed. But all those involved still clearly gave it their best, and the result is still worth watching. You might not like it, or understand it, but you will not forget it.