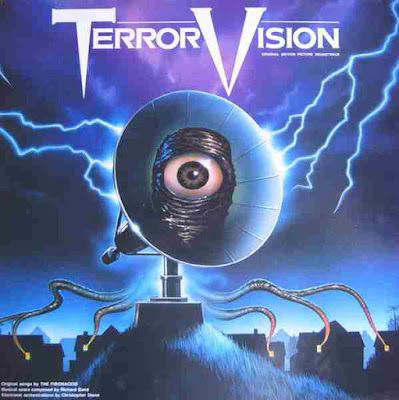 As I write this, it’s just past Halloween, and I came very close to doing the present review as a holiday special. I didn’t quite get to it in time but still definitely wanted to get this one in. It’s another movie I considered very, very early (see the Critters review), though I debated for a very long time whether it was “right” for this feature.  On that vein, I even debated using this one as a final entry. I definitely won’t be getting to that point for a while yet, but I decided the time was right for this one.

Our story  begins with a quick introduction to the Putteman family, consisting of a mother and father, their teenage daughter Suzy, a kid named Sherman and Grampa, who is obsessed with weapons and the military but never actually mentions being in a war. Through their introductions, Mr. Putterman ties to fix their satellite dish himself. Things go awry when the dish receives a signal from a briefly seen interstellar civilization that is discharged as a bizarre creature. The monster begins eating members of the household, included a visiting pair of swingers, while Sherman and Grampa continue watching 1950s monster movies hosted by a personality named Medusa. When Sherman tries to warn others, the creature deflects suspicion with a further ability to recreate the faces of its victims (or save them for later…) When all seems lost, the kids manage to calm the monster long enough to befriend it, with help from Suzy’s boyfriend OD, and begin sharing the wonders of Earth and TV.

Terrorvision was a production of Charles Band and his studio Empire, which has been turning up here a lot more often recently. The film was directed by Ted Nicolaou, also credited with Empire’s Dungeonmaster the previous year, and starred a range of low budget/ cult movie talent including Mary Woronov of Night of the Comet and Gerritt Graham of the rock musical Phantom of the Paradise as the parents. The film received a limited US release in early 1986, with an estimated gross of $320,000. Rotten Tomatoes gives the movie 0% based on 9 reviews. The music was provided by Richard Band and The Fibonaccis, with the latter writing and performing the movie’s theme song. Like The Day Time Ended, the soundtrack received a release on vinyl, but unlike the former film, it is not available in digital format and remains expensive in its original format. The movie was released on Blu Ray with The Video Dead in 2013, though the latter film was not an Empire release. A short-lived television series of the same name appeared in 1988, but was likewise unrelated.

This is another movie I first saw on Netflix in the early 2010’s. It stands out first and foremost as a movie that never pretended to be taken seriously. All the characters are cliches, albeit well-rendered ones, every twist in the story is predictable, and almost every joke is at the movie’s own expense. It also further demonstrates the usual inexplicably good Empire production values. It’s quite clear that the movie cost far more than it ever earned in theaters, though no tale tells of its budget, and it still looks way too good for an operation on Empire’s level to pay for. The monster and related effects are excellent, and undoubtedly took up much of whatever money they had. The cost of the sets would also have run up a very tidy sum, unless (as I think very likely) they filmed the whole thing in somebody’s upper-class home.

Meanwhile, the thing that keeps the movie going is the surreal interactions among the characters. In contrast to Band’s early venture Laserblast, this movie succeeds in presenting characters who are absolutely terrible but somehow interesting and even endearing. Sherman and Grampa are actually smart, and their wargames are wonderfully horrifying in hindsight. The parents and most of the other adults are simply idiots, not because they are dumb, but because they are too self-centered to notice anything amiss. Mrs. Putterman in particular is so brutally insensitive to Sherman that he would be better off calling CPS on her rather than telling anyone about the monster. Suzy falls in the middle; she is vapid but sensitive in her own way, enough to start paying attention by the time the authority figures have been picked off. Finally, there is Medusa, in a class by herself. Alternating between her on-screen persona and an impatient Bronx accent.

Naturally, the movie’s greatest strength is the monster. It’s a gooey, oozey, asymmetrical creature that does little more than hide and eat, yet still stays ahead of most of the human characters. Just as intriguing are the traces and remains left behind. Its attacks seem to liquefy its prey, very graphically shown with Grampa’s early demise, resulting in numerous pools and piles of slime, clothing and less certain stuff.  A nice extra touch comes with the consumption of OD, resulting in an assortment of metal of more substance than the character. Its further ability to recreate the heads of its victims is truly unsettling; when we finally hear from its creators, it is hinted that the beast retains the essence of its victims in some kind of gestalt. What is most impressive is that the creature manifests a perversely childlike personality, grunting and twirling its eyes in excitement whenever something attracts its interest. It’s revealed to be a renegade house pet, and it does indeed make sense as a puppy that soiled the rug.

For the “one scene”, this is the one thing that tempted me to write this one off. This is a movie that is meant to be appreciated in full; focusing on one segment merely diminishes both the part and the whole. still, there was one reasonably familiar scene that stood out to me on review. Close to halfway, the Puttermans and a visiting pair of swingers are shifting from room to room as various hijinks and revelations unfold, including the discovery that the other guy, Spiro, is bisexual. After making this disclosure, Spiro goes to a room with a hot tub where his partner has been waiting. When he enters, she is submerged at one of the pool, with only her head above the surface. She makes no move, but her expression seems inviting. Spiro climbs in, and is merely intrigued when he realizes there is something on the surface of the water. He approaches eagerly, reaching for the lady. Then a pair of jaws (which don’t match any part of the monster we see before and since) catch him by the throat. It is the creature’s most menacing strike, and the one time it feels like it could be in a “straight” monster movie, however briefly.

As usual, this brings us to the rating. I considered beforehand giving this one the highest rating, while after enduring its weaker moments, I came close to bringing it down a notch. The rating I give it now is about what I figured on all along. It’s not a top-notch movie, but it’s one that accomplishes what the filmmakers clearly set out to do. If it does not aspire to be more than it is, then at least it does not fall short of its ambitions either. Above all, it’s fun, especially with the theme song, possibly the catchiest after Flash Gordon.  Whoop whoop… Dammit, now I have to hear it again.

Image credit Discogs. Again, they have everything. While I'm at it, here's the feature Introduction.