Space 1979: The one Steven Spielberg made about a guy and a truck 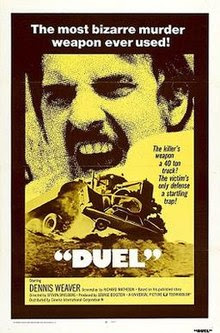 Back when I wrote out my Introduction for this feature, one of my harder decisions was to set aside movies made for television. I knew this would mean excluding some very good material, like Trilogy of Terror, Gargoyles, and for that matter Space: 1999. However, this is one decision I have so far honored. At the same time, there was one I always meant to be an exception, and fortunately the groundwork was laid out for me as it was successful enough to get a theatrical release. Without further ado, I introduce Duel.

Our story begins with an individual identified  as Mr. David Mann on a road trip that takes him from the city into the desert. As the credit titles wrap up, he finds himself behind a semi pulling a tanker trailer. He becomes impatient and passes the truck, only to have the unseen driver roar in from behind to cut him off. When the driver finally signals for him to pass, he barely avoids a head-on collision with a third vehicle the trucker clearly knew was coming. It’s the beginning of a battle of wits and nerves that quickly pushes Mr. Mann to the edge. As the final confrontation ensues, he must face the mammoth truck head on, with no certainty that either combatant will survive.

Duel is considered the first feature-length film by director Steven Spielberg, from a script by Richard Matheson based on his own short story of the same title. The film starred Dennis Weaver, an accomplished movie and TV actor with a career going back to the early 1950s. A score was provided by Barry Goldenberg, who had previously worked with Spielberg on a segment for Night Gallery. It was originally filmed as a 74-minute TV movie for ABC, reportedly in 13 days. Spielberg received further funding to expand the film into a 90-minute version for theatrical release by Universal. The expanded version notably added a sequence where Mann helps a school bus, while about 1 minute of footage used in the broadcast version is estimated to have been cut from the theatrical version and later home video releases, mainly consisting of additional comments from Mann.

The main thing I can say about this movie is that I read the story before I saw it, but well after I first heard of it. I can further attest that I never saw much debate about whether it should be considered science fiction. This is undoubtedly in large part because of Spielberg’s later contributions to the genre, but I am sure that is not the only factor. For a frame of reference, the very first place I heard of it was almost certainly the 1975 book Science Fiction Movies by Phillip Strick (which also figured in my experience with Dark Star), published around the time Jaws came out. Just how to classify it remains difficult. It has elements of science fiction, horror and action/ adventure, with arguable post-apocalyptic subtexts on the side. What stands out most of all is the disconcertingly forward-thinking treatment of “road rage” and the general breakdown of etiquette and civility. If it is considered in post-apocalyptic terms, it could be compared to Night of the Living Dead or Phase IV, not the fall of human civilization per se, but the first tremors of an upheaval that might bring about its end.

The overriding and indeed overwhelming focus of the movie is the truck. It’s huge, dilapidated, and ironically archaic, yet still a fitting embodiment of technology and “progress”. There are so many head-on closeups of the machine that it feels like the movie should be retroactively titled “Grills”, except of course we see far more of the truck than of Jaws. The chrome, the grime, the infamously ambiguous row of license plates, all build a sense of character as strong as any “killer robot” (Maximillian of The Black Hole comes to mind). The driver, on the other hand, is as elusive as the Bruce the Shark. The story gives several opportunities to hint at his identity and motives, conspicuously a tense scene at a truck stop, but they are all either red herrings or unresolved ambiguities. For all intents and purposes, the villain is the truck itself. Incidentally, this marks the biggest departure from the short story, which very specifically describes Mann’s reactions on seeing the trucker’s face, though Matheson’s own script apparently reflected the decision to leave him unseen.

On the other side of the equation, the problems with the hero are closely tied with those of the story’s premise. Just as everyone in Jaws would be safe if they stayed out of the water, Mr. Mann could clearly be safe if he pulled over and waited out the villain. To the credit of the filmmakers and the character, there are several points where he tries to do just that, in the process developing a little bit beyond the nondescript cipher he is at the start. It must be further allowed that there are also points where the trucker could presumably come after him on foot, so it all balances out within the “man vs. machine” conceit. What makes it work overall is Mann’s frequent monologues, which make him relatable if not necessarily more likeable. Unfortunately, this is where the theatrical version seems to undermine the original point, prominently in the contrived school bus scene. The clear expectation is that this will make us root for him, but to me, the resulting changes in the story and pacing are too disruptive for a rewarding payoff. It’s like if a pizzaman knocked at the door during the final act of a slasher movie.

For the “one scene”, it’s the opening of the movie that I find most intriguing. At face value, it’s little more than a transition from the city to the wilderness, drawn out to the length of the credits. In fact, this is one of the points where the theatrical version added to the original, and the results are deceptively effective. The big payoff here is the steady accompaniment of the car radio. Here, the story ties into the wider world, and it works. Most of it is inane banter, punctuated by unflattering reactions from man. But squarely in the middle of it, we hear a caller who turns a question about a census form into an extended complaint about his marriage and his resentment of his obviously more successful spouse (not far from the backstory the story suggests for the trucker). It is here that we see most clearly that something is not right with the world of the film, even if it is by all indications the same one we already know all too well.

This is a movie that took me a long time to get to, and it is in no small part because I needed time to think it over. In any history of science fiction, this one would feature prominently just for its historical significance. Considered on its cinematic merits, it is if anything even more impressive. However, even with my very early interest in the film, it took a long time to decide how or even if to fit it in here. What kept my interest is the transition that the movie went through, from story to TV movie to a theatrical release, and in far too many ways it is a cautionary tale. What I hope to do is show what they did right, especially within the constraints and occasionally surprising freedom of 1970s broadcast television. I especially hope that, with continued and potentially greater appreciation, there will be more access to the original version, which I will admit I have yet to view myself.  For now, appreciate it for what it is, and what it laid the way for.

For links, I commend movie-censorship.com for an especially comprehensive analysis of different versions of the film.  A video review from Cinemassacre is also recommended.