Space 1979: The one with a kid and Stan Winston 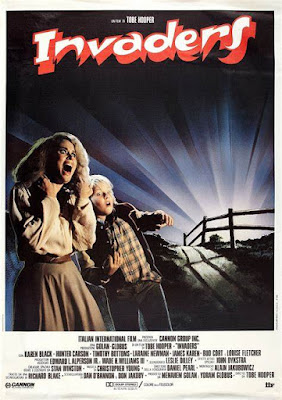 One of many things I’ve thought about on and off is the “remake” phenomenon. It’s long been fashionable to complain about the long cycle of remakes of 1970s and 1980s sci fi and horror movies, and the very real toll undoubtedly taken on original projects. But the overlooked flipside is that the 1980s was arguably when remakes came into their own, and certainly when the category had its greatest successes. I had given thought to several examples for this feature with varying degrees of seriousness: The ‘70s King Kong (there’s always an outlier), The Blob, Cat People, or by broader definitions Outland and Return to Oz.  Then there’s The Thing, a remake so successful in its own right that it certainly didn’t fit in here. The one I’ve finally settled on (if you don’t count Flash Gordon) is also the one that was on my radar all along, a remake which if it didn’t challenge the original certainly went in its own direction, yet still ended up largely dismissed or forgotten. I present Invaders From Mars, the 1986 version, and I’m really starting to hate that year just for how much of a laughing stock it has made of my original timeline for this feature.

Our story begins, after a credits sequence that looks and sounds almost exactly like Total Recall, with a kid who sees strange lights outside his window. His parents assure him nothing is wrong, but his father goes out to investigate. In the morning, Dad is acting strange, while the boy’s teacher is apparently acting as weird as usual during a frog dissection. Soon, the boy is noticing more people around him aren’t themselves. He soon turns to the school nurse, while the teacher gets suspicious after he catches her eating one of the frogs. He turns the tables and follows her to an isolated sand pit, where he discovers a submerged UFO commanded by the Supreme Intelligence, a creature that looks like a giant living brain. It turns out the aliens have been capturing the townspeople and injecting them with mind-controlling implants, visible on the back of their necks if not covered, presumably as a springboard to world conquest. The kid’s only chance is an open-minded general, who believes enough of his story to uncover a few infiltrators in his own ranks. As the finale ensues, the army closes in on the aliens’ lair, but not before the nurse and the kid are captured!

Invaders From Mars was a remake of the 1953 film of the same name, directed by The Texas Chainsaw Massacre auteur Tobe Hooper from a script cowritten by Dan O’Bannon, the creator of Alien (and Dark Star). It was the second film the pair were involved in by the notorious Cannon Group, following Lifeforce the previous year. The film starred ‘70s stalwart Karen Black as Nurse Magnusson with her own son Hunter Carson as the kid David Gardner. Other familiar cult movie standbys included Louise Fletcher of Brainstorm as the teacher Mrs. McKeitch, James Karen of Return of the Living Dead as the general and Laraine Newman as David’s on-screen mother. Special effects were provided by John Dykstra (“credited” for Space Mutiny) and  animatronics star Stan Winston, who had established himself with The Terminator and supporting effects for The Thing before making it big with Aliens and Predator. Like Lifeforce, the film was judged a financial failure, earning $4.9 million against a $7M budget. Critics both in the media and science fiction compared it very unfavorably to the original film, with some favorable comments on its effects and frequent references and inside jokes to 1950s films.

My own experiences with this one begins with a single sighting in college, when I saw maybe the last 15 or 20 minutes on cable TV. As usual, I had no idea what I was watching, and as far as I recall, I was quite baffled even then just trying to figure out when and by whom it was made. I think I identified it from the credits or by checking the TV guide, and I might have rented it not too long after. In any case, my memory gets fuzzy until I picked it up in a 2-pack with another movie I watched before deciding to review this one, meaning this is going to cost me another viewing if/ when I get back to the other movie. What stands out above all from my first encounter on is that this is the uncanny kind of “outlier” that feels like it was made too soon rather than too late. Much of this can be attributed to the influence of those who made it, especially Winston, not to mention the other films he contributed to. Even so, I still find something almost unnerving in the finale in particular, which feels like it should be in a ‘90s action “crossover” like Starship Troopers rather than a movie from the middling ‘80s.

If anything, it is the finale that is the problem, simply because it so easily overshadows the rest of the film, and if it is recounted in cold blood, there is no reason this should be the case. To begin with, the sets and creatures that appear at the end are all seen much earlier, and considering who was on board, they aren’t exactly “great”. Given that the one of the same guys somehow made the Alien Queen the same year, however, that shouldn’t be a major criticism. Ironically, the most unsettling effects sequences are the treacherous sand pit, further calling to mind Tremors of all things. Turning to the rest of the film, there’s plenty to like, or at least remember. While critics have singled out its frequently comedic tone compared to the dark atmosphere of the original (which I’m not even going to try to talk about), the movie achieves a balance that works, in its better moments akin if not quite equal to the social satire of a George Romero movie. We get some good paranoid moments when the protagonists end up in the already-compromised military base. The very best moments are between kid and the teacher. Fletcher in particular is more than game, conveying a personality that seems to welcome rather than resist the commands of the invaders. By comparison, the chemistry between Emerson and Black is almost underwhelming, though again that is a very minor complaint.

Now dammit, I’m already up to the “one scene” and I had to go with the finale and a moment I remembered from my very first fragmentary viewing. This time, I have to give a little buildup. By the end, the general is leading his men through the tunnels of the aliens’ hideout; as in the preceding scenes, there is a strong sense of coordination and comradery that compares favorably even to Aliens. They run into several drones, which are a little too jumbled to be convincing as organisms or a threat, but still interesting. Any flaws in the creatures are more than made up for by the environment itself, which looks like a natural cave with touches of both the biological and technological. As they round the corner, the general recognizes one of his own men coming the other way, last seen caught in the sand pit. He calls out, and their comrade answers by warning them to shoot him. He continues to repeat the same warning as he draws his own weapon and starts to fire. Only then do the general and the other troops start shooting themselves. It’s dark, gritty and poignant all at once, all done with surprising understatement, one more moment that feels far ahead of its time and all the more out of place in a movie actually rated PG!

That leaves the question, how does this movie stack up? And what does it really tell us about remakes? I can at least say that I’ve rated it higher than I necessarily expected to going in cold. It may not re-envision the material as completely or as well as The Thing or even The Blob, but it at least puts the old and new together into something that is still truly unique. As for the bigger picture, it should serve as a reminder that little if anything that we complain about now is truly new; after all, even Ben Hur was a remake of a film no older than the ‘80s movies are now. Fortunately, movies like this also prove that even a remake can be original, if the job is given to talented and creative people. If the people making movies now will pay attention, we can still have remakes that audiences can look forward to rather than dread.

Image credit Wrong Side of the Art.