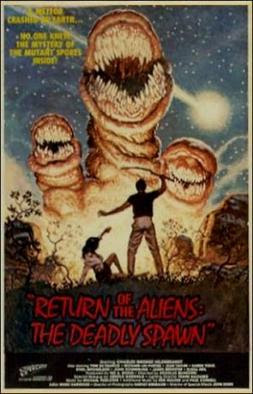 Title: The Deadly Spawn aka Return of the Aliens

As I write this, I’m closing in on yet another milestone I had considered for ending this feature. This also got me thinking again about my complaints through the last 20-some reviews about how many of the ratings have ended up at 2 or 3 out of 5, and the further fact that none since Sinbad and the Eye of the Tiger has gotten 5/5. I finally started to think over the kind of movie that I have given the highest rating before, not necessarily for being better than other movies or even necessarily being that good, but simply for doing justice to their own premises. That brought me very quickly to one particular movie that had been dropping on and off my radar for a very long time without ever settling in my mind whether it belonged here. Once again, I’m finally bringing one more back from the “maybe” pile, in no small part for sheer notoriety. Here is The Deadly Spawn, a movie that somehow got made for $25,000.

Our story begins with an atmospheric shot of a falling star in the woods, witnessed by a group of campers who are quickly lunched by an unseen creature. We then meet a  kid who sleeps in a room full of monster movies and collectibles, his aunt and his older brother, who apparently don’t notice when several other members of the household don’t return from the basement. After a tangential psychologist’s appointment, the kid discovers that the basement has been infested by eyeless, toothy creatures that seem to reproduce by fission, ranging from the small fish-like specimens to a towering entity that seems to have sprouted two extra mouths. While the little guys are terrorizing the neighborhood, the big one breaks out of the basement for a domestic rampage, just as the big brother’s friends arrive for a study group. It’s up to the kid to defeat the creature, but how many more will be left?

The Deadly Spawn was an independent film produced by Ted A. Bohus, also responsible for the infamous Nightbeast the previous year, purportedly based on his own concept. Douglas McKeown, a high school teacher with a background in theater, was credited as writer and director, while the effects were handled by John Dods, who went on to work on Ghostbusters 2. The total budget for the production is estimated at $25,000. Artwork for the movie’s advertising was provided by fantasy artist Tim Hildebrandt, credited as co-producer. The film is the only acknowledged role for Charles Hildebrandt, the artist’s son. The finished film was distributed by the moderately notorious 21st Century Film Corporation. It was sometimes shown under the title Return of the Aliens, implying a connection with Ridley Scott’s film (see also Alien 2), but there is no evidence that this was known or approved by the actual filmmakers. An intended sequel was delayed until 1990, when it was released under the title Metamorphosis: The Alien Factor, reflecting significant conceptual differences from the original film. The movie was available digitally until at least 2016, but as of this writing does not appear on any streaming platform.

For my experiences, I first saw this movie as a digital rental in mid-2016, which still feels like the most appropriate format for it, and picked up a DVD a little over a year later. My foremost impression has always been a sense of conceptual purity; this is so egregiously definitive of its time and genre that it could be the Jungian archetype of an ‘80s monster movie. I suspect this has contributed to occasional perceptions of the movie as a “ripoff”, when in reality, this is another case where the accusers can’t seem to get their timeline straight. It came out after Alien, of course, but the similarities don’t really go much further than having a monster with no eyes. (If it comes to that, the parallels are stronger in the sequel.) The look and overall feel come a lot closer to Gremlins, except that came out the following year. The one movie that does land close to this one in both timing and themes is The Thing from the preceding year, but that’s close enough for “coincidence” to be in play, and in any event, that one had enough troubles of its own that nobody was going to follow its lead just for a quick cash-in.

On closer evaluation, it’s almost impossible to start with anything but the spawn themselves. The creatures are very well-done for any budget, let alone for a movie made for literally less than half of what Plan 9 From Outer Space cost in 1950s dollars. The design is simple enough to seem generic, and often suffer from the common problem of being unable to move at more than a slow plod. On the other hand, they are quite distinctive in overall look, and the little guys prove downright zippy, especially in the water. There’s additional effective moments as the lesser creatures get picked off in various mishaps, culminating in a shot where a mid-sized specimen gets lunched by the big one. These incidents give a sense both of vulnerability and daunting numbers; for every one that is destroyed, there are always more. If there’s a nit to pick, it’s that there’s several “ship in a bottle” moments where the larger creatures turn up in places they shouldn’t have been able to enter except by eating their way to their current size, as seen egregiously in the surreal final shot. However, this is the kind of plot hole that adds to the intrigue.

In all of this, it’s easy to overlook the human cast and especially the kid. The limitations of the budget are especially apparent from the cast, and several characters can easily be discounted as monster food. I personally assumed that two people in the central household weren’t even related until I looked up other reviews. However, the quality of the acting remains consistently competent even in the most blatantly gratuitous kill sequences, which in my assessment is a major reason the over-the-top gore never seems entirely comical. The gruesome end of a would-be romantic interest is especially impressive in its ruthlessness, from the filmmakers as much as their creation. In the midst of it all, we have the kid, which any number of more typical movies would have tried to shape into a heartwarming rascal that actual audiences would cheer to see eaten. Instead, we have a character who is at times frightening in his own right for his sheer detachment. He talks cheerfully about his favorite movie monsters, but is eerily silent and calculating when he discovers the several of his family have been eaten by the real thing. In keeping with the unsentimental tone, he seems to abandon the surviving cast, right until his own plan is ready. It’s one more thing that could be easily criticized, yet surprisingly realistic and forward-thinking.

That brings us to the one scene, and this time, I actually changed my mind. I was considering several scenes with the kid or the creatures, but I finally settled on the sole appearance of a pair that are apparently supposed to be the kid’s parents. After a leisurely sequence of their morning ritual, the father inspects the basement, which proves to be flooded from a window left open during an overnight rainstorm. For some reason, the architecture is gothic brick complete with archways that look fit for a crypt. Of course, he gets eaten, by a shape seen only in shadow. Then the wife comes down, and there’s moody camerawork as she looks around by the light of a single bulb. She starts as something touches her shoulder, then starts to look relieved when she realizes it’s her husband’s hand. That’s when she turns, giving us the first shot of the big guy, with an arm still sticking out of its mouth. And after all the talk of ripoffs, I refuse to believe it’s a coincidence that this is virtually identical to a sequence from Jurassic Park!

In conclusion, as usual, we come back to the rating. Graded on a curve, this is the kind of movie that would pass just for showing up. There’s simply no logical explanation how a film as cheap as this could have existed in the 1980s, which certainly figured in my rating. Even without those obvious mitigating circumstances, however, this remains one of the more impressive and flat-out better 1980s monster movie. To really find further fault with it, especially in terms of its effects and visuals, would be the same as dismissing any movie made before “modern” technology was available. You can take it or leave it, but it will not let you forget it.