Space 1979: The other one I quit watching 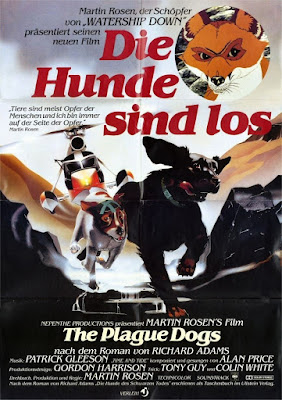 Something I’ve already regularly commented on is that there’s a lot of genuine randomness in this feature. I’m obsessive enough about doing this and other things that quite a few of my reviews get written whether or not I really have something in mind to review. This has been especially true of my animation reviews, which have already been all over the map in chronology alone. This time around, I’m back with another animated feature, in no small part because the only other material I was investigating in the same time frame wasn’t suitable for this feature. A minor upside is that it finally fills in one of the bigger gaps in the wonky timeline of this feature, an entry for a year that was very good for genre films but not for the kind of notorious or obscure entries that this feature is meant to cover. Here is The Plague Dogs, a cartoon from the same people who thought it was a good idea to make an animated movie about talking rabbits being hunted, bulldozed and enslaved by a collectivist dictator.

Our story begins with a lavishly detailed animation of a large black dog paddling around a swimming pool, but the surroundings don’t look like a friendly recreation center. With no further explanation, a human pushes the dog under water until the animal stops moving, only to pull him out and revive him. We momentarily learn that this is a lab, and this is still the kind of cartoon where the animals talk. The dog we have seen is Rowf, while the one the story focuses on is Snitter, a terrier with a mysterious wound who repeatedly complains about “the flies in my head”. Soon enough, the pair make their escape into the countryside, where they continue a debate over whether human “masters” are more trustworthy than the lab staff they call “whitecoats”. When attempts to find a new master fail, they must hunt sheep and vermin to survive, with help from a fox who continually reminds them of his cunning. However, the whitecoats have discovered the escape, and are now concerned with avoiding further scandal. The order goes out for the dogs to be destroyed as possible carriers of a germ the lab was experimenting with, complete with a deployment of the military. As the hunting parties close in, the dogs must take desperate measures to survive, and it still may not be enough.

The Plague Dogs was an animated film by Nepenthe Productions from a novel by Richard Adams; the same company and crew had previously produced the film Watership Down also from a novel by Adams. The film has been identified as an MGM release, which would have made it possibly the first MGM animated film since The Phantom Tollbooth; in fact, MGM/ United Artists was only responsible for its distribution in the UK. The voice cast was led by John Hurt of Alien as Snitter and Charles Benjamin as Rowf. The supporting cast included Patrick Stewart as a military man and Judy Gleason of Inseminoid (!) as a well-bred pet dog. The film had two versions, one at 1 hour and 43 minutes, the other edited down to 86 minutes. Like Watership Down, the movie was controversial for violence, this time including several on-screen or implied human deaths. It remains unclear how long or widely the original/ long version was distributed, though it is reliably reported that it was only available on home video in Australia until recently. The shorter cut still received a PG-13 rating on US release in early 1985, almost certainly the first animated feature to do so (see also Night of the Comet), indicating significant delays and possible re-edits following earlier test screenings in late 1983.

For my personal experiences, I got my introduction to this movie watching exactly the first three minutes on streaming, after going in with nothing but a vague familiarity with the title. That was enough to convince me that it belonged in or at least adjacent to the science fiction genre, a point I have yet to see argued either way by anyone else. At that point, I quit, partly because I didn’t really have time but also because I knew I needed to retreat and regroup on this one (see also Howard the Duck). I finally came back to it after going through several much higher-profile genre films without encountering any material I could work with. (Reviewing movies that are actually popular just doesn’t work for me…)  It was necessary to work with the 86-minute cut, which was about as long as I could have worked with. The best I can say in summary is that it’s an utterly mindboggling experience. This is a cartoon that explicitly shows a dead dog being thrown in an incinerator with a snow shovel, a rat being injected with bubonic plague, and a fox devouring all the eggs in a nest, and these are just prominent background details in a story that really only seems as bizarre as it does for how straightforward and linear it is in presenting its brutality.

For deeper analysis, the best frame of reference is Watership Down. The earlier film was already so excellent and evocative that I have personally pondered what might have been if this crew rather than Ralph Bakshi had handled the animated version of Lord of the Rings. (Dear Logos, Bakshi…) Here, the animation is if anything improved, but changed fundamentally enough that it is debatable if it is “better”. Watership Down mixed realistic animation with highly stylized sequences to portray the animals’ mythologically-tinted perspective. Here, the images from beginning to end are almost ruthlessly “real”, especially in the clinical environment that opens the film. Clearly, if the dogs ever had a worldview as rich as that of the bunnies, the casual abuses of the “whitecoats” have long since erased it. Something else established at the outset is that the movie’s horrors lie in understatement. In this respect, it is somewhat difficult to assess how much is a matter of the creators’ choice or imposed by censorship. Certainly, what we don’t see rarely makes what we do any less unsettling, especially compared to the over-the-top approach of near-contemporary fare like Heavy Metal.

The “problem” that gradually wears the viewer down is a strange sense of detachment. The story arc starts on par with One Flew Over The Cuckoo’s Nest and ramps up to Rambo (I know, First Blood), with a bit of The Crazies on the side, but one may be hard-pressed to find reason for greater emotional involvement in the midst of the thematic jumps. It’s easy to feel sympathy with the animals, but this does not make it easy to “like” them. Snitter, well-played by Hurt (a very accomplished voice actor if one looks at his whole filmography), is at least troubled by the events that unfold, but he is usually too distracted by the problems in his own head. There’s more of interest in Rowf’s distrustful personality, while the one character with a well-developed redemption arc is the fox, who gets a grim but genuine “last stand”. By comparison, the dogs don’t really show the courage of their kind until the very end, which would be as heartbreaking and nerve-wracking as Brazil or Dawn of the Dead if we could just get invested in the characters beforehand.

After all that, I still have the “one scene”, and what I choose is more like a moment. In the midst of the dogs’ first hunt with the fox, Snitter turns his attention to a bandage that has covered his head from the beginning. At first, it seems futile, but then he gets a hold with his hind leg, and suddenly it comes loose all at once. He immediately snarls at the last reminder of their time in the lab, then begins to tear at it for far longer than he took to remove it. Finally, he buries it like an especially odious stool, just in time to charge the quarry as the others drive it uphill. It’s a sequence that humanizes the character while still showing him acting like a dog, all animated with superb attention to realism and attention to detail. To the movie’s credit, it’s far from an isolated moment, but I still wish the movie had more like it.

This movie left me very conflicted about the rating. This is a film I genuinely wanted to give the highest rating, and I could easily talk myself into giving it at least 4 out of 5. Failing that, I seriously considered giving it “unrated” status, but for as much territory as it covers, it doesn’t have the underlying unevenness that has led me to use the rating (see House, again). Given its flaws, as well as the work the same crew were capable of, I give it the rating I accept as most appropriate. Considering how much of the DNA of this feature lies in my past misadventures reviewing animation, I consider it as much of a compliment as an actual higher rating. This is the kind of movie that gets made when those involved either have no idea how to connect with an audience, or just don’t care what the theoretical masses think. Whether or not you like it, it should by all means be respected.