Space 1979: The one with an alien non-custodial abduction 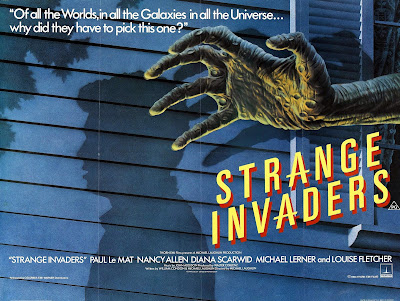 I have mentioned previously that one of the hardest decisions to make is the right timing for a review. After a few early missteps, I decided I needed to do a review within one or two, at most three days of my most recent viewing, or I have to go back and do it all over again. This time around, I’m working with one of two movies I watched before deciding what to do for the last review, and I decided I needed to do this now If I’m going to do it at all. As I write this, I’m about to go through with another viewing, because I really need another look at this film, but I’m still trying to get a head start just to get my thoughts together. With that, here is Strange Invaders, the weird little ‘80s B-movie that came with my copy of Invaders From Mars.

Our story begins in the 1950s, with a young couple who are interrupted by the arrival of a UFO. Skip forward, and we meet a guy who will count as our hero as he comes to the same town, which mostly looks like it’s still in the Fifties. However, the townspeople are hostile to strangers, and soon demonstrate powers that nearly destroy the visitor before he escapes. When we catch up with him, he is trying to make contact with a tabloid that has printed a photo of a strange alien creature he glimpsed in the town. With the help of a friendly reporter, a shifty government agent and a mental patient, he discovers that a group of aliens have been posing as townspeople for 25 years, while leaving those they replaced in an uncertain state of suspended animation. As the story plows ahead, our hero reveals his own secret: He was not just a passing traveler, but a man looking for his ex-wife and missing daughter. Are his family members human, alien or some combination of both? Why are the aliens really on Earth? And can they reunite before the aliens’ leaders order them home? The only real spoiler is that these questions will not all be answered before the end.

Strange Invaders was the second film by writer/ director Michael Laughlin, as a thematic followup to his preceding film Strange Behavior. Much of the film’s $5.5 million budget came from the British company EMI, previously responsible for co-producing films including Sam Peckinpah’s Cross of Iron and Spielberg’s Close Encounters of the Third Kind. Per the lore, Laughlin personally cast Paul LeMat of American Graffiti against type in the starring role. The next highest billing went to Robocop’s Nancy Allen, then best known for several films by former spouse Brian Depalma, as the reporter Betty. Other cast included Louise Fletcher of Brainstorm and the 1986 Invaders From Mars as the government agent, a role reportedly written as a man, and Wallace Shawn of Princess Bride and the Toy Story series as Betty’s superintendent. The film was deemed a commercial failure, with a box office of only $1.5M, though Peter Nicholls’ near-contemporary Fantastic Films reported that it “looked on the way to becoming a cult favourite within weeks”. The production effects guy James Cummins went on to direct the 1990 zombie movie The Boneyard.

As described above, I picked up this movie years ago simply because it came with Invaders From Mars. Apart from Fletcher’s involvement and similar themes and titles, the pairing appears entirely random (though not quite as much as Terrorvision and The Video Dead). At the time, I didn’t really know anything about it, and after a viewing or two of the other film on my epic rides to work, the disc ended up neglected on the shelves. In the course of research for this feature, however, I kept seeing it mentioned favorably, until I began debating reviewing it instead of Invaders From Mars. I finally put the disc in my trusty player without even knowing which movie would play, and it turned out to be Strange Invaders. I almost immediately decided that it wasn’t going to replace the other film or come ahead of it in the lineup, but it was far too strange an experience not to cover it sooner or later.

After two viewings in about a week, the first and foremost thing I can say is that I don’t “get” this movie, and from the postmortem of reviews, a lot of people much closer to the film’s intended audience reacted the same way. What it feels like to me is a parody without any actual jokes, a description I can’t think of applying to any other film except (dear Logos) Laserblast. Fortunately, it isn’t dull or unpleasant in  the way that one was. On the other hand, it is chock full of incongruous moments, including an overwrought soundtrack that mocks the 1950s films it was clearly based on more thoroughly than anything on-screen. On top of that, it has one of the more convoluted and confusing plots I have encountered, especially for what is at the core a quite simple story. This is reflected especially in the summary, intentionally written from my first viewing; I only realized on my second run that several plot points I had included were explained or foreshadowed well before I had worked them out. The most embarrassing part for all concerned is that my summary might well make the story’s twists sound more interesting than they are on film. (Score one for actual ADD.)

The one thing the film certainly does well, and in my opinion the reason it remains watchable, is the aliens themselves. From the start, they are menacing both in appearance and abilities, but never quite deliberately ugly. The make-up and effects are all superb, certainly more so than would be expected from the budget alone, and have aged more gracefully than plenty of far more recent films. There are fine extra touches when the aliens go in and out of their human disguises, particularly in the finale when most but not all start to shed their Earthly forms en masse. What is most commendable, however, is the relative complexity of their motives and behavior. It is made clear fairly early that they are trying to study humans rather than conquer or interfere, at least for the time being. It is also established almost as a matter of course that they have an arrangement with the government, though it is never clear if it is a matter of protection, mutual benefit, or simply because they cannot be removed without open warfare. Finally and most intriguingly, they are shown to be fairly vulnerable in one-on-one confrontations and genuinely fearful of discovery. This leads to an amusing moment when Fletcher’s agent complains about an upset created by the tabloid, further remarking, “They actually take you seriously.”

For the “one scene”, the moment that simply cannot be topped is a flashback recounted by a mental patient. He reveals that he once was a husband and father travelling through the town where the aliens reside with his wife and children. He becomes separated from them while investigating the strange sights, until he finally concludes that they may all be in danger. He returns to a rented room, where there is a strange glow, and hears one of his children cry out. He enters and finds one of the aliens standing over one of his children. In an absolutely grisly effect, the creature literally implodes the child, leaving an empty husk of skin (possibly the basis for their disguises, but that’s not quite explicit) and an orb of blue-white energy. There is a truly eerie shot of the alien holding three of the orbs, one larger than the others. Then, in a jarring transition that really works, the father attacks and either stuns or kills the creature. Then he hears the voices of his family and lowers his impromptu weapon. Sure enough, the voices are coming from orbs themselves, which slowly float into the night, with one last plaintive call in the child’s voice.

Even though the pairing is arbitrary, I can’t avoid comparing this movie to the ‘80s version of Invaders From Mars. To the extent they can be compared, the latter movie is more polished and frankly more competent. What Strange Invaders has in spades is originality and a deeper brazenness, which went a long way toward convincing me that it didn’t belong here. In the end, I did this review because I don’t know when or how I might get around to this one again. Maybe I’m not rating it as well as it deserves, but I’m already going about as far as I can in honesty for a movie that simply does not connect with me. I can by all means recommend watching it, as I usually would even for the movies I give a 2, and you just might like it a lot better than me.