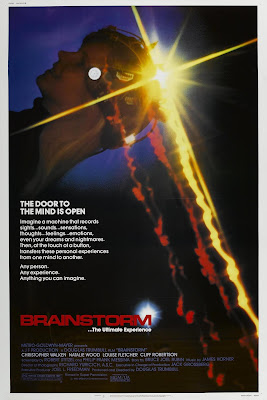 At the time of this writing, I’ve finally taken a break from blogging. That, in turn, gave me a little time to plan out what I want to do, which brought me to an idea I’d kicked around before: Revisit a few directors and filmmakers I had covered before. Now, I have already covered some chronic offenders, including none other than Roger Corman. But what I have in mind for this feature are filmmakers who never really made the big time, yet still left an indelible legacy. I already knew there was one movie that was going to be in this lineup, by someone who already turned up multiple times but only once in the director’s seat. I present Brainstorm, the second of two films directed by legendary effects guy Douglas Trumbull, and it’s going to take a long, hard look to decide whether one was already too many.

Our story begins with an inventor trying out what looks like a virtual-reality headset made from a 1970s car stereo. We learn that the apparatus is really a device for recording and transmitting thoughts and experiences, and its inventor Dr. Brace seems driven to obsession to perfect it. He still seems reluctant when he has to team up with his wife, Karen, who manages to get the device down to manageable size. Meanwhile, the inventor and his colleagues seem determined to one-up each other in recording or simulating strange and increasingly dangerous experiences. Things finally go too far when a coworker dies of a heart attack and leaves a full recording behind. Brace must decide what kind of legacy he wants to leave behind, but it becomes a race against time when the military decides to take control of his research.

Brainstorm was the second film by Douglas Trumbull, 9 years after the independent/ low-budget film Silent Running, and following a return to effects work in Star Trek: The Motion Picture. The movie starred Christopher Walken as Brace and Natalie Wood in her final role as Karen, with veteran Louise Fletcher as Lillian, whose on-screen death is recorded with the machine.  The movie was filmed mainly in late 1981, before being interrupted by the actual demise of Wood (which I am choosing not to go into). Trumbull ended up in a lengthy fight with MGM to finish the film, which was ultimately paid for in part by the insurer Lloyds of London. The final budget was estimated as $18 million, compared to an estimated $10M box office in limited release. The movie soundtrack was composed by James Horner, who scored his breakthrough film Star Trek 2: Wrath of Khan as well as Krull while the film was awaiting release.

Out of all the movies I have watched for this feature, this is possibly the most unsettling to watch based on its history alone (and I have covered at least one film tied to a real-life homicide before). Viewed on its own merits, it feels like nothing more or less than an “evil twin” to Tron, which would have been made at effectively the same time, though on further comparison, it’s almost embarrassing how well and maturely the present film handles the subject matter. Add in the real-life tragedy, and the film’s already dark storyline gets extremely uncomfortable, very possibly to the point of being unwatchable. What tempts the viewer to become invested is knowing just how much pure Hell those involved went through to make it. It’s only when you get a good way in that it becomes apparent just how many later films are anticipated here, conspicuously Sneakers, Flatliners, and even Ready Player One. It’s all the more jarring when compared to Silent Running, which couldn’t stand up to the science of its own time; this film, on the other hand, gets so far ahead that it seems to “belong” more to the 1990s more than the 1980s. Ultimately, however, it becomes all the more frustrating that the actual movie still isn’t that good.

Going down to the details, the one thing to bear in mind is that the movie gets a lot of things right at the start. This is something where Trumbull should by all means be given credit, especially considering the problems in his previous work. The first half-hour at least is a top-notch job of worldbuilding, with any number of small details adding to the whole. This includes some scenes that could be easily criticized as random or pandering, like a sequence where one of the lab crew wears a streamlined version of the helmet on a waterslide, but it all follows naturally from the premise. It’s further sustained by a sense of enthusiasm and energy from both the characters and the filmmaker, at times reaching into true “sense of wonder” territory. A darker mood sets in by the 40-minute mark, yet the story does adjust accordingly, providing moments that are genuinely moving and others that are every bit as disturbing as they should be.

It’s really only after the first hour that the movie’s flaws really start to overcome its strengths. It would be easy to put the blame on Lillian’s death, which I’ll get to in more detail momentarily; certainly, that is the likely point of no return for anyone already put off by both the story and production history. But what stands out far more to me is a seeming effort to rehabilitate Brace/ Walken far more than he needs to be. Up to this point, he has been a flawed and troubled character, clearly at risk of going over the edge without much of a push. In the final act, however, he is very quickly set up as a borderline martyr, simply because he is suddenly displeased with what others want to do with his work. I am absolutely convinced that this is exactly where the movie fails. What should have been a literal inward conflict is largely replaced by a routine melodrama, with no corresponding sense of resolution for the character. What is far worse is that it’s here where the movie is drawn out much longer than necessary, turning what could have been intriguing and introspective at 90 minutes into a slog that approaches 2 hours.

Meanwhile, I knew as soon as I watched it that the “one scene” for this movie would be Lillian’s demise. It’s amply foreshadowed by previous complaints of chest pain (which we now know isn’t always experienced by women at risk), but then downplayed when the men are working on a simulated jet flight. Only then do we jump to Lillian, working alone while music plays. She has a convulsion that knocks over a boombox, and at first she is only annoyed. When the pain clearly grows worse, she scrambles for medication, then for a phone, all while Horner’s very familiar horn motifs play. Abruptly, she gives up and makes her way to the machine, which she starts quite methodically. As the lights flash and the screen comes online, she goes through a final convulsion, and it looks as if she is already done for. Still, the machine keeps running, clearly registering something. The cameras stay on the screen and instruments, right until the readings level off. Only then does the tape come to a halt, with one last cut to Lillian still at the controls. It’s all truly harrowing, and at the same time startlingly low-key (music and all). The real problem is that nothing in the remainder of the movie comes close to building on it.

In hindsight, Brainstorm is a movie that is bound to feel “off” for reasons far beyond its already considerable flaws. Still, it continues to stand out as a worthwhile experiment, all the more so for the ordeal that those involved went through. I rate it in the middle of my scale, which is exactly where I would say it belongs on its own merits. At the same time, I must admit that the urge to find a movie that was cursed from reaching its potential is almost certainly wishful thinking. What we really have is the work of a filmmaker as flawed as the characters on the screen, who with his best efforts had finally reached the borderline between competent and good. All in all, that’s impressive enough, and possibly better than he might have done under more ideal circumstances. I for one am more than happy to move on.