Space 1979: The one that's a zombie movie with only one zombie 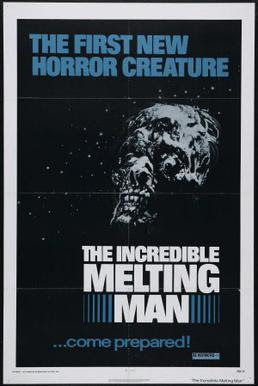 In the course of this feature, one thing that’s given me very few surprises is comedies. I anticipated back in my Introduction that I wouldn’t be doing that many of them, and many if not most of the ones I have covered have been ones I already had in mind back then. Something I do find noteworthy in hindsight is that hardly any of the comedies I’ve reviewed have been from filmmakers who came up on my radar again. Dark Star and Night of the Creeps were debut features for new talent who soon moved on to much higher-profile work. Critters and Caveman came from filmmakers who otherwise stayed within “mainstream” circles. Killer Klowns From Outer Space was made by a crew that never helmed another film. It’s therefore rather too fitting that the first “repeat offender” in this category would be the one who already had the most mixed of results. I introduce The Incredible Melting Man, a film by the same guy who made Galaxina.

Our story begins with astronauts in space, one of whom eloquently describes viewing “the sun through the rings of Saturn”. Jump cut to Earth, and we learn that the mission has gone awry, leaving several astronauts dead with the commander and sole survivor under observation. Things go further amiss when the astronaut breaks loose, killing a nurse who panics at his appearance. It soon becomes clear that the astronaut is deteriorating into a zombie-like creature with an appetite for human flesh. The story proceeds with alternating scenes of the titular “melting” man, a sympathetic doctor and assorted military brass trying to find him, and various innocent bystanders who cross the creature’s path. Things get literally close to home when the astronaut turns up near the home of his old friend the doctor, whose wife is expecting. With help from a lawman who sees through the coverup, the friendly doctor tracks the astronaut to a power plant (I think). Can friendship reach the monster? Will the authorities help or make things worse? If you’ve seen literally any other movie, you can already guess that this won’t end well.

The Incredible Melting Man was probably the most successful film by William Sachs, previously known for the “satirical documentary” Secrets of the Gods. The film was produced and distributed by the notorious AIP, which Sachs criticized for edits and added scenes that downplayed comedy elements in the original script. William Rebar was cast in the title role of Steve/ the Melting Man, with Burr DeBenning as the doctor, Ted Nelson. The makeup and creature effects were provided by famed effects guy Rick Baker, who also worked on the AIP-distributed Squirm. His effects were reportedly scaled back, in part because Rebar refused to wear several prosthetics that were proposed or built. The movie was commercially successful and would be mentioned as an influence on a number of later sci fi/ horror filmmakers. The demise of Emil (played by Paul McCrane) in Robocop was acknowledged by Rob Bottin as a direct homage to the film. Sachs’ subsequent output shifted toward “straight” comedy and action/ adventure, as early as the 1979 film Van Nuys Blvd, with 1980’s Galaxina being arguably his last science fiction film.

In my own recollections, this movie is first and foremost one whose concept intrigued me far more than the film itself ever could. At one point, I even thought of using it as the basis for an Exotroopers adventure, with a very different conception that I quickly dubbed “The Wax Man”. Thinking about it further, I believe that only an animated film could have really done justice to the idea. What the movie showed instead strikes me as a case of “too much and not enough”, too silly to be truly unnerving and too gory to be comical. At any rate, I know I saw the movie on Netflix streaming ages ago, and I looked it up again as a possible entry for the Revenant Review. At the time, I wasn’t even satisfied that there was enough here to support a review. Still, I kept it in mind, and when I thought of a “repeat offender” series, it very quickly came out on top. So I watched it again, doing my best to try to find some sense in all of it. The final verdict is that I could still barely work with it.

The one thing I can say in the film’s favor is that I have no trouble at all believing that it was meant to be a comedy. To begin with, a good chunk of the film is off-balance vignettes that show the creature interrupting ordinary and usually silly situations; the best of the lot is when a group of kids run into the monster. There is plenty of dark humor in the astronaut’s dissolution, especially the early discovery of an ear, accompanied by a steady stream of pseudoscience and flat nonsense, including the egregious pronouncement that the melting man is somehow getting stronger as his condition advances. We also get effective, mannered satire from the military men, who never seem to consider not implementing a coverup. What really seals the deal is the music, provided by the late Anton Ober, who went on to score Child’s Play and the theatrical version of Robotech. The music is full of riffs, non sequiturs and willful cliches, including a repeated chord that seems to have been ripped straight from a “stoner” movie. It’s tempting to wonder further if the soundtrack was the one thing the studio couldn’t change on short notice.

Unfortunately, it’s the story and characters that don’t do nearly as well. It’s not hard to sympathize with the doctor, while the military men are developed enough to see their point. On the other hand, the wife feels pushed in for obvious effect, and I needed the second viewing just to figure out several other characters were related to her. The story all builds up to the pointedly tragic finale, which is where different viewers are likely to go in different directions. On one hand, it finally and effectively utilizes the relationships among the characters, with a legitimate twist. On the other, it represents a jarring shift in tone from the rest of the movie, and still feels uneven in itself; certain scenes and shots are dramatic and dark, while others just seem willfully over the top. What lost me every time is that it’s all followed by an incomprehensible sequence where a groundskeeper cleans up what’s left of Steve, shaking his head all the while without really seeming to register what he’s dealing with.

For the “one scene”, there was truly only one choice, and it is very early in the movie. Just a few minutes in, the astronaut is in a hospital room covered in bandages. When the doctor and nurse leave he rises and uncovers his face in front of a mirror. His face is already hideously scarred,  sending him into a frenzy. That is when the nurse returns; she screams and retreats, without making any attempt to summon help or lock the door. (In the process, she drops a jar of blood a doctor ordered for the patient, in one of many “scientific” touches that really have no further bearing on the story.) As the music goes into one of its most madcap riffs, she races down the hall far ahead of any sign of pursuit; it’s worth further note that she looks more plump than pretty, which on a “real” nurse would mean solid muscle. She is still going full steam when she reaches the glass door, and literally goes straight through it. It’s silly, it makes no sense, but it works and it genuinely sets a mood and tone for the movie. Unfortunately and as usual, the rest of the film never really lift up to it.

In the final assessment, I have given this movie and Galaxina the same rating, but for nearly opposite reasons. Galaxina was a movie that really tried to do something interesting, and it succeeded well enough that I could recommend watching it despite its flaws. This one, on the other hand, feels like nobody would or could invest their full energies into it, with the possible exception of Sachs himself. It doesn’t help that on both occasions, the filmmaker protested about studio interference, which was undoubtedly true up to a point but is much less convincing repeated twice. I can’t quite actively hate this one, or else I would rate it lower than I have, but I certainly wouldn’t look forward to seeing it again. I would once again say I’m happy to move on… except I’m still on the “repeat offender” lineup, and what’s ahead could make even this look good.