Space 1979: The one with a killer asteroid and Sean Connery 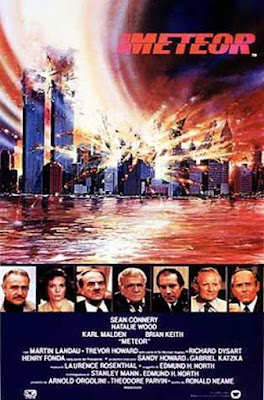 After Repeat Offender week, I’ve been taking a little time to decide what I wanted to do with some leftover material. In a fairly typical bout of irony, I decided to take a break with a movie I had in mind at the very beginning, another one I saw long ago and never looked up again. Only then did I realize that I had the perfect storm of repeat offenders. This was a movie from the studio that made (or bough/ stole) The Incredible MeltingMan, Squirm, The People That Time Forgot and Futureworld, with the stars of Brainstorm and Zardoz. On top of that, it intersected with The Green Slime, which I previously introduced as the first appearance of a now-familiar sci fi theme that to my knowledge didn’t surface again until the present movie 11 years later. With that, I present Meteor.

Our story begins (after a very ‘70s futuristic credits sequences) in space, with a view of a comet and tumbling asteroids, accompanied by ominous narration that ends with a closeup of an asteroid referred to as Orpheus. We then go to a distinguished gentleman on a sailboat, whose voyage is interrupted by a government vessel announcing that his presence is needed. We learn that the gentleman is a former NASA scientist named Paul Bradley, who quit over a project called Hercules. A briefing from his former boss reveals that a comet has knocked the 5-mile-wide asteroid Orpheus (referred to very persistently as a “meteor”) into a course towards Earth, destroying a manned exploration vessel in the process. Dr. Bradley quickly comes up with a decent plan: Rather than try to blow up the asteroid, detonate a volley of nuclear weapons in its path to deflect it into a stable orbit. To do it, however, they need to launch the weapons from space, and a round of conspiratorial intrigues establishes that the USA and the Soviets have already parked nukes in orbit to blow up each other. At Bradley’s urging, the two nations join forces, which brings him in contact with a very pretty Russian scientist. Meanwhile, several smaller asteroids are incoming, generating plenty of disaster footage. Then, as the time to launch approaches, the team learns that a “big one” is headed for their position, forcing them to choose between escaping or completing the mission.

Meteor was a production of B-movie mill AIP and the equally notorious Hong Kong studio Shaw Brothers. The film was clearly intended to capitalize on disaster films from earlier in the decade (also a common denominator in The Black Hole), to the point that The Poseidon Adventure veteran Robert Neame was brought in to direct. Where both studios had previously specialized in low-budget films, the production received a budget estimated at about $16 million. Much of the money clearly went into a high-profile cast, including Sean Connery as Dr. Bradley, Natalie Wood as the not-quite romantic interest Tatiana, and the likes of Martin Landau, Henry Fonda and Karl Malden as various supporting officials. The movie was filmed mainly in 1978,  but a planned mid-1979 release was delayed until the end of the year for additional work on its special effects. The finished film reportedly included footage from the film Avalanche, produced by Roger Corman. On release, the film received negative reviews from critics and failed to appeal to audiences, resulting in an estimated box office of $8.4M.

For my personal experiences, this is yet another movie I first encountered on 1990s TV, probably early in the decade. Once again, I didn’t give it another try until I watched it for this review. With a recent viewing as a frame of reference, I must conclude this movie didn’t leave much of a mark even in my usually uncanny memory. What I mainly remembered was the plan to deflect the asteroid, which I only noticed being explained quite late in the movie. (Unfortunately, the filmmakers don’t seem to have recognized that nuclear weapons are still limited by a vacuum.) On further reflection, I have been wondering if I might have missed the first part of the movie, though outside of a few brief scenes in space, the first part of the movie is exactly the kind of clunky character development kid me would have tuned out. I do very vaguely remember some of the disaster sequences, which really feel like 2 or 3 disaster movies for the price of one, as well as some tension in the finale, which I genuinely thought was going to have some kind of double cross until I got through to the actual ending.

What I can say first and foremost is that this movie has some of the best production values I have encountered, especially for a film made before ca 1980. Of course, it’s obvious that the filmmakers paid more than enough to ensure it, but it’s still impressive. For the most part, this is further reflected in good dialogue and a solid, linear story, with the only downside being that much of it feels like it belongs in a documentary rather than big-budget “entertainment”. Even the effects are quite good for the time, and in many ways more realistic than many films of the following years. The flashes and streaks of light are actually just about what one would really see from explosions and impacts in space. For that matter, the only real scientific misfires are an impact in New York City that looks more like Godzilla plowed through it and a single overdone pyrotechnics sequence when the missiles start slagging the asteroid.

The problems that keep cropping up all lie in the finer details, and it is very much a cumulative “uncanny valley” effect. To begin with, the film could easily have kept down to 90 minutes, and certainly didn’t need to be over 100, making the actual 1 hour 47 minutes run time far more taxing than I can easily explain. A good part of that is the Cold War political intrigue, which amounts to some clever barbs dragged out into a good part of the movie. Another thing that stood out to me was the heavy use of “translated” Russian, which anyone in science and academia would recognize as unnecessary given how widespread the use of English really is. (Understanding a foreign speaker’s idea of English is another matter…) Then there are Connery and Wood, who both deliver very good performances but never quite feel like they belong in their roles. This is most obvious with Wood, who is no more convincing as Russian than Connery would be as a Minnesotan. But there are also plenty of problems with Connery, who was more at home on the sailboat than he ever is talking to the scientists, politicians and military brass. It may be just as well that the script never really says what his backstory is, or they might have tried to tell us that he really is supposed to be om Minnesota.

At this point, it’s really already time for the “one scene”, and it has to be a sequence when a lesser meteor lands off  Hong Kong. The impact triggers a tsunami, narrated by one of Bradley’s colleagues. The effects are by far the most effective of the movie, fully matched by shots of panicking crowds who really don’t seem that disorganized. The cameras take time from the bigger picture to follow a man and his wife as they meet at their apartment before fleeing the city. There’s a standard but well-realized heartwarming moment as the woman readies their child to travel, and the guy grabs their dog. The pair remain recognizable as they rejoin the crowd, just in time to discover that the tsunami has already surged ahead of them. There’s a last poignant cutaway to the scientific colleague, who matter-of-factly dismisses the possibility of leaving the city. It ends with the wave literally crashing through the windows of his observation room. It’s a scene that would probably be as cliched as it sounds from a western studio, then or now, but with the Shaw Brothers crew onboard, it has the same unaccountable authenticity as a Toho kaiju movie.

In full hindsight, the real problem with Meteor is simply that it’s a realistic science fiction movie which tried to play by its own rules. For as much well-deserved hate as Armageddon and The Green Slime receive, they did the dramatically “right” thing by putting the heroes in space. This movie shows just how poorly the alternative fares in the motion picture medium, no matter how what the much star power and effects are put behind it. Despite all the efforts to add drama, the whole story amounts to people on the ground pointing automated orbital equipment at a threat and pushing the button to fire, and that is as exciting on film as watching someone else play a video game without seeing the screen. The fact that this is indeed how space exploration and research was increasingly carried out just shows why Star Wars-style “science fantasy” was handily outperforming 2001-style realism in theaters. Add in this film’s already considerable flaws, and we’re left with one more reasonably competent film that never manages to get from good to great.

Image credit Prince Planet Movies, which has a fair review of the movie.