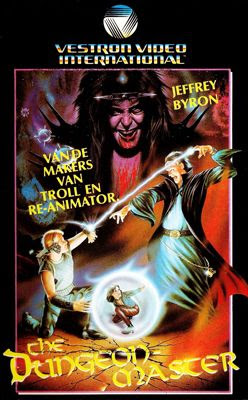 Title: The Dungeonmaster aka Ragewar

At this writing, I’m still in the “repeat offenders” lineup, with a bit more material under consideration than I originally planned, and even by the standards of this feature, what I have left is bad enough to sap my morale. I decided the best option was to throw one more in the mix that’s actually good, so I turned to a movie I had long been considering from a crew that has already turned up repeatedly. So here is The Dungeonmaster, from none other than Charles Band and Empire.

Our story begins with a scene of a woman we never see again being kidnapped by goblin-like creatures, followed for no obvious reason by some very 1980s aerobics/ dance sequences. We then meet Paul, a hotshot computer programmer who apparently dreamed the opening melodrama, and his artistic live-in girlfriend Gwen, plus a computer he calls “Excalibrate”. It turns out Paul is ready to get married, but Gwen isn’t so sure. While she is thinking it over, she is taken captive by Mestema, an evil sorcerer in search of a new challenge. The warlock then presents Paul with a chance to free her by completing seven trials spread through time and space. The adventure drags the hero and his lady from landscapes of myth and fantasy to the dangers of a post-apocalyptic wasteland. Fortunately, Excalibrate is along for the ride as a protective gauntlet whose powers adapt and expand for each new world. However, Gwen adjusts a little too well when they arrive in a very familiar cityscape, accepting a new identity that puts her in the path of a killer. It’s up to Paul to save her, but first, she must remember who they are!

The Dungeonmaster was a production of Empire Pictures International and senior producer Charles Band, originally titled Ragewar: The Challenges of Excalibrate. The film starred Jeffrey Byron as Paul, Richard Moll as Mestema, and Leslie Wing as Gwen. Byron was also credited as cowriter of the script, the only writing credit in a long career in TV and movies. The film was divided into several semi-independent segments with a total of seven directors, including Ted Nicolaou, who went on to direct Terrorvision, stop-motion animator David Allen, and Band himself. A version of the movie was released with a PG-13 rating from the MPAA, very soon after the rating was introduced; this may have been a 73-minute cut of the movie sometimes listed. More recent home video releases feature a 77-minute cut that would almost certainly be rated R in a modern theatrical release. A famous and frequently repeated clip from Mythbusters appears to have been a direct (if possibly unconscious) quote from the movie by Adam Savage.

Going straight to my personal experiences, I had absolutely no knowledge of this movie until I watched it from Netflix streaming, one more thing that disappeared long ago. At the time, it made a favorable impression, and I immediately noticed the Mythbusters connection (which I will get to further on). As usual, I had to buy it on disc to watch it again, a few months before the present review, but fortunately, it proved to be available in a very inexpensive 4-pack. As far as I remember, I went in with no doubt it would be here sooner or later, but the very odd nature of the film put me off enough that I left it as one more for the “maybe” lineup. By the usual procedure, I gave it another go when I decided to review it. Even with a recent viewing under the belt, however, it still wasn’t what I was expecting, and not always in a good way.

The first and foremost thing I can say about this movie is that it has more than enough “good” to stay in the memory long after initial viewing. The effects, sets, and costumes are all up to the usual Band/ Empire standards, especially a stop-motion giant statue in Allen’s segment. The story is willfully disordered, but the pace and tone are just right to keep the movie going. What really shines is the dialogue between Byron and Moll. The villain is the kind of character that should be ludicrously cliched, but instead goes out the other side into archetype territory. The performance from Moll, previously sighted as the ice creature in Caveman, is priceless, delivering the usually boasting and threats with the occasional surprisingly personal revelations. It’s worth further note that the extra touches make it clear that the character was once human or at least mortal (despite certain references elsewhere in the script), while leaving his backstory appropriately mysterious. The hero is more than satisfactory as a foil, speaking out for virtue, enlightenment and the value of human fallibility. The high point of the repartee is surely when Paul gives a quite accurate account of the principles of ahimsa, very possibly the last thing people would expect me to have an interest in.

Unfortunately, the flaws of the movie are equally obvious, if not always easy to define. The episodic format inevitably leads to a few misses, conspicuously the Mad Max-inspired post-apocalyptic segment, and the length of certain segments contributes to the problem. This shows most in the segment set in a modern city (the one credited to Byron), which starts intriguingly but relies on increasingly contrived developments to move ahead. What weighs the film down far more is the disconnected nature of its scenes, an issue already seen with The Day TimeEnded from the same crew. The “random” approach can make for good fun for a while, but past the hour or even half-hour mark, it definitely begins to wear thin. What is perhaps worst of all is that Mestema rarely if ever directly involves himself in the challenges. This helps preserve the “quest” narrative device, but it also postpones the confrontation between the main characters, to the point that the otherwise satisfying dialogue between the pair starts to feel more and more like empty posturing from both sides. It doesn’t help that the final battle we do finally get is more like a pro wrestling match than a duel of the fates.

For the “one scene”, meanwhile, my choice is an early sequence where Mestema sends Paul to what looks like the Greco-Roman underworld, directed by John Buechler, who would go on to rival Allen as the lead effects guy for the Band crew. He is greeted by a horned creature, portrayed with an iffy-looking puppet that resembles a faun more than a demon. (How closely the posited battle of good and evil lines up with Judeo-Christian theology is repeatedly raised but never resolved.) The lord of the underworld promptly summons a squad of zombie-like minions, representing possibly the best effects of the film. Of course, Paul quickly bests the undead, so  the horned creature follows up with a far more sinister vision of the hero’s own undead body, representing his supposedly inevitable defeat. But Paul promptly dispels the apparition, through means that aren’t really explained, leaving the demon-faun apparently impressed. Then Mestema’s voice calls down, warning him that what he has seen is a “future reality”. Paul responds with the line immortalized by Mythbusters: “I reject your reality and substitute my own!”

Rating this movie has been an especially difficult decision. I finally decided the best frame of reference was the other Band films previously featured here. By that standard, it’s certainly an improvement over The Day Time Ended, and vastly so over Laserblast. Comparisons with Terrorvision and Dr. Mordrid are more difficult. This is certainly a more ambitious and sophisticated production than the later films, but we have already seen that the Band crew was usually better off with simplicity. I finally went with 4 out 5, because I genuinely like this one and also because I’ve been getting a little tired of my recent streak of movies that can’t do better or worse than 2 or 3. This is certainly well above the rest of that lot, even if it doesn’t feel as good as it “should” be. If you just want to have a bit of fun, you can do a lot worse. Trust me, I checked.