Space 1979: The one that was stomped by its sequels 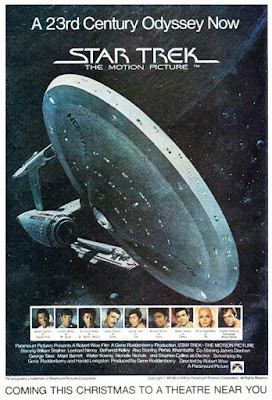 When I came up with this feature, some of the first decisions I has to make were how to deal with “franchise” movies. For the most part, this really didn’t pose any significant difficulties; if a movie was enduringly influential and popular in its own right, especially when Star Wars was already on the board, it wasn’t within the scope of this feature. I quickly decided on the further policy that sequels were fair game, which allowed me to cover the franchise trends. Still, there was one movie where no decision has ever felt quite right, and once I decided to keep this feature going, I knew I was going to have to get to it. Here is Star Trek The Motion Picture, the oddest, most mistreated and most unclassifiable movie that ever happened to spawn a franchise.

Our story begins with a tense confrontation between the Klingons and a mysterious object that promptly wipes the floor with their fleet. We then catch up with Spock, who has completed his training in the quasireligious discipline of Kohlinar, Kirk, a now-Earthbound admiral, and the Enterprise itself, now refitted and under a new captain named Decker. When word arrives that the object which destroyed the Klingons is headed for Earth, Kirk pulls rank to retake command of the Enterprise, leading to tensions with the new commander. Along the way, they pick up a new crew member named Ilia, who makes a point of informing Kirk of her vow of celibacy. The crew manage to intercept the object, which proves to be a vast automated world-ship that dwarfs even the Enterprise. After a further attempt at contact goes awry, Ilia is seemingly disintegrated but then reborn as an avatar of the world-ship’s intelligence, which identifies itself as Veeger. The world-ship mind further reveals that it believes Earth holds the secret to its own origins, but views humans as “infesting” vermin. It’s a race against time to find the true nature of Veeger, before its search destroys Earth.

Star Trek The Motion Picture was the product of Gene Rodenberry’s efforts to revive the franchise. While preproduction for a Star Trek film existed as early as 1975, the project did not advance until 1978, following the success of Star Wars and also Close Encounters of the Third Kind. The movie was directed by Robert Wise, a “mainstream” director who had broken into science fiction with The Andromeda Strain. The effects were provided by John Dykstra and Douglas Trumbull (see Silent Running), with much of the work being completed entirely in postproduction. The score was composed by Jerry Goldsmith, including a main theme that was directly reused for Star Trek: The Next Generation. Reports would emerge of delays caused by problems with the effects as well as significant pressure to meet a late 1979 release date. The movie was finally completed for an estimated $44 million, and earned $139M at the US box office. A tie-in action figure line was released by Mego, who had previously produced toys based on the original series. Other merchandise included McDonald’s Happy Meals and a novelization by Gene Rodenberry.

Looking back on my own experiences, what Star Trek The Motion Picture makes me think of is the Street Fighter video game series. Back when I was transitioning from elementary to middle school, everybody was playing Streetfighter 2, and it was obvious from the name that something had come before it. However, even when I asked around, I only ever met one or two people who said they had seen or played the original game (or knew someone who had), and most people really didn’t seem to care. “Trek 1” may never have quite sunk to that level of obscurity, but it’s well within the ballpark, especially for anyone born in the 1980s. We talked about Wrath of Kahn, we talked about Search For Spock, we talked about Next Gen, we talked about Final Frontier, but nobody was talking about The Motion Picture.

I finally did see “Trek 1” in college, and then probably only about two-thirds of it. It still stands out to me as a strange and disorienting experience. It was especially odd hearing what I knew and grew up with as the Star Trek: The Next Generation theme accompanying a big-budget movie with the original-series cast. I recall the music and effects kept the movie tolerable and even interesting for quite a while. What starts to feel uncanny is how many other movies it anticipates, especially once we see the world-ship up close: The alien city of The Abyss, the mothership interior of Independence Day, even the Death Star chase in Return of the Jedi, which was still a few years ahead. What I find myself hard-pressed to convey is that it just keeps going, and that has remained my exact reaction every time I have watched this movie since then. Of course there are good scenes, but it is a case of the whole fundamentally changing the parts. It’s good fun watching the crew get back together, for the first hour, but this movie goes on for 132 minutes. It doesn’t help that the ending still feels completely tacked on, lending credence to the darkest rumors that the studio simply sent out prints of the film “as is”.

What stands out all the more, and represents a major reason for this review, is that the film feels like it was made for the 1960s rather than the ‘80s, and that can be laid squarely at the feet of the crew involved. Trumbull (who is still alive!) stands out as the big target, especially based on Silent Running. His literally ponderous effects shots are certainly a big part of the problem here, but there is a certain chicken/ egg problem in blaming him; his most problematic tendencies were all ones that a tighter script and better direction should have kept in line. That brings us to Wise, a veteran director who was arguably struggling with the pacing of modern sci-fi action/ adventure even back in The Andromeda Strain. But the one who stands out to me is Gene Rodenberry himself. There were simply too many areas where he had carte blanche, at least for a while, including the first known drafts of the script. Looking at things from this angle cements a further feeling I have already had, that the story feels like an original-series episode drawn out to feature length. A final irony is that I have gotten the same sense from Final Frontier/ Trek 5, the one “odd” franchise movie to get somewhat more favorable appraisals over time.

Now it’s already time for the “one scene”, and there is indeed just one that has stuck in my memory all along, possibly the franchise’s first transporter accident. It all starts partway through the first act, when the Enterprise is beaming crew aboard, and suddenly we’re reminded that this is after all equivalent to going from LA to New York by fax machine. An alarm suddenly sounds, and Mr. Scott immediately warns not to send anyone else, but we learn that two more crew are already on the way. Scott and Kirk rush to the transporter room in time to see two figures begin to materialize. At first, it looks like Scotty might save the day, until the outlines start to change. For a moment, we see human flesh, clearly distorted, and then there’s a scream. Abruptly, both figures disappear, and Kirk calls to figure out what has happened. Someone answers succinctly, “What we got back didn’t live long… fortunately.” It’s a remarkably dark scene that doesn’t really fit with any other part of the movie. More’s the pity, because this is exactly the kind of subversive tweaking that could have brought Trek into the era of Alien.

What I still find myself at a loss to do is rate this movie. I seriously debated leaving this one unrated (see House), but that was too much like a punt. I felt strong enough in my criticisms that I would have been happy to give it the lowest rating, but that too felt like a copout. The rating I have given is the one that felt appropriate all along, though I still don’t count it quite as bad as sequels like Futureworld and Superman 3. One may still argue whether it is “worse” than Final Frontier or even Search For Spock, but to me, it certainly remains the most disappointing entry in the franchise. With that, I move on.